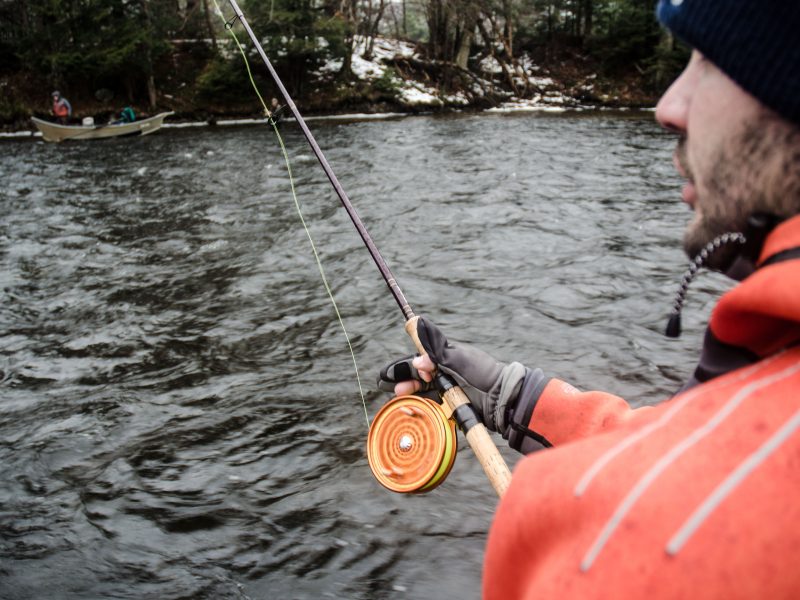 One of the challenges of booking a fishing trip way in advance is that you have no control over the conditions you’ll be fishing. It’s for that reason that I usually don’t commit to a weekend trip to the Salmon River until after checking the water level, the weather, and the reports on the Thursday night before. If the weather or water look out of whack, I’ll pull the plug. It’s a proven system for solo runs to the river, but one that rarely works for groups.

So when Anthony DeiCicchi and Ryan Bibeau told me they were determined to go steelhead fishing this winter a couple months ago, we checked our schedules and and talked to our significant others and landed on the weekend of January 16 and 17. As we watched the weather and the reports in the weeks leading up to the trip, things were looking great. And then, on January 15, unseasonably warm temperatures and rains washed snow into the river and dropped the water temperature several degrees just in time for us to pull off I-81 and onto Route 13 in Pulaski, New York.

We stayed at Tailwater Lodge. It was my second time there, the first being during a shoot for OTW TV last December. Tailwater was converted from an old schoolhouse—the school’s gymnasium converted into the bar—located right on the Salmon River’s Schoolhouse Pool, where guests enjoy exclusive access to 1700 feet of riverbank.

While the accommodations were excellent, the fishing was not. We fished with Mike De Rosa from Zero Limit Adventures, Tom Fernandez from Tailwater Lodge, and Jeff Waner from Osprey Adventures Guide Service. Unfortunately, the recent drop in water temperature shut down the steelhead, and our party of three went fishless. The only excitement came toward the end of the day Saturday when Anthony, a steelhead first-timer, hooked up on 12 pounds of angry steelhead that showed itself briefly before sprinting 50 yards downstream where it spit the hook. The battle lasted no more than 30 seconds before the steelhead won, but it made a lasting impression.

“I can’t wait to go back,” Anthony said on the ride home Sunday night, despite the slow fishing. “I need to go back!”

I understood. It was the same feeling I had after my first trip to the Salmon River back in 2009, one that I’ve felt on every trip since, whether I landed 10 steelhead or zero. It’s the type of fishing that gets into your blood the second you feel the power and speed of a big lake-run rainbow trout. Anthony and I will plan a return trip to the Salmon River soon, but next time we won’t commit until the conditions look perfect.