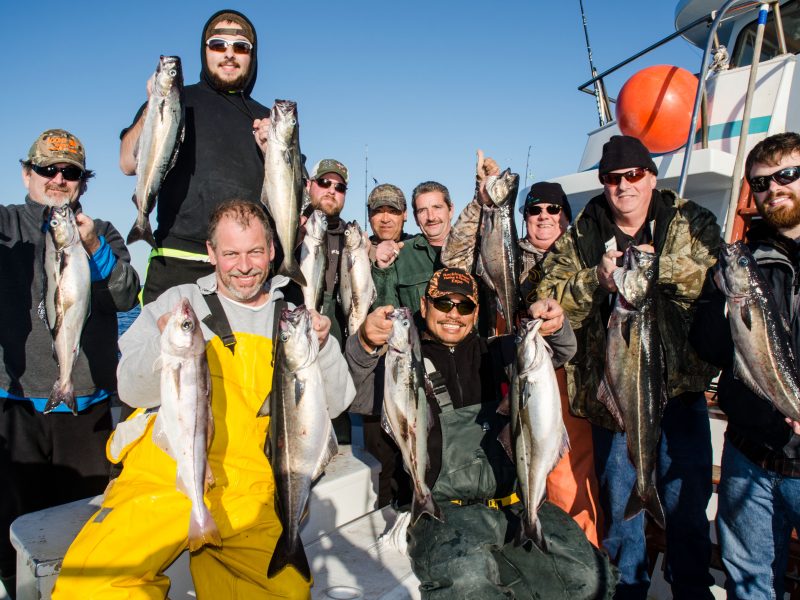 I was running late, leaving my co-worker, Anthony Deicicchi, sitting on a cooler at the end of his driveway for 30 minutes in the early morning cold. When I finally arrived, and Anthony loaded his gear, all was forgiven as we made tracks for Seabrook, New Hampshire in an effort to keep our saltwater season alive into December.

Two days earlier, when making the calls for the Thursday Fishing Forecast for OnTheWater.com, it was pretty clear that saltwater fishing opportunities were waning fast in New England. Besides rumors of a few tog lingering in Buzzards Bay and mackerel in the East End of the Canal, the only reports on Cape Cod fishing were about freshwater.

Every season, when the tog fishing tapers off and the stripers make their exit, most fishermen in New England winterize their boats and get them out of the water by Thanksgiving. The saltwater season doesn’t have to end, however.

South of the Cape, cod move into the waters off Block Island, while north of the Cape, pollock and haddock feed heavily. The ticket to catching these fish, and providing a saltwater fishing fix through the cold winter months, is hopping aboard a headboat. Many headboats run trips year round, fishing for whatever is available and in-season, bridging the gap between the end of the fall run and the arrival of the first spring schoolies.

With that in mind, Anthony and I booked spots on the Saturday morning open boat trip with the Eastman’s Fishing Fleet, bound for Jeffreys Ledge, and the pollock and haddock that live there.

We met Anthony’s brother, Dave, and friend, J.D., at Eastman’s Docks. After picking up some jigs, teasers and sinkers at the shop, we boarded the boat, picked our spot at the rail and settled in for the run to Jeffreys.

The first stop was exactly what you hope for when you board a late season party boat trip. The seas were calm, the weather was beautiful, and hard-fighting pollock had us shedding layers 15 minutes into the fishing.

We returned home with full coolers, sore arms, smiling faces, and tentative plans for our next winter party boat trip. And next time, I promised Anthony, I won’t be late.