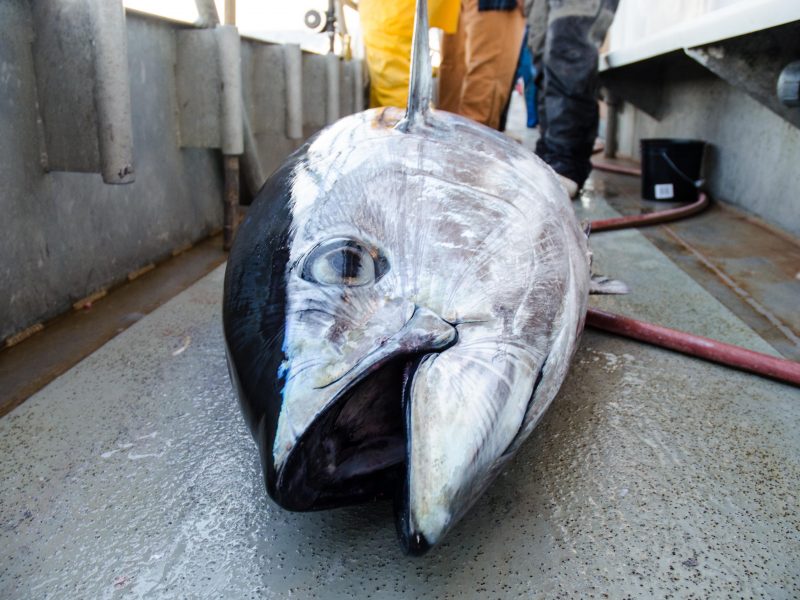 It’d been about 8 hours since I’d had a bite. While the fishing had slowed from the longfin frenzy at first light, some of the anglers aboard the Jamaica continued to pick away at tuna. In fact, the two fishermen to my left had hooked up multiple times in the past hour, and I’d noticed both had been using smaller sardines. My hook, a heavy gauge 8/0 circle, tore right through the soft flesh of the sardines, leaving me to use larger butterfish. Since all of the fish that day had been 25- to 50-pound longfin, I decided to snip off the big hook and replace it with a thin-wire 6/0 octopus circle that I used for targeting stripers with clams. I was able to hide the hook perfectly in the smaller sardines, but had no hits until Captain Howard Bogan announced he’d be pulling the anchor.

We made a short run to another spot in Hudson Canyon where  Captain Howard announced we’d be making one last drift before heading in. There were a number of trawlers working the area, but after 10 minutes of drifting, we hadn’t had a bite. I went to the back to rebait and pulled the smallest butterfish I could find out of the box, thinking maybe a tiny bait would tempt the tuna that Howard said were holding at 175 feet. The bait was smaller than a post-it note, but it hid the small hook perfectly. I set the bait out, paying out two feet of line at a time, trying to count how much line I had out. I’d sent out two-thirds of my 150-yard, 60-pound-test monofilament topshot when I felt a light hit. At first I thought I’d crossed someone’s line. The gentle tapping felt like a bluegill had taken the bait, not a tuna. So I cranked. And cranked. And cranked. Finally, the line came tight, and simultaneously I and whatever was on the other end of the line realized we’d bitten off more than we could chew. The stand-up rod bowed over and my Penn International 16 VSX—a reel I’d bought a decade ago and had only fished once—began dumping line.

The mono topshot evaporated, and I held my breath when the braid-to-mono connection—a hastily improvised loop-to-loop made with two Bimini twists that my wife helped me tie minutes before we departed Cape Cod for New Jersey—passed through the guides.

At that point, I’d given up the fish as lost. Braid dumped from the reel and I waited for the line to go slack. But it never did. Instead, the fish turned and bolted for the boat. I put the reel back in high gear and stored line, breathing a sigh of relief when the mono was back on the spool.

The relief would be short-lived, as when I caught up to the fish, it ran under the boat. I felt the line rubbing the bottom as the Jamaica’s mates helped clear the way as I made for the bow. We passed the rod under the pulpit, and the fight went from fast-paced running and reeling to a drawn out slugfest, the tuna making wide circles, occasionally running under the boat and forcing me to lean over the rail, arms extended to keep the line from chafing.

All the while, that small striper hook was in the back of my mind. A hook like that has no place in the canyons, and as the fish surged, I again braced for the disappointment of a suddenly slack line. But it never came.

We passed the rod under the front of the boat a second time, and the fish and I settled in midway down the starboard side to finish the fight, one way or the other. The mates provided instruction and encouraging words as my back and arms burned and I struggled to keep cranking. After several more minutes, we got a good look at the fish. The tuna was on its side, swimming in big circles when I caught my first glimpse of the baseball-sized eye and the huge, round body.

It took a dozen more circles before the fish passed in range of the waiting gaffs. I saw one mate lunge with the gaff, then a second, a third, and a fourth. Only then, did the line go slack. The four mates heaved and finally hauled a bigeye tuna, Thunnus obsesus, over the rail of the Big Jamaica.

When the fish hit the deck, a small striper hook fell out of its jaw, Captain Howard sounded three toots, and we headed for New Jersey.