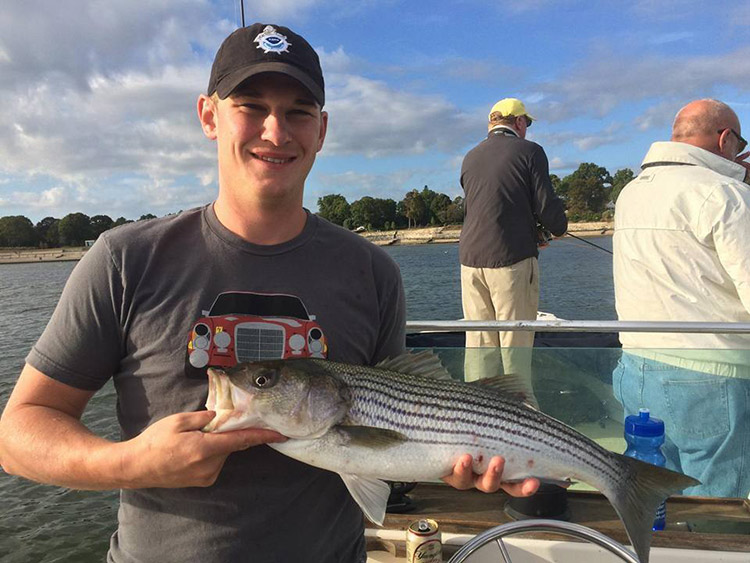 We are now into October and the fishing has been good for many species. A lot of anglers have still been chasing down albies on boat and from shore. Though since the word is out, there has been more pressure and schools can get spooky. Now we also have some nasty weather heading our way that just may push them out. Bluefish continue to keep anglers busy on the surf and in the CT River. There is plenty of bunker around and solid fish have been chasing them around in the river and harbors. Striped bass fishing on the surf is picking up as we see these fish start making the run. It seems the most productive anglers have been either trolling tubes or drifting eels. But of course that doesn’t mean you won’t get some great bass on plugs when they’re chasing bunker. Hatchetts and Long Sand Shoal saw some good fish and a few bass are mixing into the river as well. Bottom fishing for scup and black seabass was a tad rough last week as anglers needed to use more weight to battle the ripping current from the full moon. This week we heard some great reports for dinner-plate-sized scup coming from local reefs and wrecks. Same for black seabass, but I haven’t seen many big humpheads. Snapper blues are a little bigger now and they can be found in the lower river and some harbors. They’re perfect for eating or as bait for bigger blues. Tog season opens up on 10/10 so many anglers are gearing up for that now as well.

Middlebank II: As I write this, there’s a fresh northeast wind blowing and it’s promised to build almost to gale force before the weekend is over. On top of that, hurricane Joaquin is forecasted to be knocking on our door for Monday. Sometimes the fall weather pattern really puts a damper on our ability to get out and fish and mixes up any pattern we were used to. Let’s keep our fingers crossed this weather blows out to sea and say a prayer for those in its path. The past week, however, saw very good action on the grounds off Bridgeport and Stratford Shoals. Both tactics of anchoring and drifting, depended on the day’s conditions, kept our anglers rods bent. Looking for good “reads” on the depth finder just up tide or on the up tide edge of hard bottom structures, before investing our efforts fishing was the key for putting together good harvests of scup and sea bass. Once again, fresh clams, sea worms, and squid, fished on “wish bone” rigs out produced “hi-low” rigs as 8+’ super moon tides kept the fish holding tight to the bottom. Capt. Tim Griffith

Bass fishing is going strong across the state with big fish being picked up while drop-shotting and also fishing swimbaits. Great largemouth came from Candlewood, Ball pond, Coventry, Moodus, Lillinonah and Bantam. Smallmouth reports have been excellent on Candlewood, Squantz, Lillinonah, Bantam and Highland. Crappie fishing is picking up on many lakes and ponds are well. They are holding in a bit deeper water near the edge of weedlines as they chase bait fish. Now is an excellent time to slay some slabs. Pike fishing is better every day and the march of the teeth has begun. Bantam, Lillinonah, Zoar and the CT have been productive. Quite a few fish were reported in the 38-40″ range on the CT River. Walleye have become more active and October is a great time to chase some eyes. Squantz and the Saugatuck reservoir have given up a few decent fish on shiners. In the next few weeks things should get really good. Trout fishing has been excellent in many places and DEEP has been stocking around the state! Mt. Tom, Squantz, Beach pond, Stillwater pond and Highland lake are a few recently stocked places.