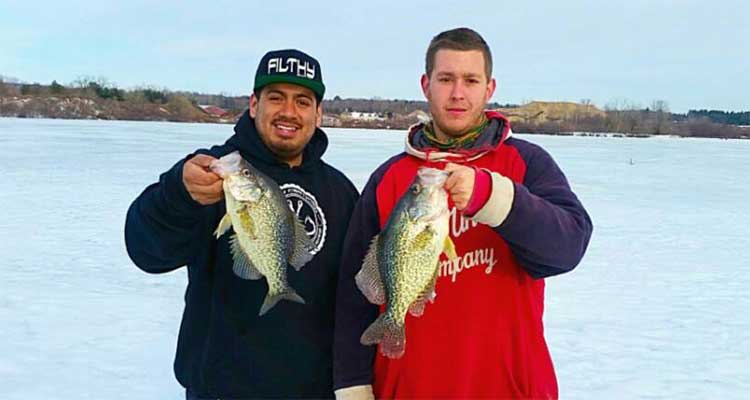 It is definitely feeling more like spring. Warmer days have snow and ice melting, and they are also giving anglers that itch. We are starting to see more open water. Tidal rivers are open and moving from the thaw and rains. Some anglers are taking advantage of that and have been getting back on the holdover schoolie striper bite. Alabama rigs and various soft plastics anywhere from 4” to 7″ on ½-ounce jigheads have been productive. When that water is moving, the fish get chewing!

CAPTION: Adrian Pinos and Justin Blejewski with some late-ice slabs measuring 14.5″ and 16.5″!

Reports were a bit limited this week with many anglers weary of the late-season ice. The edges are soft in many places and a plank is, or will be very soon, needed for access. Candlewood and Squantz are shot, Zoar is open too. The edges of Candlewood and Squantz are broken up from warmer temps, rain, and the lake being raised. Three people have fallen through at Squantz in the past week; luckily it was only into waist-deep water. When it comes to these bodies of water, it is best just to wait now to be safe. Candlewood gave up some nice crappie and a few browns right before ice conditions went south. The crappie bite has been good at Hatch, Mamanasco and Lillinonah. Yellow perch have still been chewin all over with some slobs coming from Lillinonah, lake Housatonic and upper Moodus.

White perch have been active in coves on the CT, Lillinonah and Bantam. Be sure to bring some small shiners if you’re on a meat hunt, you can quickly fill your bucket. Largemouth reports came from Pachaug, Highland, Winchester and Bantam. Smallies were reported from Lillinonah and coves on the Connecticut River. A few small pike came from Lillinonah on dead baits. Highland and West hill gave up some trout this week but they were mostly stocker-sized fish.

Other options right now are to hit TMA’s for a chance at some great trout. The upper Housatonic and Farmington have been producing some excellent fish as of late. All and all, reports are going to be a little slow over the next two weeks while the ice melts. Anglers will either take to the open water that they have or they’ll be chasing the last bit of hard water into the NW hills. Just please remember to be safe out there. Bring a spud bar to check the ice everywhere you go and wear your ice picks. Most of all, use your best judgment because no fish is worth your life.