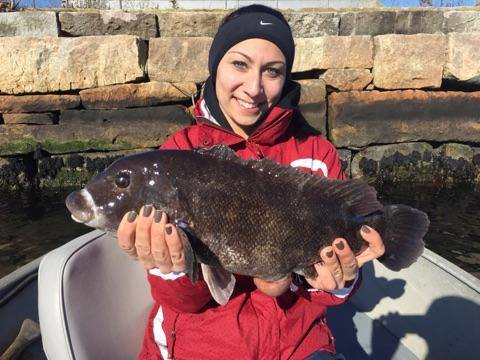 Everything is winding way down for the salt. Many charter captains are packing it up and storing the boat away for winter. But there are still some excellent tog and black seabass to be caught along reefs and wrecks if you’re willing to brave the cold. Seabass are holding as deep as ever and as water temps cool, tog will move even deeper. Good blackfish are still being boated by cold weather warriors looking to stock up the freezer for winter. Some small schools of bunker were still holding on late last week in Norwich harbor and the CT river. But after this last dip in temps they should be out for good. There are a lot of schoolies around that were blitzing the remaining bunker and moving into the rivers to holdover. These fish will provide fun for anglers all winter long and if you pursue them, you have a chance at some decent fish too. Our tidal rivers can hold some good bass during the winter and keeper sized fish are in the mix. You just really have to work for them. A few stripers up to 32″ were pulled from the Housatonic and CT rivers this past week. The finesse game will come into play as water temps continue to drop.

Anglers are getting on good bass with hair jigs this past week. Decent largemouth came from Candlewood, Bantam, Pachaug Pond, Ball Pond, Coventry and Highland lake. Good smallmouth were pulled from Candlewood, Squantz, Lillinonah and the CT river. Pike seem to be the most active right now with some serious catches coming from coves along the CT river mostly. However, a few good fish were reported from Lillinonah, Bantam and Pachaug Pond. Large two piece rapalas and cranks were productive and fire tiger was a hot color. Dead bait like jumbo pond shiners accounted for some catches as well. Walleye have been caught out on Squantz, Gardner and the Saugatuck Reservoir.

The carp bite has slowed way down with the drop in temps and It seems the season for Mr. Rubber Lips is coming to a close. Panfish action has been decent and the key to producing some nice late season perch and crappie is small shiners. These fish are suspended and don’t always give chase this time of year. So shiners under bobbers will keep your bait in the strike zone longer in order to get in on some of the action. Trout and salmon fishing are still going strong. Some good trout came from Ball pond, Crystal lake, as well as the Salmon, Naugatuck and Farmington rivers. Salmon fishing has been excellent along the Shetucket and some nice fish were also pulled from the upper Naugatuck river.

NOTE: Some anglers are already reporting skim ice on some smaller bodies of water. Try not to get too excited, temps are supposed to rise again next week. Though we are hopeful for a quick transition to the ice fishing season!