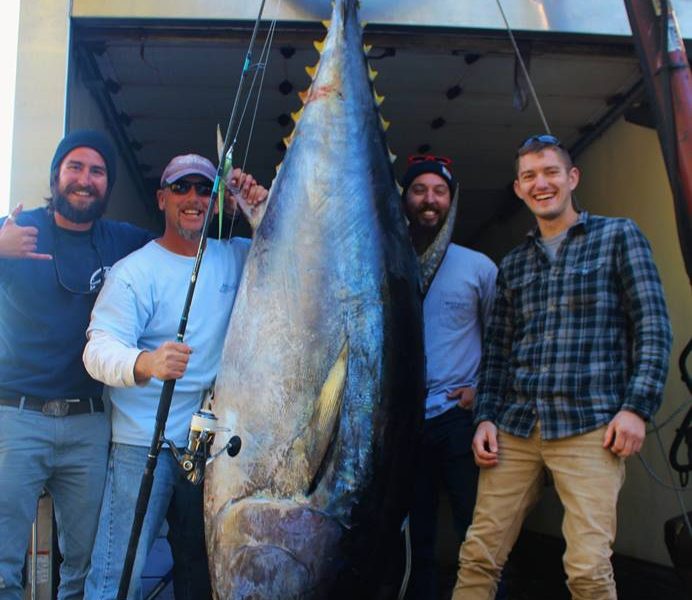 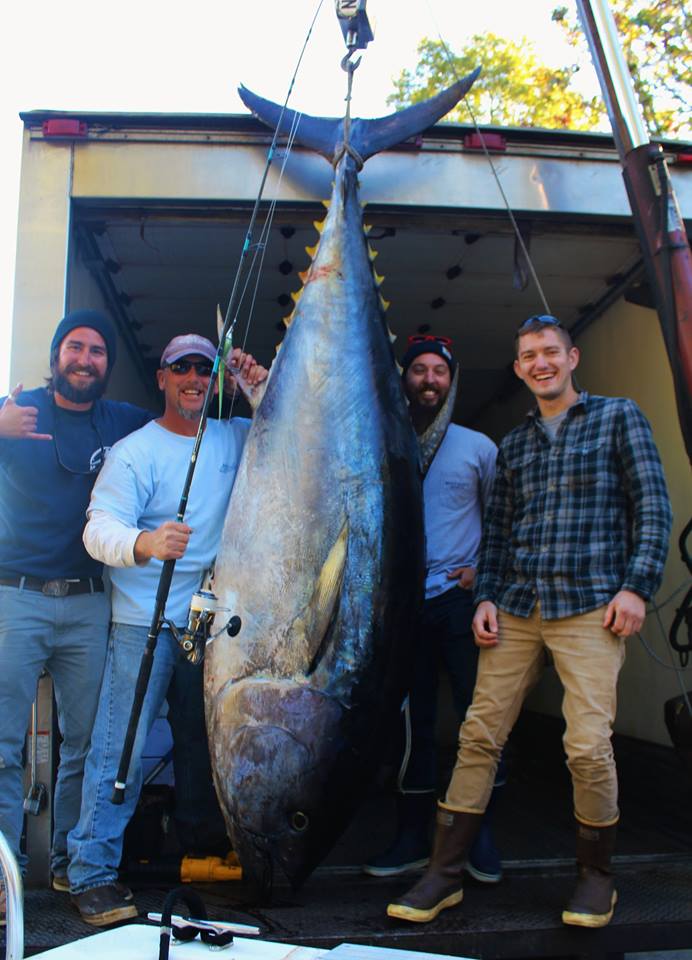 The bite here on Cape Cod is red hot for the light-tackle charter captains, and despite our gear and methods being met with skepticism, we continue to have more fun, and catch more fish, than most other boats who target the baddest fish that swims….the mighty bluefin tuna.

No one would have believed 10 years ago that catching the larger models on light gear was possible. As we advanced our skills, and the tackle industry advanced its spinning reels and rods at warp speed, we discovered that we could also target some of the bigger bluefin that swim in our waters with success. We use strictly artificial offerings — plastic, rubber, metal, and wood — delivered to the fish directly by the angler. To handle a 200-pound fish on spinning gear is world-class level, with very few catches of this size common save for a few elite anglers and captains. A 300-pound fish is undoubtedly a “real” fish by anyone’s standards, regardless of the gear. When you reach the high end of the 300-pound class, the numbers dwindle so dramatically that you could begin to name them and the fishery where it occurred… 400 is a benchmark very few have attained, anywhere in the world.

Two days ago, I watched one of my good friends, and fellow charter captain Bobby Rice from Reel Deal Fishing put a 423-pound fish on deck, with a crew of anglers without much experience on light-tackle bluefin, topping this captain’s largest ever. Launching out of the same ramp, working the same grounds, and helping one another out is how we operate each and every day. This puts more fish on deck for those in the network, while helping to highlight the bite for the entire industry; more fish being caught, more anglers looking to charter a boat to access the fishery. Right after Capt. Bobby and crew landed their fish, we joined in their celebration back at the dock while their fish was picked up, weighed, and photographed in all it’s glory. After everyone departed, both captains tended to their respective boats, then sat for a moment to reflect on not only the feat that was just accomplished, but what it did for our fishery…yet another monster bluefin on light gear! The 500-pound benchmark was hinted at, and we both agreed that given the right crew, the right fish, and a bit of luck maybe it was possible….

I had the right crew, we hooked the right fish, and everything came together including the luck. Despite the sloppy seas, my crew of three hardcore anglers, with plenty of fishing prowess between them but only a bit of bluefin experience and little on light tackle, were rigged and ready before sun-up. As we broke the inlet, we were greeted to a spectacular sunrise, with that perfect look to the water, and crisp, cold air, we had high hopes. As we stopped to snap a picture of the rising ball of fire, a familiar voice came on the radio.

“Dom, come find me now, almost same spot as yesterday, my machine is lit up with tuna, and we are TIGHT!!!”

Capt. Bobby had beat us out by a few miles and had dialed in the fish just a short distance from where they had been holding. As we raced to the spot, we watched them battle their fish but struggled to find the school of tuna they had gotten their bite from. With his second boat Reel Deal III out also on tuna, Capt. JR Barnes at the helm and on the radio worked with us as we moved near Bobby without getting in the way of their fight, and managed to mark a few fish on the sonar between us. Working in tandem is crucial to staying on these fish, and daily this teamwork is what gets things done. A few drifts produced nothing for us, so we pushed just a bit away from the building fleet, while the wind came on hard and the seas turned from sporty, to downright nautical, with tight 3- to 5-foot snappy waves and spray over the bow. A few solid marks showed directly under the boat, and with a quick reverse of the engines and turn to get the boat side-to in the wind, all three anglers dropped down — two RonZ lures and one Point Jude Deep Force jig — the go-to lures aboard my boat with big bluefin and a vertical bite. Two of the offerings were ignored, while the third was inhaled and began what was to become the single most intense hour of my professional career.

My anglers were rock stars, as soon as the fish was hooked, we instantly knew it was of size. As line melted off the spool at an alarming rate, we cleared everything off the rails and began chasing this demon…directly into the tide and wind, straight into the waves. The first 20 minutes were spent with heavy throttle, an angler pinned to the combing bolsters along the rail, reeling like mad as we tried to get enough line back on the spool to handle the next run, as the fish went east, west, then back to east, all at a distance of 3 to 4 football fields away from us anytime it switched direction. The line was stretched out a good 60 to 70 yards horizontal to the water before it even entered, indicating typical behavior of a really BIG fish.

Each time we caught up enough to get more than half the line back onto the spool, the fish would surge off in a different direction, as if it didn’t even feel the run before. All the while, we were trying to ward off other boats headed toward the direction the fish was running. Both JR and Bobby stopped what they were doing to run toward the other boats and yell to them to veer off. After 40 minutes of chase, we were finally able to come out of gear for a bit and get the fish to settle in, of course down on the bottom. After 15 minutes, we gradually increased the drag as each angler took a turn and passed off to stay fresh. As the fish began to tire a bit and pull less and less drag on its runs, suddenly the fish decided to come back to the surface, and began once again swimming into the waves and wind. All three anglers dug down deep, taking quick turns, and we began to creep up on the fish in gear, putting enough heat on it to prevent it from sounding, but not so much as to get it pissed off again and head for the bottom.

Knowing the only way we would be able to land this fish in the conditions we had was to get it near the surface, we were forced to drive up on it to try and take it with a dart shot from behind. One of the crew, Hans, had a bunch of boat experience and offered to drive the Dusky, while I climbed all the way out to the end of the pulpit in the bow, harpoon in hand and eyes on the distance between us and the impossibly large dark black shape swimming in the backs of the waves, as it slowly decreased. With perfect pressure on the line, and a perfect approach as I barked directional changes and speed, Hans maneuvered the bow within throwing distance, and without even a thought entering my mind or heed to the cold water swamping my feet and washing over the bow, the dart left my hand and thankfully was true to the mark…right into the dark black meat of it’s head, the instant reaction from the fish let me know it had sunk in good. The drag began once again screaming while the dart line dumped between my hands, and this fish once again put itself just abut on the bottom with another demon run. Just before the ball was about to come whistling out, she ran out of room with no more depth to sound to, and we began to slowly work her back up with both the rod and the hand line.

Tugging on what felt like a runaway bus, we finally worked the beast into sight, and the true dimensions of this animal became clearly evident to all on board….this was a true stud of a fish, a real giant by anyone’s definition. The next 20 minutes were spent getting a tail rope on (not an easy feat with an unhappy monster with two gaffs in its mouth and a dart in its head), a 2nd and a 3rd tail rope, and a flying gaff head attached to a line off the cleat to try to swim the fish to properly dispatch it and bleed it out….it got even angrier and completely straightened out the 8-inch, heavy-duty gaff, almost escaping again when the cleat almost fully dislodged from the side of the boat. Finally, the deal was sealed, and the prize was ours. We could not get this fish into the boat in the heavy seas, so we were forced to tow it back to the near shore waters that were a bit calmer, where we slid it onto the bracket, and raced back to the dock to get a good look at the fish under calmer conditions.

The tape on board went to 96 inches — it wasn’t long enough to get to the tail. Upon getting it out of the boat and finally stretched out to its proper length, a new tape was employed and stopped at 101-inch fork length, topping the scales at an official 597 pounds bled….no question over the 600-pound mark when it was swimming. This fish set another bar for the light-tackle crowd to shoot for, just days after it had been pushed a bit further.

It also solidified Cape Cod as the single best place on Earth to target fish of this magnitude on truly light tackle.

Setup used to land this fish: 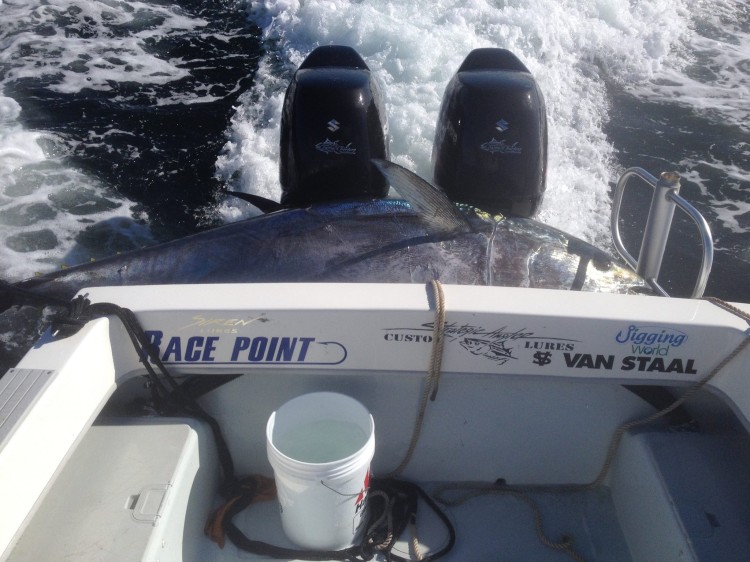