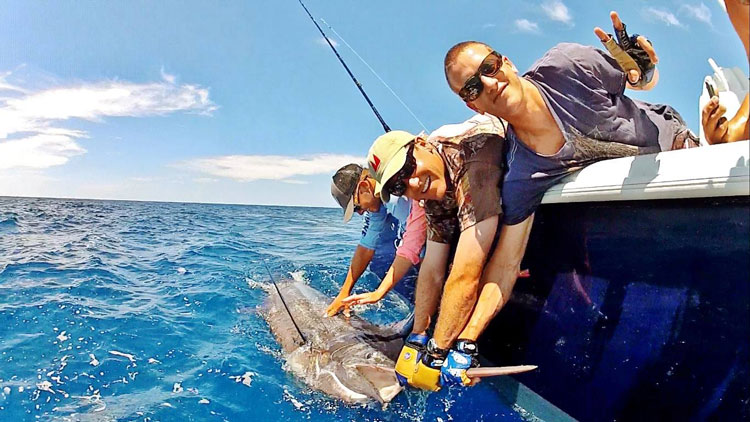 Ever consider going for a swim while fishing 100 miles out in the canyons? It’s usually not recommended for obvious reasons, but a 135-inch blue marlin held boat side might stretch your comfort zone. This weekend one Edgartown native rose to the occasion and went for a swim with a twelve foot leviathan.

A dying north wind and calming seas after Hurricane Arthur gave us another window for a run to the northeast canyons. At the dock in Edgartown harbor, our crew of five prepared for our journey to Veatch canyon. Once geared up and iced down RAPTOR, the Yellowfin 36, was ready for action and we pushed off the dock headed for the edge of the continental shelf. No winds and not a wave to be found once south of the island. Near perfect conditions for RAPTOR which made the 100 mile voyage cruising around forty four knots. Fast run, even for us.

We arrived at the tip of Veatch canyon around 5:30 pm. Outriggers out, lines in. Spreader bars and artificial lures went in the water first, then we rigged ballyhoo with skirted and naked variations added to the mix. Not long after lines in a pair of mahi attacked while trolling south. One gave a nice aerial show before spitting the hook and the second was pulled boat side to the gaff, fish on the deck.

We got a few more mahi then doubled up with one mahi and one skipjack tuna. Seeing the tuna was a welcome surprise so we circled back and came tight to another mahi and a small yellowfin. The tuna got everyone pumped up, especially the female angler on board who had just strapped up and battled her first yellowfin. Awesome stuff! 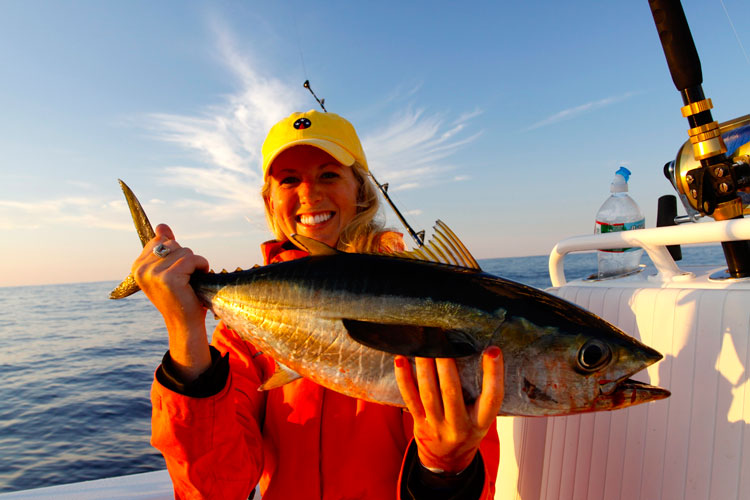 Once it started getting dark, we powered down for our first drift of the night. The underwater lights lit up a sixty foot radius and the glassy conditions and made for crystal clear viewing down into the water. A few schools of squid darted through the lights deep down, well out of dip net range. Just as the first few people laid down to recharge, the tuna rod doubled over and started taking line for a short run. A few minutes later, our second yellowfin was pulled up into the underwater lights and then into the boat. Always cool to go from absolute calm drifting along in the dark to tight lines and screaming drags.

After repositioning, we saw a few marks on the screen so I sent down a jig and jigged up a small yellowfin. Nothing like the sound of the Stella reel drag to wake everyone up. A small group of flying fish came into the underwater lights to investigate and after some fine dip netting we were bridling one with a hook and sending him down on a tuna rod. Beautiful little fish and the first one any of us have ever captured. We got another small yellowfin on the jig a few hours later that was released to fight another day. Tuna on a spinning rod! 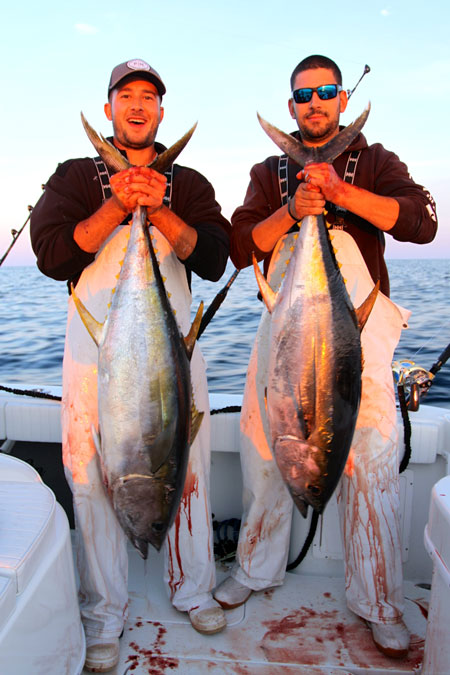 Things started to lighten up around 4:30am so we went back on the troll. We had just three lines in when we saw three big splashes and the reels started peeling off line again. One immediately dropped the hook but the other two were solid hookups. Two nice yellowfin in the fifty to sixty pound range cleaned and into the ice box. Once back on the troll, we started catching a steady pick of small yellowfin with a couple bigger ones mixed in. Everyone fell into the cycle: attacked by yellowfin, put out lines, rig ballyhoo then get attacked and so on for the next few hours.

With a small craft warning forecasted for later in the day we decided to begin trolling north around 10:15am. All of a sudden the 80W in the center position bent over and started dumping line. We all knew right away this rod had the big marlin lure. In a few seconds, the 150 yards of top shot was gone so we began pulling the other lines in. The belt was then fastened for a standup fight. The commotion in the boat was interrupted when a massive blue marlin started grey hounding completely out of the water about two hundred yards off to starboard. An absolutely incredible sight. 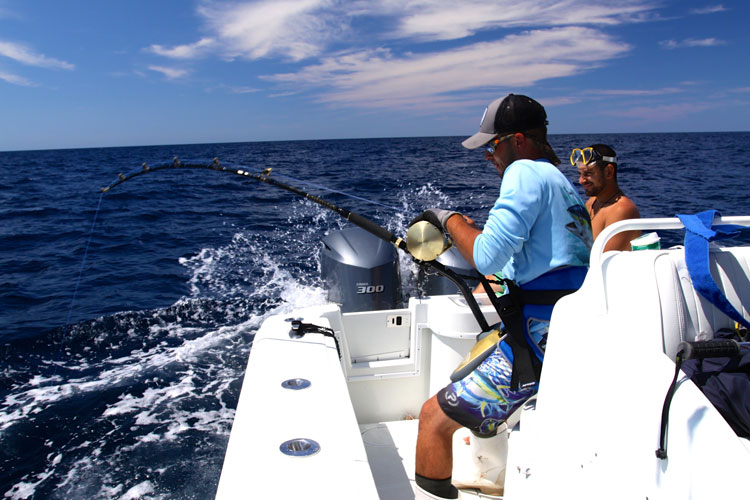 When it stopped jumping, the marlin took off away from the boat and accelerated. The line spinning off the 80W was so fast it burned the angler before we could get a glove on him. We started backing down as there was about half the line left on the reel. When we got up to speed a few minutes later, another several hundred yards had peeled off. The line kept clicking off the reel slowly for another few minutes until it finally stopped. At this point we were moving along well in reverse, not sure of the speed but it was flat calm so no waves coming in. We soon realized we couldn’t keep line from slowly coming off the reel unless we were in full reverse so we made the call to push the drag up past strike, a first for us on an 80W. 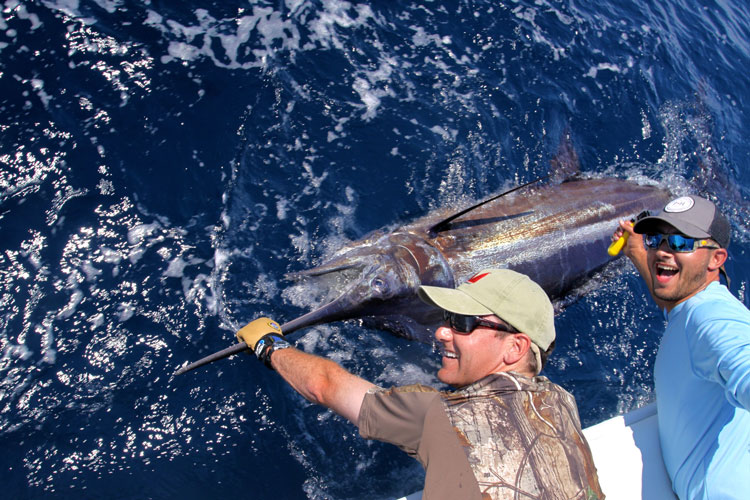 We knew we didn’t have all day with this fish because of the impending small-craft advisory. It was a stalemate. About one hour after hookup, the drag was now pushed all the way up to full. After twenty minutes or so of staying straight up and down, the rod tip started coming up slowly and began lifting it inch by inch. The first time we grabbed the leader, it took off on a short run, just too powerful to hold on. The next try worked out better and we pulled up the last few feet to the surface. Lots of pressure on the line leadering, both hands pulling full force. Once we got hands on the bill, the fish began thrashing and rag-dolled us for a while before it began to calm down. We got the hook out for a clean release and began swimming it boat side to rest and revive. We measured length and girth and did all the filming we could while reviving the fish, including going for a swim that one crew member will never forget. 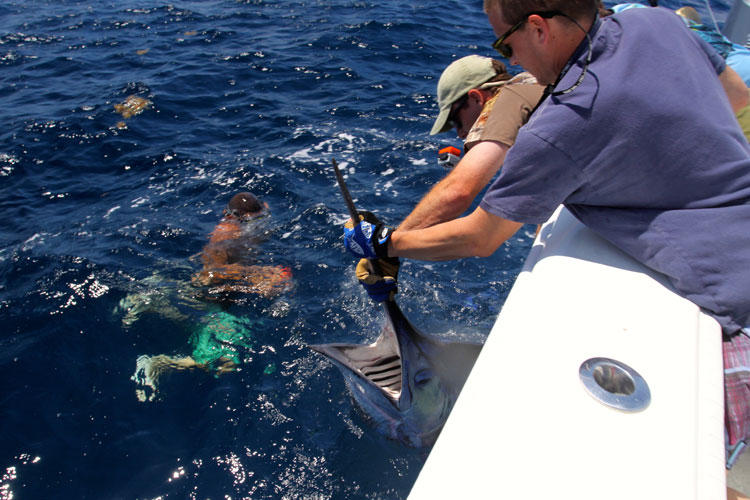 A smooth and steady ride home put us back at the dock in Edgartown at 3:00pm. Everything washed and put away, ready for the next run.

Thank you to everyone who makes this possible. A trip none of us will soon forget.