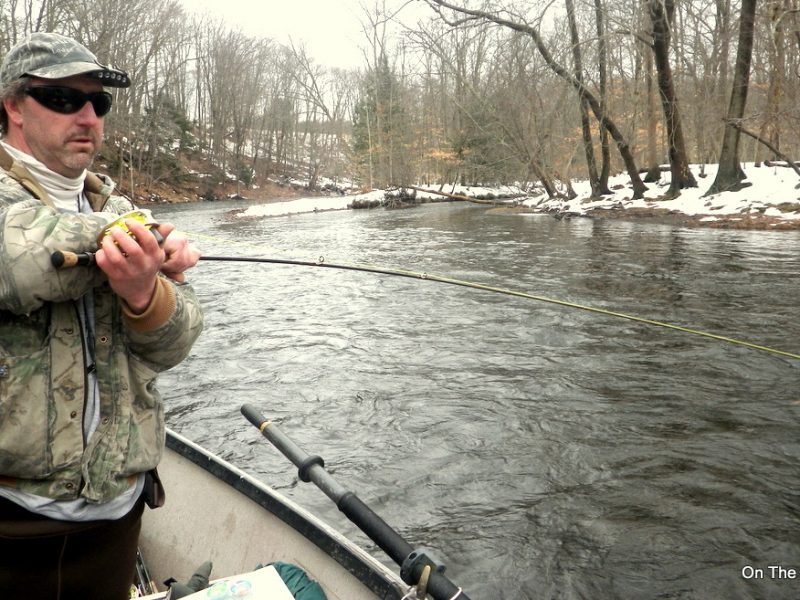 The recent mild weather came as a pleasant surprise to anglers throughout the Northeast. With 50- and 60-degree temperatures forecasted, I wanted to take advantage by sneaking in some mid-winter steelheading on the Salmon River.

I’ve never made a trip to the Salmon River in January or February, less because of the fishing itself (which stays good through the coldest weather) and more because of the road conditions. The trip to Pulaski is 5-and-a-half hours from Cape Cod, and snow or ice would only extend an already punishing ride.  In the past, the nice weekends never lined up with the weekends I didn’t have a Sportsman Show to work.

I left my house at 1:45 a.m., and was lacing up my wading boots by 7:30. There were already fishermen hooking up to thrashing steelhead, and I rigged up as quickly as I could, and found a spot.

There were plenty of anglers out taking advantage of the mild weather, but the fish were plentiful and willing to bite. This was probably helped along by the rising water level from the rapidly melting snow. My first hit came about 30 minutes in. My indicator disappeared and when I set to hook, it reappeared several yards upstream, fast to a cartwheeling chromer. The fish changed direction and spit the hook. 0/1. From there, the bites came frequently. Most were lost but a few were landed. There was the standard “one that got away,” a steelhead with a tail like a 20-pound striper. The fish slowed down just long enough to make me think I had a chance.

The next day, I ran into my friend Scott Glazier from Tinker Tavern Lodge and Guide Service. He’d just launched his boat only to have his clients call and cancel. He invited me to fish with him for the day, and after shuttling his truck and trailer to the lower launch, we were on our way. Scott knows the river inside and out, pointing out productive holes and seams as we moved downriver. Being on the water most days gives Scott a pretty good idea of where the steelhead are hanging. The goal was finding some fresh fish in fast water. The fish I’d targeted the day before were hunkered down in deeper holes, where they’ll most likely spend the winter.

We made 5 stops and hooked fish at all of them. Each steelhead was bright and fought like the devil himself. As always, more were lost than landed, but if you can stay connected to a steelhead for a long run and a couple jumps, it’s almost as good as landing him. Almost.