Block Island earned its reputation as a legendary striper-fishing destination many years ago. These days, her waters draw numerous charter boats and recreational fishermen, who troll, jig and drift for stripers. At the height of the season, it’s not unusual to see a hundred boats working the waters near Southwest Ledge at one time. Once the sun goes down, however, most of the boats head back to port. And under the cover of darkness, some truly huge stripers move in to feed around the rocky shores and beaches of the Block.

My favorite time to fish Block Island is in the dark of night, and I’ll spend approximately 70 nights each season out there with my fishing partner, Peter Vican. As Peter jokingly puts it, he doesn’t want to go home to his wife and I have no life – so we go fishing. The truth is we share a passion for striper fishing and get out every opportunity we have.

Our trips have yielded plenty of large bass. For us, a good night of fishing is one where we catch and release a few dozen bass, 20 pounds or heavier. Along with the huge numbers of 20-pound-plus bass, we’ve also found a few monsters. The biggest one we’ve landed was caught in July a few years ago, when Peter bested a 76-pound, 14-ounce striper – the largest striper on record caught by rod and reel from a boat, and a Rhode Island State record.

If you’ve never fished Block Island at all, I’d strongly recommend that you try fishing during the day first, to get the feel of the area and learn the spots, before you head out for night fishing.

Don’t be deceived by the weather reports for Block Island because they are notoriously unreliable. We always joke that a good rule to follow is that if the NOAA reports the wind at 5 to 15 MPH, you can add those two numbers together to get more likely conditions. Neither the wind speed nor the direction in the forecasts are entirely reliable.

Don’t ignore the forecast, however, and pay attention to forecasted wave heights and frequency. Waves at a height of three to four feet with a frequency of eight seconds or less can toss a boat and make fishing very unpleasant, if not impossible. However, the same wave height at a frequency of 30 seconds is something you won’t even notice and will seem like a very slight roll when you’re drifting.

You should be aware of the current direction around the island. It varies greatly with location, and this will have an impact on your drift. If you’re not aware of it, it can be a little confusing. The chart in Figure 1 shows the current direction for various locations around the island based on absolute north. This information is part of the tide charts available at the NOAA website: http://tidesandcurrents.noaa.gov.

Almost all striper fishermen have a preferred set of conditions for fishing Block Island. They’ll factor in moon phase, wind direction and water conditions. Depending on who you talk to, you will hear all different advice such as: fish only on an outgoing tide; bioluminescence in the water spooks the bass; don’t fish on a full moon; always fish on a new moon; and never, ever fish on your wedding anniversary. While some of these things may be true for fishing from shore or in specific inshore locations, the rules don’t always hold true in boating situations around the block. I can tell you from experience that no matter what the conditions are, as long as there is bait around the island, the stripers will be there. It’s just a matter of finding them.

We’ve fished Block Island in virtually every weather condition and moon phase, and it’s made little difference. What does happen during a full or new moon is that the current runs stronger, and you might have to compensate for it with more weight on your line or by using your motor to “power drift” and slow down the drift speed, but even on weaker tides, the fish will still be feeding.

The best night of fishing we ever had at the island occurred on an August night. We were fishing off Black Rock in 20 feet of water. The water was very clean and clear, and there was so much bioluminescence in the water that we could see a silver streak behind the eel as it swam to the bottom. Then there would be a big swirl of silver as the bass hit the eel and we could follow the trail of light as the bass swam off. When we brought a bass to the boat there would be two or three other bass swimming with it, and when they saw the boat they darted off in different directions, leaving a bright luminous trail behind them. We’d unhook the bass and watch the light show in the water as the bass swam down. Then we repeated the scene all over again with another eel.

Finding the Next Record-Breaker

Finding big bass around Block Island at night usually isn’t too hard. If the wind is blowing hard, it may make it difficult to fish the windward side of the island. All you need to do is head to the leeward side of the island and fish there in comfort. There’s bass all around the island. Fishing structure is what’s most important. Fish the rock piles, and when you move within an area, move along the contour lines that define the shape of the bottom – that’s what the fish do.

During the day bass are on the move, looking for food and chasing bait. They can found throughout the water column. At night the bass gather around rocky structures and mussel beds where they can prowl for food and ambush baitfish. After dark big bass become bold and will move into the shallows or onto the top of humps and ledges.

Look for current lines, or rips. Rips often form where the current meets an abrupt change in bottom contour. The moving water will push bait along the structure, and so the bass will also be there.

Put in waypoints when you find fish, and note the difference between an incoming and outgoing tide for the point. That will help you to learn which side of the structure the fish are on for each tide condition.

One of the most popular areas to fish, during both the day and the night, is the Southwest Ledge. Some of the ledge lies in federal waters, known as the EEZ, outside the 3-mile limit of state waters. It is illegal to fish for striped bass in the EEZ. You can, however, transport bass through the EEZ providing you don’t stop to fish and the bass are of legal size and meet possession limits. How will the Coast Guard know if you stop in the EEZ? They have really great radar and their regulations are strictly enforced by patrolling boats.

The best way to fish the island at night is to use live eels or chunked bait. Trolling at night at the island is possible, but it’s not something I’d recommend. The bottom structure and the number of lobster pots make it impractical. Our preferred method of fishing is to use live eels rigged to Gamakatsu 6/0 Octopus circle hooks on a 48-inch, 50-pound-test fluorocarbon leader. We use fluorocarbon leaders because the material is highly abrasion resistant, so it stands up well to rocky structure and lobster pot lines. Of course that doesn’t mean squat when the bluefish move in and cut off your rig with one swift bite of their razor-sharp teeth. At night, monofilament, fluorocarbon or wire leaders will probably work equally well. The bass won’t shy away from the wire leaders at night, and the wire will keep you from being cut off by bluefish.

When fishing in depths less than 30 feet, we don’t use sinkers unless the current is running really strong. In water deeper than 30 feet, we normally use 2-ounce egg sinkers. Adjust your sinker weight to the strength of the current. We have used egg sinkers up to 6 ounces to keep an eel down at the bottom in a strong current. It just takes a little experience to find out what it is needed to get your bait at the optimum depth.

That about covers the basics and will get you into the big bass bite around Block Island. We fish on a boat named The Happy Executive. Give us a call if you’re out there some night and let us know how you’re doing. 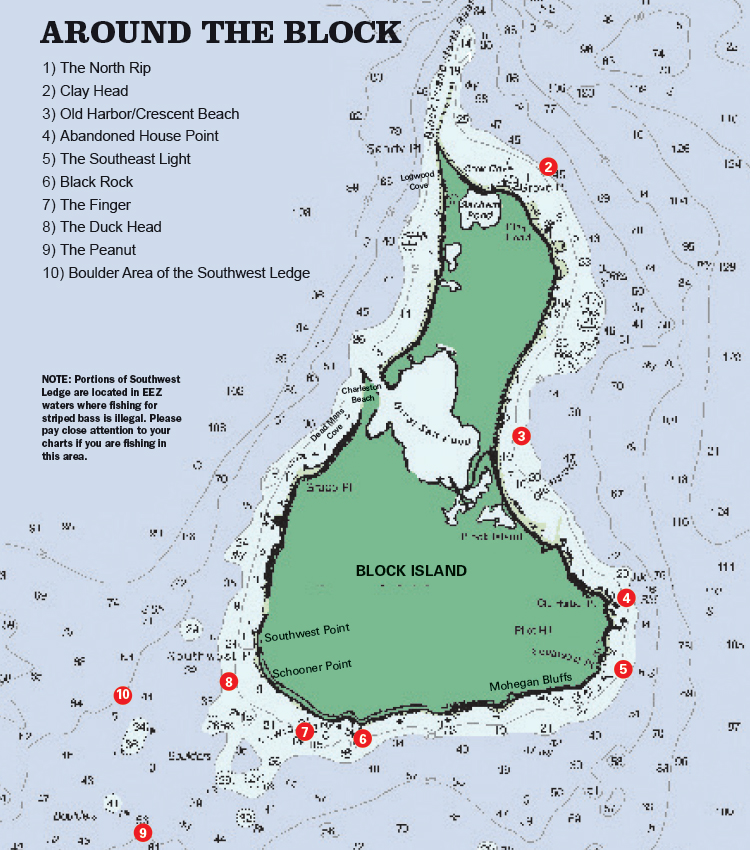 These well-known spots are easy to find, produce fish, and most of them can be fished both day and night.

1) The North Rip
The rip is an area where stripers feed day and night all season long. The area also has plenty of bluefish and dogfish. It is probably the only area that can be trolled at night.

2) Clay Head
This is a good springtime fishing area that produces well during the day. Tide doesn’t matter much because the bass will be chasing bait in the area. There are a number of rock piles throughout the area that will hold stripers.

3) Old Harbor/Crescent Beach
Find the rock piles along the beach and work them to find bass. At night, fish in close to the shore.

4) Abandoned House Point
Look for the boarded-up house on top of the hill, and fish the rocky area that extends outward from the shore. Work the entire structure for best results.

5) The Southeast Light
This is a storied area favored by a number of very successful charter captains. At night and early in the morning, work the 18- to 20-foot contour. During the day, move to deeper water, fish will sometimes be holding in more than 50 feet of water during the day. Search for rock piles in the area that will hold fish. The area is also known for an abundance of bluefish and dogfish.

6) Black Rock
Fish the deeper area between the buoy and rock piles at dusk and move into the shallow indentation formed by the contour at night. Some boats will anchor at the rock itself during the day and chum for bass. While the rock itself is submerged, waves breaking over the top provide a very visible warning.

7) The Finger
Named for the shape of the contour on the map that looks like a hitchhiking thumb, the Finger is an excellent spot to fish at first and dusk. Bass will move in and out of the area along the contour edge.

8) The Duck Head
This is another spot named by the locals for the shape of the contour on the bathymetry map. This spot is a better daytime fishing spot and produces best on an outgoing tide. Try fishing this area about two hours after the turn of the tide.

9) The Peanut
The Peanut is another area named after the shape of the contour. Drift across the top of the Peanut’s rocky structure at night. This is an excellent night-fishing spot.

10) Boulder Area of the Southwest Ledge
The area marked “Blds” on maps of Southwest Ledge fishes well both day and night. Note that it is close to the 3-mile limit, and that you can’t fish for stripers beyond that because you’ll be in the EEZ (Federal waters) where striper fishing is prohibited.