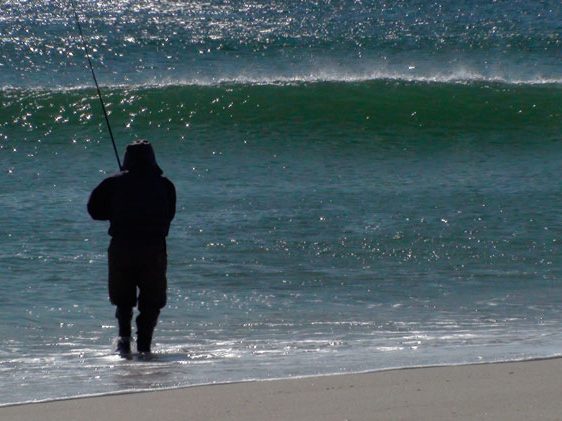 You never know what you are going to find until you crest the dune above the car park.

The forecast said the swell on the ocean side would be 2 to 4 feet and the wind 5 mph, suggesting that my foray with a new fly rod would be possible, but often either the wind moves round or the swell is at the top end of 2 to 4. Occasionally, the sea turns slimy brown with mung, the horror weed that is the curse of surfers, swimmers, and fishermen alike.

I peered over the edge of the dune and saw flat, crystal-clear blue water stretching along beach for miles in either direction, so I walked back to the car to get my kit. There had been a lot of mackerel working huge bait balls of peanut bunker along the edge of the surf, so my plan was to start with these and then move on to striped bass once it began to get dark. I pulled out my fly rod , carefully threading the floating line up its length and tying on a 9-foot 18-5 pound tapered leader. It’s not that the mackerel are fussy, but the tapered leader would help turn over the slightly bulky fry pattern I was planning to use. I threw some pliers, a head torch, various spools of leader, a couple of fly boxes and a rope into my rucksack and set off back to the beach, leaving a note for my friend Andrew who was joining me later, on the windscreen of my car: “Heading North.”

The area immediately in front of the car park is often crowded even just before dark. Beach barbeque permits had been issued as the light wind meant there was little danger of burning down the dune grass and neighbouring tinder-dry woodland. Harassed parents dragged sacks of firewood, buckets of kindling, coolers of hot dogs and contraband liquor, deck chairs, and tables across the sand, wondering how close they can decamp from the car, whilst the kids drag them as close to the sea as possible.

I set off left. The structure farther up the beach is much better. A series of long sand bars and sand bays create a mass of holes and gullies for feeding fish to lie in ambush, away from the screaming masses and, later, the flickering light from firepits.

I walked on for about 100 meters, the high tide pushing me into the softest sand and making the going hard. Ahead another 200 yards, I saw what I was looking for, birds gingerly picking baitfish off the surface of the water. I picked up my pace, scanning the surface for signs of fish working beneath them. Sure enough, I found what I was looking for. Mackerel, huge numbers of them, harassing peanut bunker, which, having been pushed to the very edge of the sea, are either falling victim to the hunters or being thrown up on the sand by the surf.

I flicked the fly out into the massive school of feasting fish, immediately hooking up and bringing an 8-inch handful of iridescent green to hand. Several more followed suit, and I couldn’t help but wonder if I could catch one on a dry fly. Rummaging around in my rucksack, I pulled out the blue fly box, which has an eclectic mix of smallmouth bass flies, huge bombers I throw at salmon up on the crystal-clear waters of New Brunswick, and a few trout dries that I use on the Cape’s kettle ponds. I tried the bomber first, and it was harassed all the way back to shore but was too big for the tinker mackerel. I tried a big, leggy popper that I’ve used with great effect on smallmouth bass, and again the mackerel chase it but I cannot get one to stick. My last dry in the box is a big Green Drake mayfly. I am not even sure why it is there, but I decide to give it a whirl. I flicked it out, twitched it, and bang – fish on.

I played this game for another 10 minutes and hooked the better part of 20 fish. Marvellous, how many people have caught a mackerel on a mayfly?

As the sun began to set, the mackerel began to disappear. I continued to walk up the beach, casting to the occasional school of fish still feeding along the edge of the surf. I hooked one more fish, and it cartwheeled out of the water. As I guided it toward the beach, it took off again, and I saw the unmistakable dorsal fin of a big bass break the surface beside it. It grabbed the baitfish by the head, dislodging the fly and impaling itself on the outside of its cheek.

The bass, now hooked, took off into deeper water, trying to hold the other side of the breaking waves. It was a powerful fish, at least 36 inches from what I saw of it, and it ran parallel to the beach for 60 yards as I ran to keep up with it. Each time I muscled it back into the surf, it pulled away again, stripping yards of line off the reel. While the reel was designed to hold permit, my desire to fish light for the mackerel was now causing me a problem.

Suddenly the bass erupted from the water, and a large black shadow stormed into shallows where I was playing the fish. The fish tried to get past the seal, but was no match for 600 pounds of streamlined blubber. Rather triumphantly, the massive gray seal surfaced with the bass clamped between its teeth and proceeded to devour it right before my eyes.

I saw that the fly was no longer in the mouth of the bass, but was now impaled in the back of the seal’s flipper. Not wanting to leave the fly embedded in the seal, I slowly applied pressure to the rod, hoping that the fly would gently pull out. Just then, something caught my eye behind the seal. It was just a brief change of water color, but it was definitely something.

If you have never witnessed a great white shark hitting its prey, you will not understand the sheer ferocity nor the speed with which it happens. The seal, however, was no slouch, and at the last moment rolled off to its left and dove. The shark missed, and at the same instant, the fly pulled from the seal’s flipper and pinged back toward me – but not before embedding itself in the upper lip of the shark. The big fish, having overshot the seal substantially, slid up the beach and came to a grinding halt.

It was at that exact moment my friend arrived at my shoulder.  I handed him my pliers and asked if he would mind removing the fly and putting the fish back while I looked for another Green Drake for him to try.