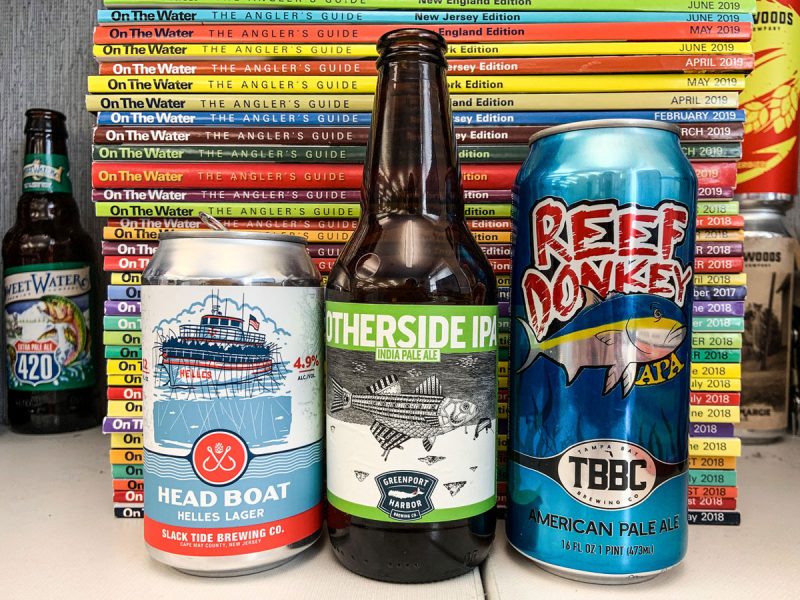 First off, I want to apologize to all of our OTW Fish Beer enthusiasts. Things have been busy here at OTW headquarters, and we’ve been falling way behind on our weekly Fish Beer Friday reviews. It’s not that we haven’t been diligently judging new brews, we just haven’t gotten around to writing the reviews.

To make up for it, this week we will enlighten you with not one, not two, but three new Fish Beer reviews. Cheers! 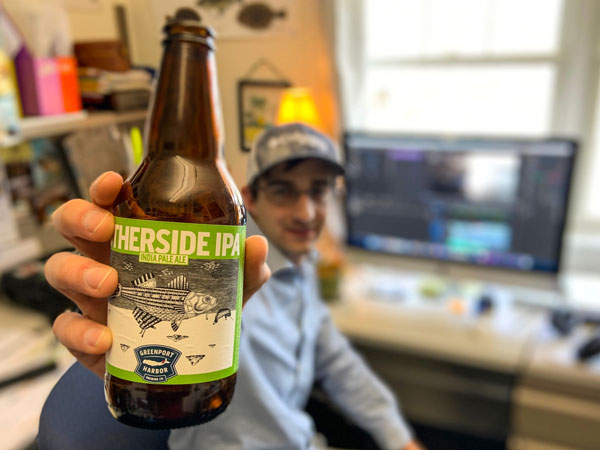 I am always excited when someone gifts me a beer, but when that beer has a fish on the label, I become ecstatic.

A few weeks ago my friend Jimmy Fee returned from a trip to Long Island with a 6-pack of Otherside IPA. I was giddy with delight. This beer not only features a fish on the label, but that fish is our beloved striped bass; the first beer we’ve found with a striper on it.

Let’s start with the label. At first glance, it appears to be a pen and ink rendition of a striper. But upon further investigation, the artwork is much more complex. If you flip the bottle upside down, the steam-punk-inspired fish turns in to a submarine… What the heck? I’m not sure exactly what’s going on here, but it’s definitely art. 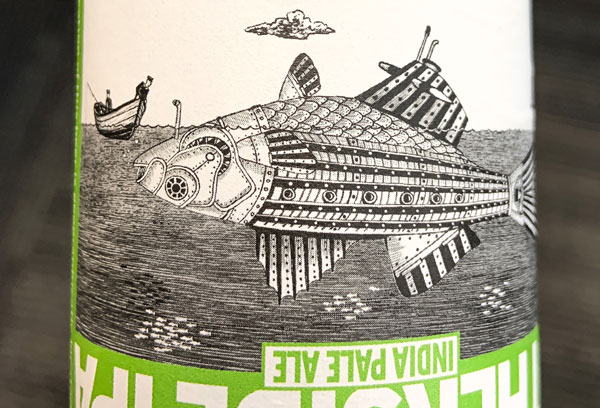 Anyways, this is indeed a superior brew. Our tasters found it smooth and refreshing. It has a glazed-over pale orange color with a thick foamy white head that slides off at a moderate pace. The aroma had a pleasant sweet evergreen hop contour, very fresh and clean with a nice sturdy clean cracker-esque malt bill coming about.

The flavor was earthy for a moment, then floral notes get added in with a hint of caramel in the background. The finish is mildly and pleasantly bitter.

The carbonation was spot on, and the ABV felt appropriate. The finish had just a hint of stickiness, acceptable, but not burdensome.

Overall, this beer is a fine, and very drinkable, IPA.

COMMENTS:
“What the heck? Is that a dead striper on the label?”
“Makes me want to go to the otherside where the beer is delicious.”
“I’ll arm-wrestle you for that last beer.” 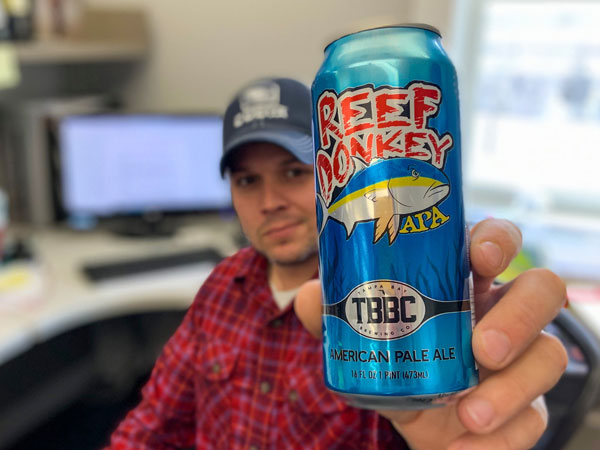 The term “reef donkey” is the nickname for amberjack, which are one of the hardest-fighting fish in the sea. I caught one, many years ago, in North Carolina. It demolished a topwater plug that was worked over a reef in 200 feet of water. The initial hit, and the first screaming run it made, was unforgeable. I wish I could say the same about this beer.

This brew has a nice, almost electric, honey-orange color. It pours with a luxurious head. The flavor is strong, not overly hoppy, but there was nothing distinct or outstanding about the taste.

This beer would have scored much higher if it weren’t for the strong, doughy aroma that emanated from the can. One taster described the smell as a cross between a barnyard and dirty socks. The taste, and the smell, did improve after several sips, but the initial swig was off-putting.

COMMENTS:
“Smells funky.”
“I don’t like the idea of anything with a donkey on it.”
“It gets better the more you drink it.” 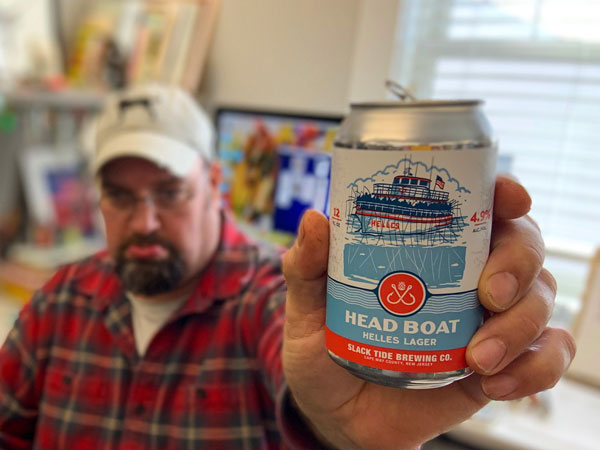 Unfortunately, as of this writing, this beer is only available in southern New Jersey. So we reached out to them to see if they’d ship us a 6-pack to review. But it turns out shipping beer is illegal. Who knew?

The fine folks at Slack Tide Brewing Co. did agree to at least send us an empty can, which is now proudly on display in the Fish-Beer Can Museum here at OTW headquarters.

Since all I have is an empty can, I will judge this beer by it’s label.

Depicted, in a simple and elegant three-color print, is the image of a party boat so stuffed with anglers it resembles a porcupine. It conjures up notions of clam juice, day-drinking, yammering know-it alls, and tangles so fierce they must be cut and re-tied. (Man I love partyboats!) 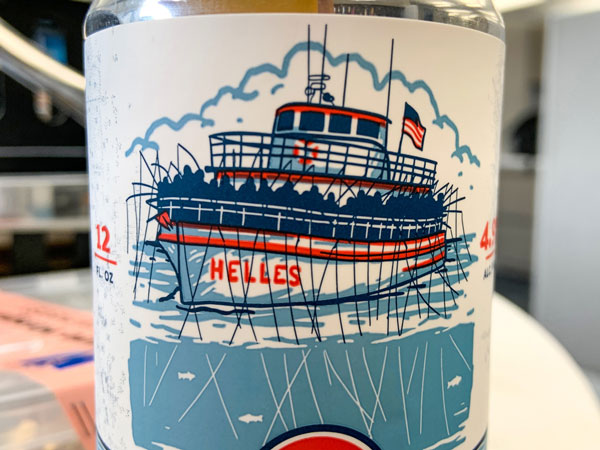 As a graphic designer, I must acknowledge that this is a seriously solid design. Hats off to whoever created it. It is sophisticated, refined and the font choices are spot on.

I did manage to find a single review of this beer online at BeerAdvocate.com. A member who goes by the screen name of HairyBeerGut69 had this to say about it:

“Poured from undated, but fresh, can into a pint glass. It pours a slightly hazy, honey-gold color with a half finger of fluffy, snow-white head and lots of soapy lacing. On the nose there is abundant brown bread and grains, along with a notes of caramel and spice. It open with a dose of caramel followed by crusty brown bread, parched grain, and spices. It finishes crisp and clean with a slight hoppy bitterness. The mouth feel is really pleasant: medium in body with lively carbonation, and at only 4.9% ABV it’s perfect for any hot weather activity. Overall, Head Boat is an excellent rendition of the style and the product of a fine brewery that continues to impress.”