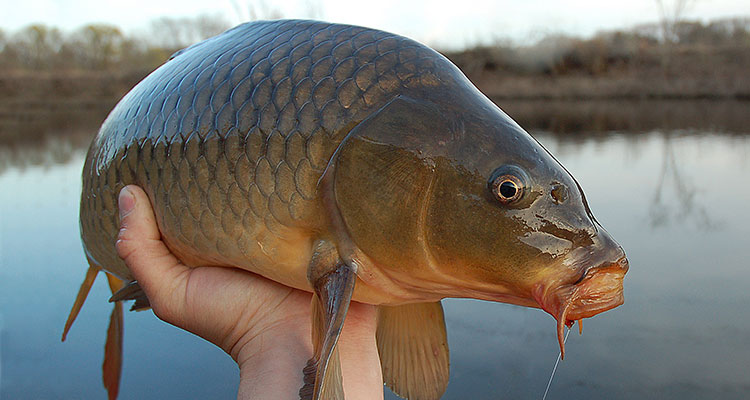 It was still pretty chilly on an early spring morning last year when I decided a change of venue was needed. The yearling rainbow and two-year-old brown trout in my local honey hole had been agreeable over the previous few weeks, but I wanted something more. I was looking for a battle royale, and only Long Island’s largest freshwater fish could provide my fix.

Pushing my kayak off from the shore of the Peconic River, I cut across the calm surface toward a small flat that encircled a subtle point. Here, I figured, the water might be a couple degrees warmer than out in the main channel. After quietly anchoring slightly up-current, I seeded the bottom with a few handfuls of canned corn kernels and sent a cast toward the transition zone where the shallows began to fade into deeper water.

It didn’t take long to get a reaction. Within ten minutes, the line came tight on my 12-pound-test spinning outfit and the battle was under way. My adversary, a 25-pound common carp, would prove more than worthy of pursuit. The big fish quickly powered down-river, pushing a wake that rolled all the way to the shore. Failing to pull free, she circled out to deeper water, spinning my kayak in the process and pulling 40 feet of drag from my reel. Rolling on the surface at the far end of her arc, she offered a momentary glimpse of bright orange color, then doubled back under my ‘yak before finally coming alongside. After a few minutes of revival and an appreciative release, she seemed no worse for the wear while easing away, and I couldn’t help but wonder if I had caught her before, or might catch her again sometime in the future.

I love carp fishing—especially in the early spring before seasonal weed growth explodes on Long Island freshwaters. While these huge scavengers get a bad rap because they occasionally muddy the water while feeding and can overrun a lake where predator/prey ratios are out of sync, they also provide super sport in low-oxygen waters where other fish find it difficult to thrive. Carp grow to huge proportions when their population is kept in balance by natural predators.

One of the largest members of the minnow family, Long Island carp can reach three feet in length, top 30 pounds and put up a brutish fight on medium-weight spinning gear. They are slightly line shy, quite noise shy and much smarter than their “big and dumb” stereotype. In fact, I find them generally agreeable, sufficiently challenging and exceptionally powerful.

Long Island has no shortage of carp waters. These golden submarines thrive in rivers, lakes and ponds from Brooklyn and Queens all the way out to Fort Pond in Montauk. Some waters, especially those with large concentrations of the huge minnows, produce fast action with small- to medium-sized fish in the 2- to 6-pound class. Other waters—where the population is more balanced—have a range of sizes, with typical carp averaging 8 to 12 pounds, with a few 20-pounders in the mix. On Long Island’s larger waters, and those locations where carp are present but not overly abundant, teen-sized fish are caught frequently and some truly big bruisers can put both your tackle and skills to the test. My largest carp in local waters came from a mid-Island lake and tipped the scales at 32 pounds. I have seen even bigger fish in our waters, including one monster in a relatively small South Fork pond that appeared to weigh 40 pounds or more. I baited that fish three days in a row but couldn’t get it to take, and after the third day, I never saw it again. The International Game Fish Association lists a 75-pound brute taken in France as the current world record, but specimens weighing more than 100 pounds have been caught.

Feeding carp scour the bottom like catfish in search of relatively small tidbits on which to feed. Roving in packs like a fleet of battleships, they’ll methodically patrol a small area before moving on, eventually vacuuming almost every inch of the bottom in a grid-like pattern while sucking up small invertebrates, worms, algae and other soft fodder from the muck. Unknown to most anglers, carp have a set of molars deep in their throats, similar to the crushers of a blackfish. With these, carp can pulverize the shells of small snails, freshwater mussels, crayfish and other hard-shelled creatures that few would imagine as carp food.

Although the omnivorous carp has a widely varied diet, serious anglers present bread balls, corn kernels or prepared dough mixtures called “boilies” to tempt these thick-scaled monsters. The boilies, favored by European carp anglers, are made from a base of corn meal or flour, flavored with vanilla extract, garlic, rum or almond extract. The mixture is cooked until it takes on a delightfully pungent scent and is sticky like a store-bought roll of biscuit dough.

Most local anglers, however, opt for simple bread balls or corn kernel baits. Bread balls are nothing more than a piece of white or wheat bread (or a roll of pop-up biscuit dough) rolled into a tight ball ranging in size from a quarter to a half-dollar coin. You can slide this onto a size 1 or 2 beak-style bait-holder hook so the gap and shank are fully covered but the barb and point are slightly exposed. If using corn kernels, simply slide several over the point and up the shaft of the hook until all but the point and barb are covered.

Most of the time, you’ll fish blind for carp, casting to spots where you’ve caught or seen fish before, especially in shallow lakes and ponds. Some days, however, carp will tip off their presence near shore or on the flats by breaking the surface with their backs and tails as they tip downward to root around in the weeds. Watch the tail breaks carefully to determine which direction the fish are moving and then drop a cast 10 to 15 yards ahead of the pack.

There are days when carp could not care less if you make your presence known, but fish them on a regular basis from the same spot and they’ll figure things out pretty quickly. Therefore, I like to attack from slightly different vantage points on the same water when I fish an area on back-to-back days or more than twice in a week. Even just casting from the next opening down the bank or anchoring my kayak so that I can work the same area from a different angle seems to make a positive difference. I also like to speak softly when pursuing these fish. Most of the time, a little chatter with a fishing partner does little to deter their feeding routine, but when under pressure or feeding in shallow waters, these fish can be as shy as lunker trout or bass.

There are a ton of specialized rigs designed for carp fishing, but I like to keep things simple. Start with a sturdy, 12- to 15-pound spinning setup and tie the hook directly to the main line without a leader, snap, swivel or added weight. This will allow corn kernel or bread ball baits to gently sink on their own and, hopefully, settle atop the weed roots where they will be easy for the carp to find.

It should come as no surprise that you’ll want to carry a big stick when targeting potential beasts but don’t take this to extremes. I’ve seen anglers using South Shore surf rods to battle carp. You’ll win every fight with such a heavy rod, but it certainly takes the sport out of the game. While you’ll occasionally need to turn these fish away from docks and snags or haul them through thick weed beds, even a heavy freshwater bass rod can subdue a big carp if it has a fairly decent backbone and a reel with a smooth drag set at half the breaking strength of the line.

After casting out, leave your bait alone. Simply let it settle to the bottom and hold your rod steady or, better yet, rest it in a low-profile rod holder or even a forked stick. The more you move the bait, the more likely it is to be covered by weeds or sink into the mud. Just leave a slight amount of slack in your line and let the bait sit.

Carp can be finicky when it comes to taking a bait. They frequently inhale an offering and spit it out before you can set the hook. This activity registers as a quick twitch in the line, movement that can also be caused by fish bumping into your line as they swim around it. True strikes, by comparison, see the line stretch tight and head off on a quick, steady path. Set the hook fast and it’s off to the races.

While carp show a marked preference for feeding along the bottom, they can also be tempted to take pieces of bread floating on the surface. When you know the fish are nearby, tear two or three slices of white bread into quarters and toss them into the water. If the carp are inclined to rise, they’ll quickly begin slurping at the bread. To hook these surface feeders, use an 8- to 10-pound-class spinning outfit and a floating chunk of crust. Fishing lighter gear increases casting distance and switching to a smaller, size 4 beak-style hook helps keep the bread from sinking. Hold onto your rod when surface fishing and strike as soon as the bait vanishes in a great big swirl.

While some anglers still consider carp a trash fish, those who know them more intimately recognize them as gamefish of the highest class. Like big stripers, these fish fight until exhausted, and the large ones need to be revived before being set loose. Handle these bruisers with care, take the time to wash water over their gills, and release them only once they have regained the strength to swim off under their own power.