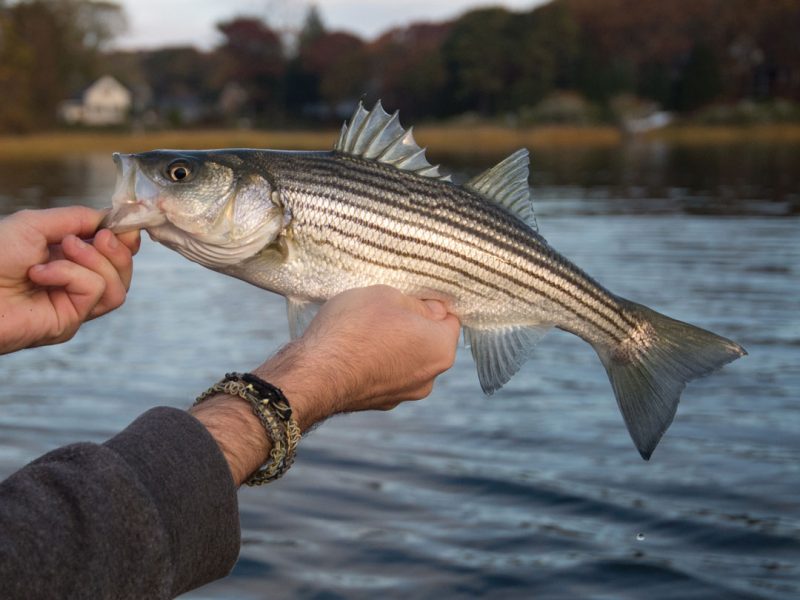 Striper success has a different look at the end of the fall run.

The striper season, if you’re doing it right, should begin and end with a skunk. This is the thought running through my brain like a mantra as I prepare for trips in late fall. We each have to find our own way to brace for that inevitable and final no-fish outing.

There are plenty of us who have hung up the rods at this point in the season, and I’m not faulting anyone for that. Temperatures are low and fish are scarce. They’re the sane bunch, the realistic ones. These are the people who aren’t driven mad by the thought of a striper in an estuary happily chasing silversides like the falling tree that no one is around to hear.

Then, there are those of us who remain ignorantly hopeful when the first frost hits the ground in late October, checking wind, tide, and heartbreakingly low water temperatures like some deeply embedded ritual. They are frustrating times. The stripers are small, and their numbers are low, but we can’t quit until we know for certain that the fish are gone.

In times like these, the late shoulder season (although it’s against our nature to do so), we need to shift expectations. Fishing options are limited and dwindling with each colder night. We’ll take what we can get.

We drag Eddy’s johnboat down a hill in the dark. At the bottom is a pond, a spot where you’d never expect to find stripers. But in April and October, stripers are usually right under your nose if you know where to look—beneath the bridges we drive over every workday or in an estuary just behind the tree line in a cul-de-sac.

Three of us pile into the boat in the hazy half-light of muggy late-October dawn. Durfey drifts close by but out of sight in his kayak. We hear him casting when we’re quiet.

Geoff and I throw Clousers, and Eddy casts a small metal aimlessly into the salt pond. We spot a break a hundred feet away, and with it, that familiar headrush that will never get old. Geoff and I cast to the splash but no one’s home.

“Don’t make me cast,” Eddy says. He flips his lure to where the fish had shown, and just as the braid arches up and settles down onto the surface, he hooks up. It’s small, of course, but feisty, taking little rips of drag and bending the top quarter of the rod. The schoolie is remarkably bright, almost glowing, in the hazy morning. She gets her picture taken and then disappears into the blackness of the pond.

I tie on my confidence fly—a beat-up yellow Half-and-Half with a cracked mojito-green epoxy head. The yellow hackles are bleached from the salt and sun and have the shade of a banana smoothie. She’s not much to look at but she’s got tons of nautical miles and heaps of fishy mojo.

As we round the bend and move silently through the chokepoint toward the main channel, big boulders passing noiselessly below our feet, I let out some line and am not surprised in the least when I feel the telltale thump-thump of a schoolie.

I am surprised, however, when just as I trout-set (as is the usual miscue when getting a take from a bass and typically the opposite when targeting trout), the line goes slack. These mishaps always seem to take us by surprise, regardless of how old and nicked our leaders are and how shoddily our knots turn out when tying them half-blind in the dark.

I slump in my seat, believing my shot at a late October striper has passed and that a piece of my season is now in the lip of some unphased striper. As we continue moving out into the main channel, the estuary unfurls in front of us. Terns and gulls aimlessly search for food. There are no cars on the street and no people in the restaurants. The silence is palpable as we hug the shoreline soundlessly. It just feels fishy.

Where to Find Your Last Bass of the Season

Like the start of the spring run, stripers congregate in late fall in areas with the warmest water and biggest concentrations of bait – inside estuaries. There, lingering peanut bunker and silversides hold the stripers until falling temperatures send the bass back to the ocean.

Unlike the spring, oceanfront beaches can produce lights-out fishing late in the fall, though this is feast or famine since the fish are constantly on the move. Anglers must cover water, but the reward can be a fish on every cast until the school moves on.

Harbor mouths, inlets, and tidal creeks also fish well late in the season, usually during afternoon tides that flush the last of the baitfish out of the backwaters and into the mouths of waiting stripers.

Diving birds can lead the way to bass along the beachfronts, but in the backwaters, look for structure like choke points, channel edges, and creek mouths.

Up against the marsh grass, a swirl breaks the mirror finish of the water. Then, a V-wake. Then, a tail slap.

One of the draws of fishing for stripers is discovering the spectrum of ways in which they feed, where they feed, and how we target them. Seeing a bass tailing along the edge of the marsh grass on the flood tide is one of the most unique ways to do it, especially in the last week of October.

We chase after the elusive, tailing fish for a while to either get a shot with a fly or the camera, but we eventually move off into the estuary where some terns had become very interested in a particular cove. We hear the splashes before we see them.

Chasing down topwater stripers tends to reduce us all into younger, less cynical versions of ourselves. So, seeing the splashes a few hundred yards away, Eddy laughs maniacally and opens up the electric motor. The johnboat pushes a big, heavy wake and planes low. Geoff and I stand on the not-exactly-stable floor and get into position to cast. We strip fly line through excited hands into two messy heaps at our feet, tangled in backpack straps and under bags of Bugles. The breaking bass stay up and we get our shots at them as they crash baitfish around us.

Geoff sticks one on his 2-weight and it bends to the cork as the disc drag whines. I get a take and finally give the fish a good strip set, but it tugs like a little fish. I let the line slip through my fingers to bring it down to the reel because I think it might be the last time I’ll get to feel that satisfying ping as the last bit of line slaps onto the spool.

We land our fish and drop them right back into the water. Their schoolmates continue blitzing. 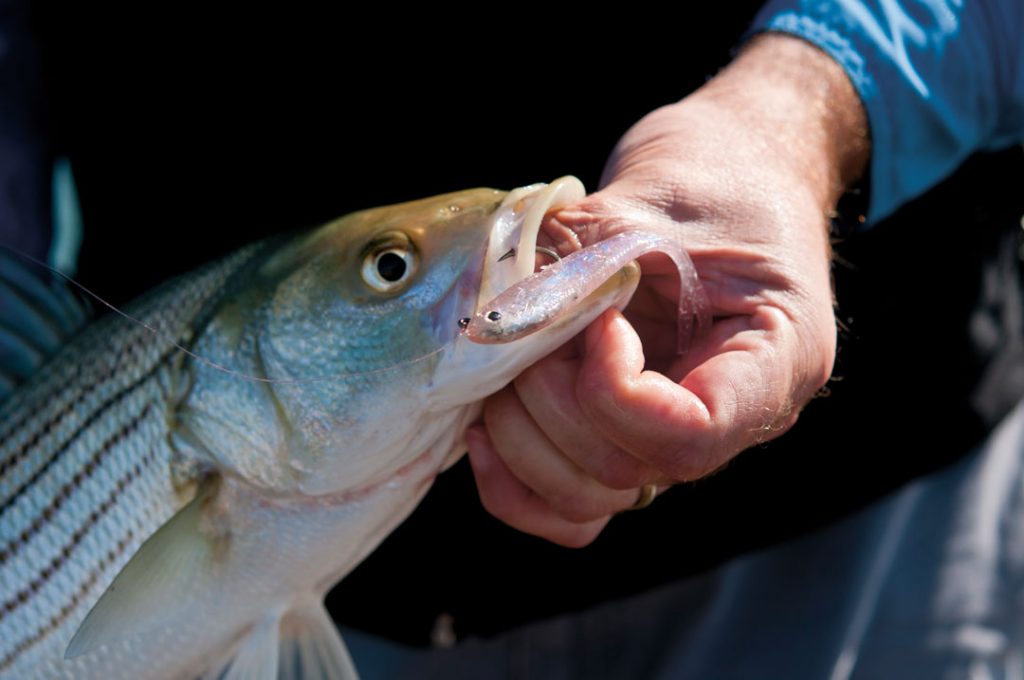 Lures to Catch Your Last Bass of the Season

With the exception of unreliable sea-herring schools—which stay well offshore most seasons—the majority of late-season baitfish are small. Silversides and sand eels are the usual fare for end-of-the-year stripers, so scaled-down lures offer the best chances at catching your final bass of 2020.

Soft-plastic paddle tails, 4 to 5 inches long, paired with ½- to 1-ounce jigheads are a staple in the bays and along the beaches. Diamond jigs and other slim metals are standard offerings for cold-weather stripers, as are smaller minnow plugs. Pairing every lure with a teaser will improve your odds of connecting with a south-bound bass.

Doubling up is fun, regardless of the size of the fish. Tripling up is a relatively rare phenomenon. But a quad? A golden sombrero of stripers on two separate but close-by vessels? Now that’s a real trip-maker. All four of us hold our stripers up to some imaginary camera, smiling like idiots, then we drift the estuary for the next hour and rarely go five minutes without a fish.

All the fish we catch are bright, carbon copies of each other. They are plump from gorging on the clouds of young-of-year baitfish in the river, their lateral lines black and solid. They’re eager, not the least bit selective about what we put in front of their mouths, and I’m thankful for their lack of inhibition after two months of frustrating albie fishing, midge-eating trout, and unfavorable stretches of weather.

The warm, windless morning gives way to a low-pressure system, shifting the wind slightly to the north and dropping the temperature a noticeable few degrees. A slight chop ripples the estuary and we head back into the pond where we started. We drift along with the wind toward the dirt boat ramp. Geoff and I cast our flies, trading off prime locations but eventually string the rods up.

“That it?” It feels like the end of something.

“Don’t make me throw,” Eddy says, lifting his metal. He casts toward the shoreline and comes tight almost immediately. The last striper of the morning comes boatside while we settle for a few dozen schoolies. But, if this is what settling is at the end of fall, then I’m okay with it.