Over my long angling career, I have had many bewildering surprises. Yet, none have been more memorable than catching largemouth bass from bodies of water that were believed to be “fished out” and devoid of bass. The most remarkable of these experiences involved catching numerous bass over 5 pounds from a pond that anglers considered to be just a “pickerel hole.” Similar small bodies of water have relinquished some of the largest bass I have caught throughout the Northeast. These have included several fish that pushed the scales beyond 7 pounds, with one northern behemoth of 9 pounds, 2 ounces.

Modern day anglers gravitate toward well-known lakes and ponds, and avoid those that have fallen out of favor. This is especially true in today’s day and age where social media allows for instantaneous reporting of where the best and most active bites are happening. However, it is sometimes the waters that fly under the digital radar that hold the grandest surprises.

Granted, there are situations when certain lakes experience eutrophication resulting in excessive vegetation and eventual oxygen depletion, and that dramatically affects the ecosystem and the quality of fishing. In severe cases, such lakes can almost appear “dead,” barren of any catchable populations of fish, leading some anglers to conclude that the lake is no longer worth their time. That is often far from reality.

When I see a pond experience such a die-off, I am reminded of the line from Jurassic Park spoken by Jeff Goldblum’s Dr. Ian Malcolm, “Life cannot be contained. Life breaks free…life finds a way.”

Anyone who has spent time recreating in the outdoors has seen this principle at work. The process of natural selection, species adaptation, and survival instincts can individually and collectively produce awe-inspiring results. Therefore, it should come as no surprise that largemouth bass, faced with adverse conditions, can continue to endure, and in some instances thrive, despite the odds. It is the wise angler who considers this when selecting where to fish. One of the most appreciated benefits of fishing lakes that most anglers have abandoned is the ability to cast to unpressured fish with a relative degree of solitude.

Back in the early 1980s, a friend and I had the opportunity to fish a remote Long Island pond that was believed to be devoid of largemouth bass, though it had a reputation among a small circle of anglers for relinquishing sizeable chain pickerel. Due to the difficulty of getting to this pond, and its alleged lack of any largemouth bass, it received minimal angling pressure. But, for us, the appeal of exploring an underfished and nearly inaccessible body of water was motivation enough, regardless of the variety of fish we expected to catch. During the first few hours of fishing this isolated pond, we caught and released 18 exceptional pickerel, but those fish were just the warmup for what was to come.

The next fish to strike the artificial was our first big surprise: a healthy bass that registered an even 6 pounds. Not a bad fish from a pond that supposedly contained no bass. Once it was released, we resumed fishing and the magic continued. By the end of our day on that “bass-less” pond, we caught and released six exceptional largemouth bass that ranged in size from 5 ¾ to more than 9 pounds – most of them were between 6 and 7 pounds. The biggest fish that day remains my largest Long Island bass! If we’d written off the pond as nothing more than a pickerel hole, the miraculous day of fishing we enjoyed would have never happened.

As one might imagine, a fishing day of that magnitude acted as a magnetic draw for return trips. Indeed, I fished that pond several more times that season. Although we never replicated our initial success, we caught and released a number of other quality bass. Each trip to that pond produced results and I never saw another angler there.

Not long after that fateful fishing trip, I relocated to New Jersey to follow a corporate career, and I left behind many beloved fishing and outdoor connections, none of which were more significant than that small pond and its secret bass. However, freshwater bass were never far from reach. I lived along the Lower Delaware River for 17 years and enjoyed many successful outings for smallmouth, largemouth, and striped bass that moved into the Delaware to spawn. It was more than 25 years before I returned to test the waters of that pond once again.

As I eased the kayak back into the pond, the first thought that struck me was that after all those years I was back here, alone again, embarking on a journey of rediscovery. Visions of big bass swam in my head, but I’d figured there were slim odds of a repeat blockbuster day decades later. I’d heard that the pond had gained somewhat in reputation and others had sampled the fishing, yet it was by no means heavily fished. It was better known as a scenic stop on a hiking trail than a quality fishing hole. In addition, this puddle in the woods did not relinquish its bounty easily, so anglers looking for quick and easy catches steered clear. 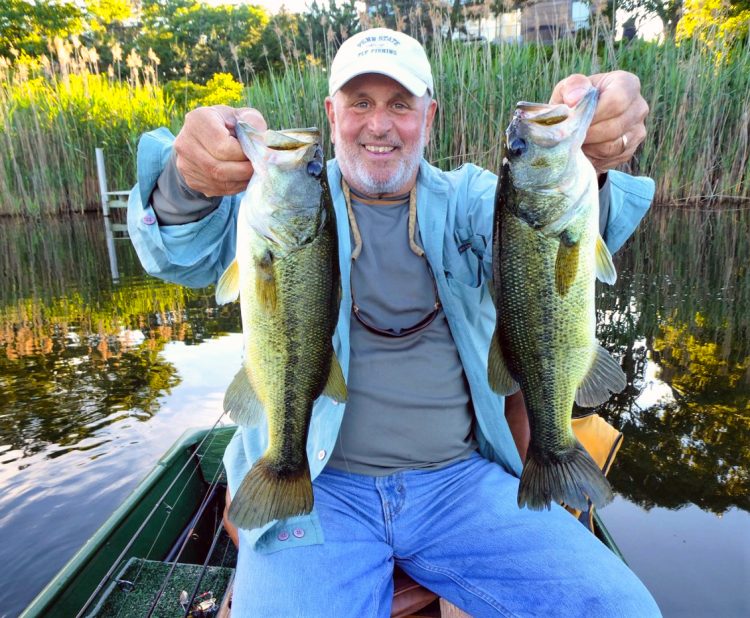 As is typical of small ponds in the Northeast, heavy summer vegetation and lily pads filled the perimeter of the pond and all of its arms and coves. Although I eventually fished open water, I began casting in the thick of the pads since bass often retreat to their cover and comfort during the heat of the summer months. This made for somewhat tough fishing, but if bass were hanging out among the pads, the rewards might be well worth the effort. That was exactly how things turned out for me during this reunion trip.

Maneuvering the kayak in and out of the dense lily pads, I dropped my soft-plastic lures into all the likely-looking pockets of open water. A couple small bass obliged, and I wondered if they might be the progeny of those big bass of long ago. That thought gave me a sense of continuity and a connection to the past. It was a good feeling. As I silently glided around a bend in the shoreline, I came upon a perfect blend of structure and bass habitat.
With the kayak positioned to offer optimum coverage of the area, I made the cast – that was all it took. No sooner had the plastic bait hit its mark and began to sink than I felt the telltale tap of a biting fish.

Line moved across the opening in the pads and as the hook was set, the bass headed toward open water. That was a fortunate move for me and a mistake by the bass, for if it had reversed course and gone into the dense tangle of cover, the day’s prize would have most likely been lost.

After an intense contest of give and take, and a bit of heavy breathing, the big bass was draped across the full beam of the kayak with much of its mass resting on my legs. It weighed in at 7 pounds, 14 ounces. Catching that fish was like seeing an old, good friend after a long absence—we picked up right where we left off. I eased my new friend back into the water and gave thanks for the unanticipated encounter. The day went on to be my second-best day fishing on that neglected pond in almost thirty years.

I first started fishing the ponds and lakes on Long Island in the early 1970s. At that time, several of the largest bodies of water received most of the angling attention. This was an era that marked the beginning of the bass tournament phenomenon, and interest in black bass fishing peaked, spurring numerous local tournaments.

The Long Island Bass Masters was the first Bass Anglers Sportsman Society chapter to be formed in the state of New York, and the first B.A.S.S. Chapter north of the Mason Dixon Line. The club had a large and active membership, and did much to promote bass fishing, youth involvement, and conservation of the species; the organization’s outstanding efforts endure to this day. Many of the club’s members and other Long Islanders afflicted by the bass “bug” tended to fish the largest and most prominent bodies of water on the Island. Over time, and with the growing popularity of bass fishing, those waters received a disproportionate amount of angling pressure, to a point where there was a noticeable falloff in the quality of fishing.

Eventually, one of those lakes fell out of favor, and anglers moved on to more productive bodies of water. Following my own brief hiatus from that lake, I returned one weekend to get my personal update on the lake’s status, and fished there for two days. It surrendered a fine catch of largemouth bass, including a number of bass that exceeded 5 pounds, with one fish pulling the scale to 6 pounds, 8 ounces. Was this result simply a matter of good luck and timing, or was it an indication that the lake had returned to its old form? With the benefit of hindsight, the day’s outcome was a combination of prime seasonal timing, unpressured fish, and a revitalized lake that had the chance to recover from some minor ailments. 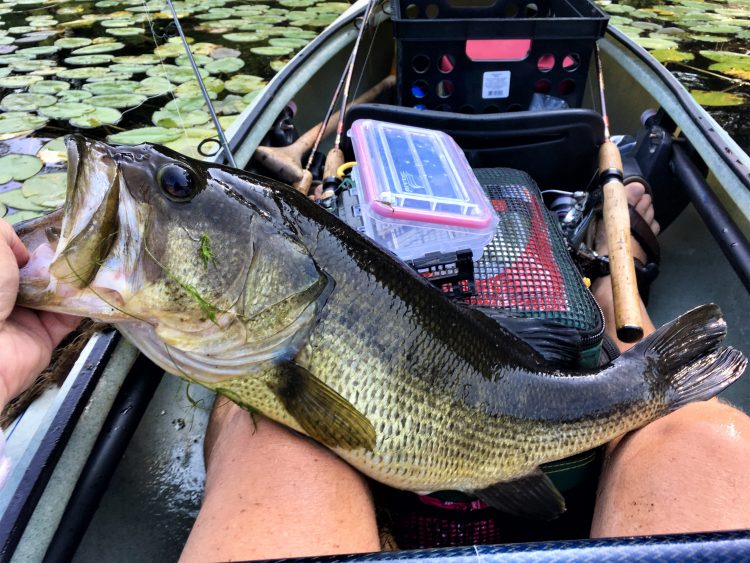 There is no doubt that nature does finds its own way when facing adversity. Even in extreme cases such as major oil spills, recoveries happen. Although some of those disasters require the helping hand of the same humanity that caused the problem, the natural world eventually takes charge to correct itself. So it is with ponds that undergo cyclical changes—left to their own devices, they often bounce back.

That is why anglers should never write off a body of water that was once productive and has fallen from grace. I’ve come to embrace the so-called down and out ponds, and make it a point to schedule time on those waters. However, I do apply a few principles and practices when fishing them to put the odds in my favor.

The first step is scheduling my trips to coincide with peak times of the season or the prime times of the day. While bass can be caught throughout the day and throughout the seasons, concentrating on periods of heightened activity helps to cut down on the time needed to determine if bass are swimming in a pond. It also pays to give a rebounding lake or pond more than one try. My general rule is that I make three successive outings before writing a pond off.

Include a couple fished-out bodies of water on your calendar for the upcoming season. (I know I will continue to do so.) The surprises just might amaze you and even change your perceptions and outlook on these perceived second-class lakes and ponds.