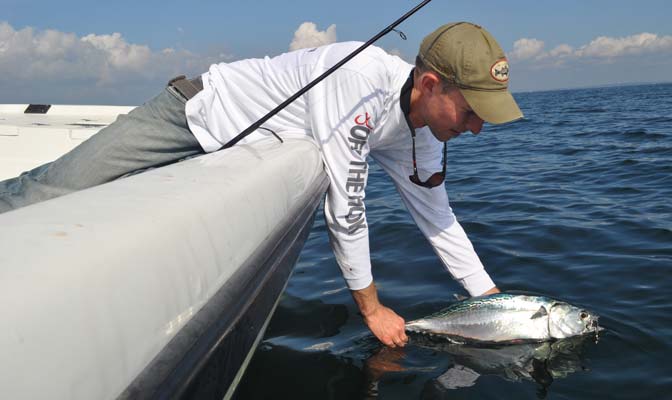 There are no truths when it comes to figuring out false albacore.

There is a reason why the lingo fishermen use to talk about false albacore sounds like it’s from an out-of-date mental health textbook. These “funny fish” inflict albie addiction with their unpredictable behavior and bipolar mood swings. Up one second, down the next, they’ll strike with abandon on the incoming tide and ignore the finest presentations on the dropping tide. It’s enough to drive a fisherman crazy.

More than any other gamefish in the Northeast, albies display a cohesive attitude when they school up and feed. Their group behavior is influenced by the type of baitfish they are feeding on, the weather conditions, and the time of day, but it’s anything but predictable. Occasionally, the stars align and albies let their collective guard down, striking a range of lures with abandon, and every fisherman in on the action will have multiple hookups. Usually, they live up to their reputation as picky, keen-eyed lure snobs, boiling on bait but ignoring artificials. At these times, there might be only one tactic, lure or style of presentation that is the key to unlocking their jaws. In a fleet of boats chasing albies, the few anglers who have figured them out will far outfish the rest.

However, false albacore will always keep anglers humble. Just when you think you have the formula locked down, the attitude of every albie in the area will inexplicably make a 180-degree turn.

If there is a secret to consistent albie success, it is to embrace their always-changing, two-sided nature. There are no absolutes when it comes to false albacore. Stick stubbornly to one method or tactic, and you’ll endure long fishless stretches while you wait for the fish to come around to you. Switch back and forth between what at times can seem like opposing advice, and you’ll improve your chances of adjusting to their attitude.

The ability to reach a bunch of albies when they pop up on the surface is often what separates the guys who catch from the ones who don’t. From a boat, being able to make a long cast means you won’t have to run right up on a school and spook them with your engine. From shore, casting distance is almost always necessary to reach fish. Start with a long spinning rod (at least 7 feet for boat fishing and 9 feet for shore fishing) that has a soft tip and pair it with a spinning reel loaded with 30-pound-test braided line. Use that outfit to fling long-casting metal lures like the Deadly Dick, Kastmaster XL and Sebile Fast Cast.

…But be Willing to Sacrifice Distance
Distance can be the difference, but it can also represent a trade-off for presentation. If you are reaching fish and swimming metal lures past their noses but failing to get a response, you might want to try soft plastics. White Zoom Flukes and similar soft-plastic lures rigged on offset worm hooks might not cast far but they have an action that will often trigger strikes when nothing else will. Fly-fishermen will never achieve the distance of a spinning-rod-launched metal lure, but they are often the high hooks in an albie blitz. If you see bent fly rods all around and you’re holding a spinning rod, try fishing a fly by rigging it behind a casting bubble or hookless popper.

False albacore are incredibly fast swimmers, able to win in a fin race with any baitfish. It’s almost impossible to reel a lure too fast for an albie to catch it, and they often react positively to the straight-line speed of a “fleeing” lure. Be ready to start your retrieve or begin a two-handed strip as soon as your offering hits the water. False albacore are almost always looking up, so keep your bait high in the water column, even skipping it along the surface at times to attract an albie explosion.

…But Sometimes Slow it Down
I was once badly outfished by a partner throwing exactly the same metal lure. The only difference was his retrieve: he would cast into breaking fish and do nothing, letting the lure sink for at least five seconds before beginning his retrieve. I have no idea why it worked, but it did.  A slower retrieve can help keep your bait in front of feeding fish for a longer period of time, increasing your chance of a hookup. Also, there are times when albies will refuse to hit a fast-moving lure but will go nuts over a slow-twitched bait or even a paused soft plastic or fly allowed to sink in the water column like an injured baitfish.

Albies, like most members of the tuna and mackerel family, are known for their excellent eyesight. When they are focused on eating one food item, anything that isn’t the same size, color and profile will be totally ignored and only a near-perfect match will score a strike. This favors fly-fishermen, who can match the color and diminutive size of almost any baitfish, but spin-fishermen have plenty of artificial options to choose from as well.

…Or Stand Out in a Crowd
Sometimes, such as when the albies are feeding on thick clouds of half-inch bay anchovies, matching the predominant bait is just about impossible. Other times, even the best match gets ignored because there’s simply too much bait in the water. It goes against conventional wisdom, but sometimes only the lures that stand out get attention from albies. You can stand out by going larger or choosing a profile or color that doesn’t match what the albies are eating. I’ve seen wooden needlefish plugs produce when albies are blitzing on peanut bunker, and I’ve seen hot-pink lures outfish natural shades. Once, when albies were feeding on tiny bay anchovies, a large Swedish Pimple produced strikes when nothing else would.

When albies pop up at the surface, you often have only a few seconds to launch a cast into the school. If you’re a spin-fisherman, keep your bail open, your finger on your line, and your eyes peeled, ready to launch a cast. Fly-fishermen should have their lines stripped and clear of any potential hang-ups, ready to haul off with as little false-casting as possible. It might be tempting, after 10 minutes without a sign of albies on the surface, to make a blind cast. If you do, it almost guarantees that just as you land your lure off the starboard side the fish will show up 20 yards off the portside.

…But Sometimes Cast Blindly
Then, there are the times that I’ve stood ready, waiting patiently to launch a cast, and the angler next to me gets lucky by firing off casts in the general area where the albies last appeared.  Albies can absolutely be caught by blind-casting, and there are times that it’s a good idea to keep firing off casts. For example, if you are fishing from shore and limited to where you can reach with a cast, it makes sense to keep your lure in the water as much as possible. If you are fishing an area like an inlet or around a navigation buoy and the albies keep appearing within a focused area, then by all means, pepper it with blind casts.

The greatest lesson I have learned from chasing false albacore in a kayak is that lacking an outboard motor is not a drawback. In fact, it can actually help you catch more albies. Stealthiness aside, fishing from a kayak forces you to be patient, since running down every school that pops up isn’t an option. Instead, you have to position yourself in a likely area and wait for the fish to come to the surface. Often, albies repeatedly feed in the same general areas, and while boaters ping-pong from feed to feed, staying in an area where they have recently popped up puts you in the best position when they come up again—within casting distance, and all by yourself.

…Or Run and Gun
Patience has its limits, though, and there are times when albies are not popping up in predictable locations or moving with the tide, and drifting into a feed simply isn’t happening.  There are also times when, unless you are casting into the biggest topwater blitz that pops up, you simply aren’t catching. Running and gunning is, sometimesß, necessary, but don’t make it a necessary evil. Be respectful of other boaters, try to avoid running right into the fish and putting them down, and always be safe.

Rule #1: There are No Rules

Yes, starting with Rule #2 wasn’t a typo.  The first rule of false albacore fishing is accepting that there are no rules, and that is what makes the unpredictable albie one of the most exciting gamefish in the Northeast.

For example, one of my favorite memories of albie fishing occurred when I was kayak fishing just off a rocky point, with good numbers of fish feeding all around me.  After 20 minutes of fruitless casts with metals and soft-plastic baits, I confidently pulled out my secret weapon, a clear-plastic casting bubble half-filled with water that had a tiny bay anchovy fly on 10-pound-test fluorocarbon trailing 3 feet behind it. On my first cast, I had a perfect view as one of the biggest albies I’ve ever seen charged up behind my fly, launched from the water, and came down in an explosion of white water—its jaws clamping around my hookless casting bubble. It was the only hit I had that day.