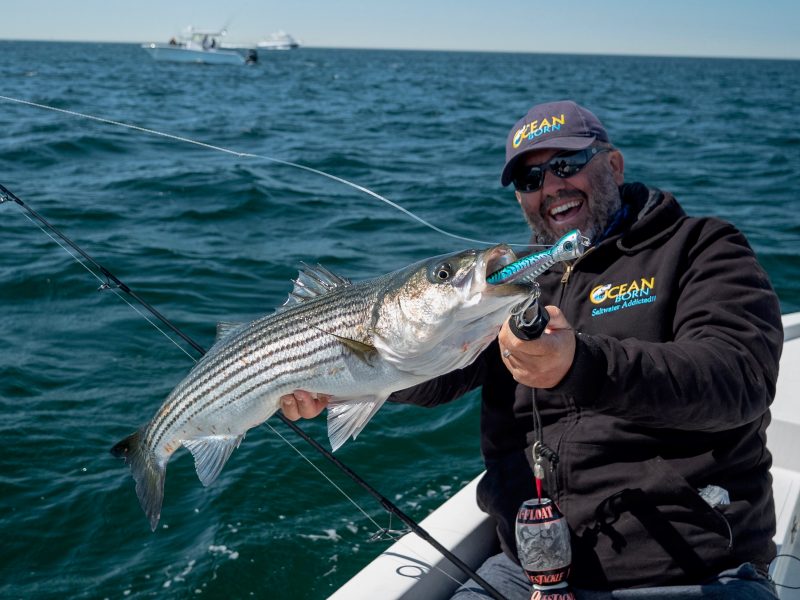 I felt a little bit of deja vu on Wednesday when launching the boat on a warm spring morning on Cape Cod to test out some new and innovative lure design with my friend Patrick Sebile. The last time we did that was in 2010, when we used Sebile Lures Magic Swimmer and Stick Shad on large stripers and bluefin tuna.

Eight years later, Patrick has parted ways with his namesake lure company to begin a new fishing tackle company, A Band of Anglers (ABOA). Our plan for the day was to test the first lures offered by Ocean Born (the segment of ABOA dedicated to hard baits for large saltwater fish), the Flying Popper and the Flying Pencil.

When Patrick and I set the dates for this trip over the winter, I expected the waters of the Outer Cape and Cape Cod Bay to be awash in big, surface-pounding stripers by the last week of May. Thanks to a bitter cold spring, larger stripers stayed late in their spawning rivers, and were behind schedule in making their return to the Cape. The fish I had been hearing about were feeding deep, which, I thought, would be far from ideal for field-testing topwater lures.

Patrick did not share my concerns. He was excited to show the versatility of his new plugs, especially the heavy SLD (for super long distance) models, and was confident that if we could find the fish, we’d be able to catch them on the lures, wherever they were feeding.

I was skeptical, but knew better than to doubt him. Patrick has fished all over the world, caught more than 700 species of fish (compared to 100, give or take a dozen for me), and is one of the best fishermen I have ever shared the water with. So, I wasn’t too surprised when, early in the day, after we marked stripers holding just off the bottom, Patrick worked a Flying Pencil SLD like a jig through the water column and connected with a 20-pound-class bass.

We caught a couple more like that until we got the call that bass were feeding on the surface not far from our position. While these bass were feeding on top, they were on seriously small baitfish and proved tough to fool. Once again, Patrick was excited by the challenge and eager to show off the versatility of his lures. By varying the retrieve with his Flying Popper SLD, intermittently causing it to swim like a Danny plug, walk-the-dog like a Zara Spook, and pop like a traditional popper, he was able to coax the picky bass into biting.

A little later, he dug into his bag and pulled out the Dart Spin, a prototype soft bait from another branch of ABOA, and proceeded to clean up on the stripers. After some bargaining, I was able to convince him to let me try one as well, and before long, I was getting in on the fun as well.  The Dart Spin has a fluke-style body, but instead of a forked tail, it has a willow-leaf blade molded into the tail. And the bass loved it.

As the tide slacked and the stripers moved off to deeper water, we went to break for lunch when we heard of another bite happening nearby. Schools of bass were smashing squid, and the Flying Popper and Pencil drew savage strikes. I had the best luck swimming the Flying Popper. On a straight, slow retrieve, I could easily feel the plug kicking.

Before the end of the day, Patrick pulled another prototype from his bag of tricks–the Flying Crusher. This is the lure that’s incorporated into the Ocean Born Logo, and one he expects to be the flagship lure of the brand.

The Crusher is a stickbait that, on a straight retrieve, swims erratically, sweeping from side to side like a darter, kicking like a minnow plug, and occasionally rolling on the surface. Patrick said that with many lures, to get that many different action requires working the rod in a variety of ways. His goal was to create a lure that achieved all of those actions on a simple straight retrieve. That erratic action was enough to raise the largest striper of the day, and the first fish ever on the Crusher. It will be far from the last, or the largest. I have my sights set on bluefin when the Crusher is released to tackle shops this September.

For now, fishermen can find the Flying Pencil and Flying Popper at some tackle shops, or in their sign-up packages for the Striper Cup. I can’t wait to use them throughout the season, and I won’t again make the mistake of only thinking of them as “topwaters!”