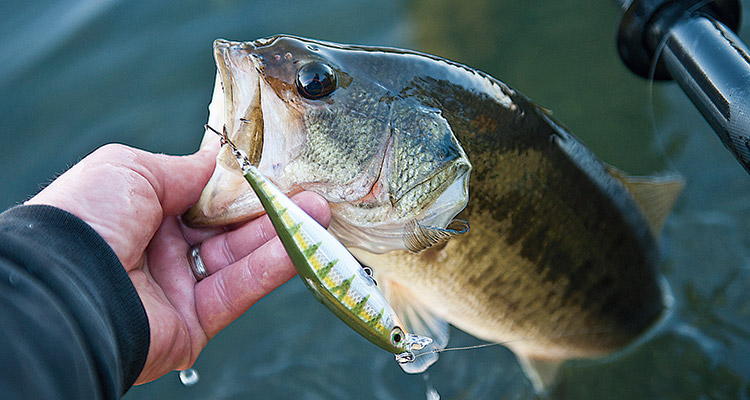 In its final moments, a minnow will flash, kick its tail toward the surface, and slowly fade toward the bottom. This baitfish death rattle inspired Rapala’s newest jerkbait lines, the Shadow Rap and the Shadow Rap Shad.

The Rapala story began with a jerkbait. Lauri Rapala carved the first minnow lure from cork, then spruced it up with tin and melted film negatives. The resulting action and realistic profile began one of the most prolific lure styles available today.

Rapala continues to innovate with minnow plug design, experimenting with different materials, lip sizes and styles, and profiles to produce different actions. When creating the Shadow Rap family, the goal was to imitate a baitfish that was about to give up the ghost.

While most jerkbaits are selected for their big, reaction-strike-triggering action, it’s the smaller, subtle actions that set the Shadow Rap apart. On the pause, the tail end of the Shadow Rap moves toward the surface before the lure settles and slowly begins to sink. As the bait falls, it vibrates with what Rapala calls the death quiver. This slight, barely noticeable action completes the imitation of a wounded baitfish as it “swims toward the light.”

When a fast, erratic retrieve is needed, the Shadow Rap’s flat sides give it a unique dart and wobble that you won’t find in round baits. Worked with sharp snaps of the rod, the Shadow Rap darts side to side, with little forward motion, keeping it in front of a bass for longer, while still moving erratically enough to make the fish pounce. “With the right slack line and the right feel, you can make the bait do a one-eighty,” explained fishing pro Al Linder. Getting the Shadow Rap to spin around and face a following bass is a sure way to trigger an aggressive reaction strike.

The Shadow Rap comes in two styles, a shallow-running model that works depths from 2 to 4 feet, and a deep model that runs 4 to 8 feet down.

The Shadow Rap Shad has the same side-to-side, flash and roll action as the Shadow Rap, but on the pause it slowly rises, nose first, instead of sinking. As it rises, the lure has a shimmy, sending out dying-baitfish vibrations that bass home in on. “With the slow rise, the Shadow Rap Shad mimics a dying forage fish better than anything else out there,” noted bass pro Mike Iaconelli.

The Shadow Rap Shad comes in deep and shallow versions as well, the deep model reaching depths of 5 to 6 feet, while the shallow version swims between 3 and 4 feet.

The Shadow Rap and the Shadow Rap Shad belong in your rotation from ice-out to late fall. The slow sink of the Shadow Rap makes it a great pick for early spring and cold waters when a slow-sink will keep the bait right in front of the bass. In the fall, when a cold snap causes a die-off of some of the lake’s shad, the Shadow Rap Shad is tough to beat because bass key in on the dying shad action perfectly replicated by this bait. In warmer weather, a quick retrieve, causing the bait to move right to left with very little forward motion, will draw strikes even from lethargic bass.

The Shadow Raps come in a wide array of colors, from realistic baitfish impressions to loud eye-grabbing colors. Each bait features a lifelike scaled finish with a prismatic eye and top-of-the-line hardware, along with needle-sharp VMC trebles.