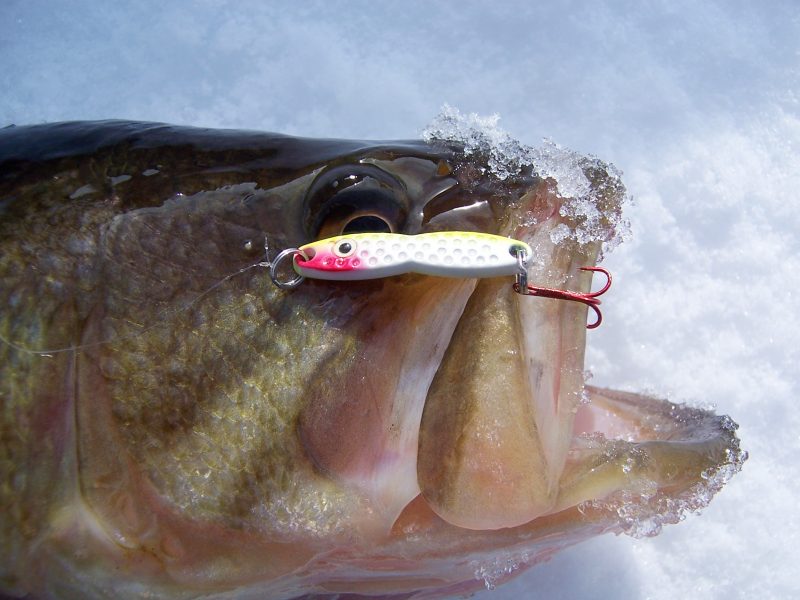 The first attribute I look for in a lure is obviously its ability to catch fish. The second thing I look for is versatility. Can the lure be used in multiple situations for multiple species, at different times of the year, and in both fresh and saltwater? Those are the lures I want in my tackle bag.

Last winter I began seeing lots of chatter on ice-fishing forums about a spoon from PK Lures called the Flutter Fish. While I had heard of PK Lures because the current ice-fishing world record catch-and-release walleye was caught on one of their spoons a few years ago, I was not familiar with the Flutter Fish and had no reason to try one other than the volumes of positive posts on it.

I tracked down one of the more prevalent posters on the websites, Thomas Thibeault. It turns out Thibeault is a sales representative for PK Lures and also runs BIP Outdoors in Atkinson, New Hampshire, with his two teenage sons. Despite his obvious interest in promoting the lure brand, my discussions with Thibeault made me realize he chose to promote PK Lures because he believes in them.

PK Lures currently makes seven different lures, but the Flutter Fish was their first. I talked with the owner of PK Lures, Pat O’Grady, to find out more about this lure and its evolution. O’Grady strives to stay with the idea of simplicity in his lures and parses catching fish down to vision, vibration, and scent. “If you can make a lure that produces a nice visual effect, that’s good. If it produces vibration too, that’s even better, and the Flutter Fish does both,” said O’Grady.

As a teenager, O’Grady was struck with the ice-fishing bug and would spend hours jigging each winter on Diamond Lake, a very clear water body in Wyoming. He transitioned from marabou jigs to spoons after seeing the success of other ice anglers, and would lie on the ice, watching the action of various spoons and how the fish reacted to them. Always thinking about better ways to catch more fish, he would observe how minnows acted when wounded or scared. He later became a fishing guide until family matters required him to stay closer to home.

Following the motto that catching fish is about getting the odds on your side, O’Grady started working on what would become the Flutter Fish in the early 1990s. Even before testing it, he was convinced the prototype would catch fish because of its shape and weight distribution. A quick plop into his hot tub confirmed this as he said, “The action mimicked a dying baitfish almost perfectly.”

O’Grady began to make more Flutter Fish, giving them to friends and fishing with them himself, and they were the first lure he ever caught a limit of walleye on. They were first sold in 1994 as the “Real Deal Flutter Fish.” He continued to work on the lure, perfecting it into its current version. When asked about the success of his lures and company, O’Grady was very humble, only saying, “I’m thankful that the lures work the way I designed them to and that the fish are responding.”

Talking with O’Grady and Thibeault about what species can be caught on Flutter Fish is like listing most of the fish you can possibly pursue. Walleye, trout, largemouth and smallmouth bass, white and yellow perch, crappie, pike, pickerel, bluegill, striped bass, bluefish, redfish, and weakfish all have been fooled by the Flutter Fish.

According to O’Grady, one of the reasons the Flutter Fish works so well is because its length-to-weight ratio results in a slower falling rate than most lures, meaning it stays in the strike zone longer. Additionally, he relayed that the glow eyes on all Flutter Fish help to increase catch rates, as does its unique fluttering action.

Originally designed as a vertical jigging lure, the Flutter Fish is also effective for casting and trolling. When casting, O’Grady suggests letting the lure sink almost to the bottom, reeling a few turns, ripping the lure back toward you about 4 to 5 feet, and then letting it flutter back down again. Of course, there are variations on this, such as moving your rod tip upward so the lure rises more vertically, or moving your rod tip back to your side so that the lure moves more horizontally.

As any spoon-using ice angler knows, it takes time to learn some of the tricks and techniques needed to become proficient when jigging with spoons. Luckily, Thibeault dispensed some great pointers to use while jigging with the Flutter Fish. His first tip was to tie your line directly to the split ring rather than taking off the split ring and using a cross-lock snap. He also prefers a medium-weight 28-inch jig rod with a fast action, and uses monofilament line.

Flutter Fish, especially the larger sizes, will glide quite a distance away from you when dropped vertically. “When using half-ounce or larger Flutter Fish, allow the lure to hit bottom and then hop it back along the bottom until it is directly beneath you,” said Thibeault. Once it is below you, use a slight 3- to 4-inch bounce followed by a dead-stick. Continue working the lure up the water column. Sometimes, fish will nail it on the drop and other times they want it jigged fast after bouncing bottom. If fish are reluctant to hit, try keeping it in their faces until they strike or swap the treble for a size two Aberdeen hook and tip it with a live minnow.”

According to Thibeault, a series of short bounces (2 to 4 inches) 3 feet off the bottom followed by a dead-stick drives panfish nuts. For lake trout, he uses a more aggressive jigging technique. He first pounds bottom with the lure – creating a silt cloud, lifts the lure 2 to 3 feet off bottom using 8- to 10-inch pumps of the rod, and then lets the spoon flutter back to the bottom. He repeats this cadence as needed and works the water column depending on how fish are reacting to the lure (based on his fishfinder).

The Flutter Fish is offered in nine impressive colors, including some with glow paint, and nine sizes ranging from 1/8- to 2½-ounces. The 1/8-, ¼-, and 3/8-ounce lures are perfect for panfish and smaller trout, while the 3/8- to 1-ounce versions work well for lake trout, bass, and other large predatory fish. Saltwater anglers would generally do best with 1½-, 2- and 2½-ounce lures (the 2½-ounce Flutter Fish stretches almost 6 inches). O’Grady commented that they are also upgrading their hooks to 4X strong due to the very large stripers some anglers are catching on them in Lake Lanier, Georgia.

So, if you are looking for a lure to add to your arsenal that catches all sorts of fish species, can be used in fresh and salt water, and can be fished using different techniques, give the Flutter Fish a try.