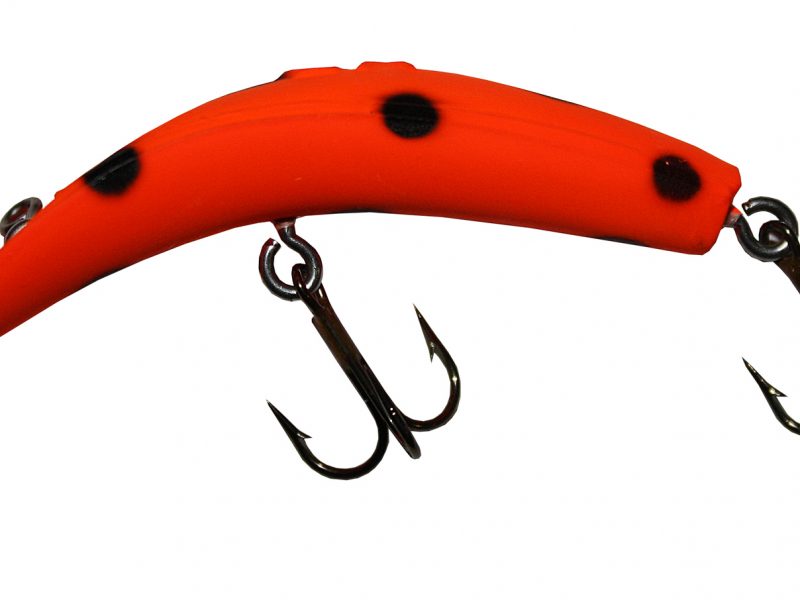 The classic Flatfish is a lure that is recognizable on sight. If you have spent any time on the water at all, chances are you’ve seen or used this banana shaped lure at some point in your life. If not, then surely your father or grandfather has.

The Flatfish was invented in the 1930s by a multi-talented Detroit auto worker named Charles Helin. A devoted fisherman, Helin bounced around from job to job so that he could keep his summers free to fish. Helin also liked to tinker around and create his own fishing lures. During the 1920s, he experimented with a variety of different lure designs, including spoons, spinners, and bass bugs among others. By the late 1920s Helin had fashioned over 100 individual lures, yet he felt there was still one major problem to tackle. Most commercially sold swimming plugs were crudely fashioned and required a precise retrieval speed to create a fish-attracting swimming action. Whenever the retrieve was altered, the action disappeared. Helin believed many strikes were missed due to the lack of flexibility and finesse in the retrieve. And in many cases, it allowed the fish to recognize the bait as being artificial before striking. So Helin decided to try his hand at designing a lightweight swimming plug that could be worked delicately and effectively, even at the slowest retrieval speeds, while increasing the number of successful hook-sets.

Helin began by whittling wooden plugs in different shapes and sizes, looking for the perfect design and action. By spring of 1933, Helin had hand-carved about 1,500 individual plugs. He was getting very close to his final design. In August that year, he did a test trial with some of his final prototypes in Big Lake in Davisburg, Michigan. He and his fishing mates experienced immediate success with the resident bass in the lake. After some final, minor tweaks, the Flatfish was perfected on September 12, 1933. With its trademark, flat-nosed body and offset detachable hooks, the lure produced a life-like, wiggling, swimming action that seemed irresistible to predator fish. Helin knew at once he had found what he was looking for. He immediately dubbed his new lure creation “The Flatfish.”

In 1934 Helin applied for a patent and began marketing the first handmade wooden Flatfish, selling 400 the first year. The popularity of the Flatfish steadily increased, with 1,000 sold in 1935, 2,500 in ’36, and over 10,000 in ‘37. By that time Helin had six employees helping him make the Flatfish. Lure sales were doing so well that he quit his job at the Chrysler plant and founded the Helin Tackle Company. Between 1935 and 1949, over 5 million Flatfish were sold. Helin’s swimming plug would soon become the best selling minnow plug in the world. By 1970, over 40 million Flatfish had been sold.

During the years that Helin ran the company, the evolution of the Flatfish was fairly well documented. In 1922 Helin had begun keeping a fishing journal, and he continued to document his fishing observations and successes throughout his life. An avid photographer, Helin published his first company brochure in 1939, which included photos, letters and testimonials from anglers who used the Flatfish. Subsequent editions included Helin’s own personal experiences, adventures, and musings, as well as fishing and rigging information, lure tweaking tips, and repair instructions. Helin continued this practice for the next 30-plus years. In that time, the Flatfish expanded into several specified models geared toward technique (surface, submerged, trolling, expert), gear (fly rod, spinning), and fish species, (lake trout, pike, musky). The Flatfish was available in a wide variety of colors and sizes, ranging between 1 inch and 7 inches long, featuring several hook styles that included offset pairs (using spreader bars under the lure) and standard inline hook configurations. Helin used smaller, lighter hooks on the Flatfish, which he felt provided greater penetration on hooksets than big heavy hooks, which adversely affected the action. He also discouraged the use of snap swivels with the Flatfish, believing they robbed the lure of some of its natural appearance and motion.

Although early Flatfish models were made of wood, they were later changed to plastic to save on manufacturing and labor costs. Helin later reintroduced a select lineup of retro wooden models for the added cost of 50 cents more per lure. In addition to the Flatfish, Helin patented two other lures: the Swimmerspoon (a metal swimming spoon with an interchangeable plastic insert) and the Fishcake (an oblong shaped surface plug with nose propellers), which was named after a restaurant dinner special.

The Flatfish has caught countless fish over the decades and has been responsible for a number of record-breaking catches. During the 1960s, the introduction of Pacific salmon into the Great Lakes served to give the Flatfish an added boost in popularity and sales. This overwhelming success allowed the active and civic-minded Helin to travel the world, meeting and fishing with anglers of all walks of life, while singing the praises of the Flatfish.

“From some of the stories I’ve heard, he was very outgoing, almost flamboyant,” said Rob Phillips, marketing director for Yakima Bait Company, makers of the Flatfish. “I don’t know if you would call it egotistical, but he was very sure of himself, a bigger-than-life kind of guy, which probably led to his success actually.” This same success, however, spawned countless numbers of mass-produced, commercially sold copies and knockoffs. Helin held great contempt for these “cheap imitations” of his original Flatfish, stating that they were not worth 2 cents and that they “could only catch a gamefish by accident.” He maintained that it took him over 10 years to learn how to make the Flatfish properly, with all the finer details that made it productive. Therefore, any swiftly devised, mass-produced knockoff could not possibly approach the quality, action and effectiveness of his original design. According to Helin, the Flatfish was the only fishing lure that swam perfectly at all speeds and could be slowed down and fished subtly without losing any of its lifelike swimming action.

In the late 1980s, it became time for the elderly Charles Helin to relinquish operation of the company. In 1988 the Helin Tackle Company was purchased by the Yakima Bait Company, makers of the Shad King and Roostertail spinner, among others.

“We’d learned that he was trying to sell it,” recalled Phillips. “I guess he had some family members, but none of them were really interested in taking over the lure business, or their interests were elsewhere.” Yakima purchased all the original molds from Helin and moved the manufacturing operation from Michigan to Granger, Washington. “It really fit perfectly into our line of freshwater lures,” said Phillips. “And it had such a great name and reputation.”

The Flatfish is available in 14 sizes and over 100 different colors and combinations. “We’ve added a number of colors to the line, and we have made a few changes in the hardware specs,” stated Phillips. “In some of the larger sizes we added rattles.” Flatfish can be used effectively with casting or spinning gear, fly tackle, trolling, there’s almost no limit to the lure’s versatility. “Different sizes work for different fish in different parts of the country,” Phillips explained. “You know, we sell a lot of our smaller sizes to trout and bass anglers, and medium sizes to steelhead, trout, and walleye guys, and the large sizes are great for lake trout and salmon.” As a result, an angler’s perception of the Flatfish may just depend on what part of the country (or world) they live in. The fact that the Flatfish has seemingly been around forever further necessitates the ongoing need to reintroduce and reacquaint younger fishermen with the benefits and features of the classic Flatfish, especially those who haven’t grown up with it. “I think sometimes people think of it as an old-time lure, but most people that fish with it continually and like to use it will tell you that it’s one of their most productive lures.”

The Flatfish was one of the first fishing plugs created primarily for consistency in swimming action. The idea was that if a lure could reproduce a lifelike swimming action at a variety of retrieval speeds, not only would it be a top-notch fish attractor, it would also prevent the fish from quickly identifying and discounting the lure as artificial. This novel concept eventually paved the way for an entire generation of modern swimming lures and crankbaits available today. “Every day you hear people say, ‘oh yeah, I remember that lure,’” said Phillips. “‘That’s the lure I used to fish with my dad. Man we used to catch a lot of fish on those!’”