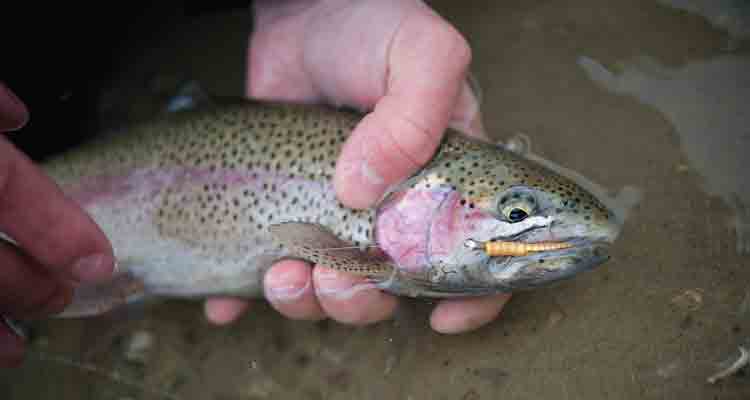 Ask any freshwater angler about his quintessential spring lure, and you’re likely to get answers like the Rapala Husky Jerk or Mepp’s inline spinner. Pose the same question to a stream angler, and you’ll hear “Trout Magnet” almost every time. Probably no bait is more synonymous with a method and species than this tiny lure, and it is first-rate for scoring early spring trout.

I stumbled upon the Trout Magnet many moons ago when I joined a couple of my fly-fishing buddies on a cold April day. I met them at the bait shop with my ultralight spinning setup. As they picked through the fly boxes and grabbed indicators to fix above their nymphs, one of them strongly suggested I pick up a package of Trout Magnets.

He was a little surprised when I said that I had never heard of them. To me, the lure looked a little bizarre: a tiny jighead and soft-plastic body with a split tail. I took his suggestion, though, and decided to give it a shot. I won’t brag about who caught all the trout that day, but it wasn’t the guys with the fly rods.

Over the years, I’ve gathered more evidence of just how deadly this little gem is on trout. I’ve also learned of its massive popularity with anglers who often aren’t willing to share their secrets.

The Trout Magnet is a 1/64-ounce shad dart fixed with a tiny, grub-shaped, soft-plastic body and a split tail. Rigged, the lure is 1¼-inches in length. The body is available in 33 colors and the jighead in 12 colors. A 50-pack of bodies costs $4.99 and a 5-pack of jigheads runs $1.89. Leland Lures also offers kits with multiple colors of jigheads, bodies, and floats.

Jeff Smith and Todd Gaines of Leland Lures in Searcy, Arkansas, “let their secret out” in 1997, when they began selling the bait they had been keeping to themselves for years. “When it comes to rivers, it will out-fish everything,” Smith said, “I’ve yet to be out-fished.” Smith said he and Gaines toyed around with different sizes and styles until they found the one they wanted to use. Once perfected, they had built what would become a legendary bait. Smith attributes the Trout Magnet’s success to the fact that it falls and sits horizontally in the water. Smith notes that trout will more readily eat this presentation as opposed to a jig bouncing off the bottom.

Smith stresses that ultra-light tackle is an absolute must. He normally fishes the Trout Magnet on 2-pound test, but says anything over 4-pound test will not get the desired results from the bait. His preferred way to fish the lure is under an E-Z Trout Float, which he and Gaines created specifically for the Trout Magnet. With constant short twitches of the rod tip, the float gives the bait a lifelike presentation as it moves downstream. The float should be placed at a distance above the bait that keeps it just off the bottom. This enables the Trout Magnet to flow freely with the current, with the bait sitting naturally and horizontally. Smith says, “The flat look drives them crazy.” The E-Z Trout Float comes in packs of 4 or 36, and are priced at $1.79 and $9.99 respectively.

When fishing pools, pockets of slow-moving water, or eddies, Smith says the Trout Magnet can be fished without the float. By casting and twitching on the retrieve, the bait will maintain its flat, horizontal presentation. Letting the bait fall closer to the bottom will get better results.
Although Smith admits the prowess of the Trout Magnet lies in rivers and streams, panfish and bream anglers are no strangers to this tiny sensation. Fishing small plastics under fixed floats is a staple with this crowd, and nothing seems to do a better job at enticing fish than the Trout Magnet. The action given to this bait with constant rod twitches produces an unbeatable presentation.

Fishing tiny lures on super-light line for early season trout can be challenging, but the Trout Magnet and E-Z Trout Float have simplified the presentation and helped anglers of all experience levels catch fish. Add in the fact that you can throw together 40 or 50 lures with floats for around $30, and the setup is affordable and accessible to anyone. For a parent looking to take a kid fishing or start a tradition on opening day of trout season, this is the bait to have. SHOP NOW –>

Smith noted that this is their 20th year in business. “You would not believe how many lures we have sold over the years,” he told me. (Actually, I probably would believe it.) He added that even if their sales dried up, it has been quite a run and he’d be happy. I assured him that he probably wouldn’t have to worry about that anytime soon.