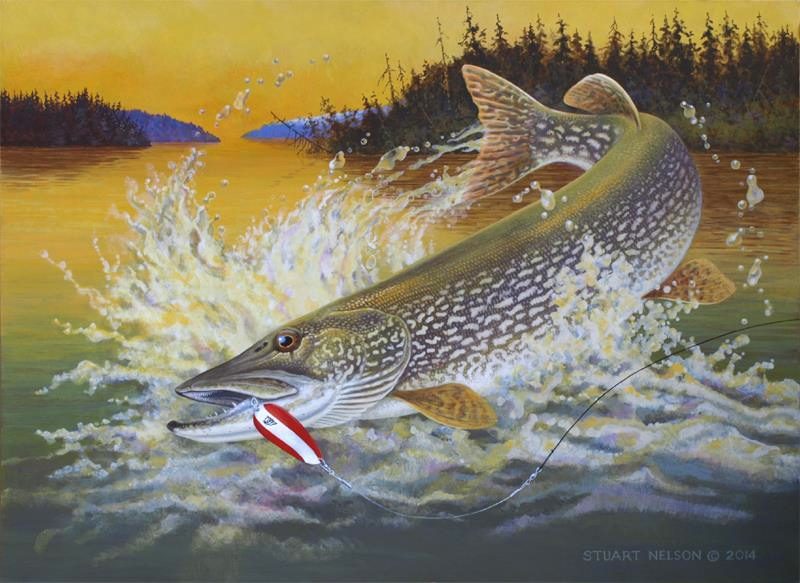 The curved red-and-white striped, concave design has been a tackle box staple for many generations

Without question, the Dardevle is one of the most popular and recognizable spoons ever created. The curved red-and-white striped, concave design has been catching fish for many generations and has been a familiar fixture in tackle boxes for almost a century. It is also one of the most copied commercial lures in angling history.

Lou J. Eppinger was born in November 1877 on the east side of Detroit. As a teenager, he served an apprenticeship in taxidermy. Upon the shop owner’s death he inherited the business at the age of 18, renaming it Eppinger Taxidermy Studio. Taxidermy being somewhat of a seasonal business, Eppinger wanted to expand and increase his year-round income. So in 1910 he began selling a small selection of fishing tackle. This was a fairly sensible pursuit at the time. Fishing was as much a means for putting food on the table as it was for recreation. Buoyed by his success, he expanded the fishing tackle side of the business and soon became a full-service outdoor sporting goods outfitter.

There are several variations of how the Dardevle was first developed. Eppinger wanted to create a perfect metal lure that would cast for distance without causing spool backlash and have swimming action incorporated into the design. Before 1910 there were few, if any, lures on the market that had these features. Early bait-casting reels didn’t have any brakes on them or serious gears, and they had very slow retrieve ratios. So Eppinger began experimenting with metal shapes and pounding out lures.

For the next several years he tweaked and reshaped his design. By 1917 he began putting the finishing touches on a hand-stamped, oblong-shaped spoon that casted well, was easy to control, and would hold up to the rigors of pike fishing. The lure was made of copper, cut and hammered to make it thick in the middle and thin on the edges. The lure made its marketing debut in Eppinger’s store in late 1917 or early 1918. Eppinger named his new lure after what he considered to be the “best fisherman” ever created, the Osprey. The Osprey lure first appeared in black and white colors and became popular very quickly, mostly by word of mouth. “You could probably win a lot of money in bars betting on that,” said John Cleveland, marketing director of Eppinger Manufacturing Co, makers of the Dardevle. “Because most people think it was red and white.” Due to popular demand, Eppinger later added additional colors and combinations including nickel, green frog, and of course the red-and-white striped version universally recognized today. “A lot of people used pork strips back in the day,” said Cleveland. “The white stripe was meant to represent a strip of pork.”

At the conclusion of World War I, Eppinger decided to change the name from Osprey to Dare Devil. This was done in honor of the US Marine 4th Brigade who in June 1918 fought valiantly at the Battle of Belleau Wood. According to the Marine Corp’s savvy public relations skills at the time, captured German soldiers were reportedly quoted as saying the US Marines had fought so fiercely that the Germans started calling them “teuful hunden,” the legendary devil dogs of northern Germany. From this the term Dare Devil was derived and used among allied forces. Eppinger however, changed the spelling to D a r d e v l e in order to appease religious sensitivities of church-going folks who might be offended by the word “devil” in print.

Eppinger was a savvy businessman who knew that the two biggest keys to success were quality craftsmanship and exposure. His ultimate goal was to have a Dardevle in every tackle box. The timing had worked out well for selling fishing tackle. Veterans from the war were returning home from overseas with money in their pockets and time on their hands. Additionally, greater affordability of the automobile expanded mobility for people in all walks of life. Eppinger bought large costly ad space in Field & Stream magazine and began working closely with well-known outdoor writers to help publicize the lure. He began publishing an annual booklet that had facts and tips both related and unrelated to the Dardevle. A clever play on words became an advertising slogan: “Cast out the ‘Devle’, catch more fish.” On the 2nd floor of the store he added a lodge for customers, business associates, writers, and sportsmen to watch outdoor films and talk all things outdoors. While in the basement of the shop manufacturing of the Dardevle rolled on.

Over the years Eppinger introduced new lures (including wooden models) and different variations to the Dardevle. Some worked out and some didn’t. In the 1930s and ‘40s, the great depression and metal shortages due to World War II hurt manufacturing and sales. But the end of the war served to reinvigorate the business for all the same reasons as in 1918. With the business again on the rise, Eppinger spent less and less time in the shop and more toward his own pursuits. He left his nephew Ed in charge, making him a partner with an agreement in place to purchase the lure manufacturing/selling side of the business. Upon Lou Eppinger’s death in 1958, Ed became president of the company. He decided to devote all his energies to lure manufacturing. Ed was a savvy marketer, even more so than his uncle. He increased advertising and expanded lure colors and combinations. “Ed is the guy that really became the marketer of the company,” said Cleveland. “He took it world-wide. He did a lot of fishing trips to northern Canada and down into Central America. He would bring writers with him. As the media developed he would bring movie camera men and do films. Then when he’d come back he would go to [fishing/hunting] club, social clubs and schools to give talks and show his fishing movies to people, particularly young people, and get them interested in fishing.” Ed Eppinger was a super-promoter. He was gregarious, enthusiastic, and likeable. “He became an icon of the fishing business,” said Cleveland. Ed became a feature attraction at outdoor shows from coast to coast. Within outdoor circles he became affectionately known as ‘Mr. Dardevle.’

It is often said that imitation is the sincerest form of flattery. But within the lure industry this often creates a big problem for the original brand; whereas copies may not quite feature the same quality and attention to detail as the original. To counteract this Eppinger started printing a devil logo on the spoons after World War II, when Japanese manufacturers began making cheap copies of the lure. “Much of our advertising at that time focused on genuine Dardevles for that reason,” said Cleveland. The Dardevle has always been thick and durable, stamped from copper or quarter-hard brass, while most of the knockoff brands were made of tin or thin steel. “All red and white spoons are essentially copies of the Dardevle,” he stated. “There’s a collector that every once in a while will call Karen [Eppinger Bustamante] and say, ‘well I’m up to’—I think he’s up to 310 or 315 copies; individual copies that he’s collected of red and white spoons.” After 1950 all Dardevles featured the devil head image. The name Dardevle was stamped on the back with either Detroit (where they were originally stamped) or Dearborn, Michigan. The oldest models are stamped ‘Osprey’.

During the 1960s the introduction of salmon to the Great Lakes gave Eppinger yet another boost. The Dardevle became a household name and a favorite among sportsmen and fishing guides. Yet the spelling still accounted for some interesting interpretations. In some areas in Canada and northern New England this classic lure is still referred to as the “Red Devil.” In other places the spelling becomes literal, pronounced ‘Dar’ Devil.

Upon Ed Eppinger’s death in 1987 the business holdings were left to his daughter Karen (Lou Eppinger’s grand-niece), who still runs the company today with the help of her daughter Jennifer and John Cleveland among others. As the heir apparent, Jennifer will someday take over the business, keeping Eppinger in the rare class of successful, family-run businesses in the country—a 100% American-manufactured success story soon to reach the century mark.

Eppinger Manufacturing Company offers countless Dardevle models, sizes, colors, and combinations: saltwater models, hammered finishes, weedless lures, fluorescent colors, glow-in-the-dark, novelty colors, and of course the iconic red and white striped classic. “The neat thing is just all the traditions that have formed because of, and around this company and the Dardevle spoons,” mused Cleveland. “Fathers, sons grandfathers and mothers have taken their kids out fishing and used Dardevles. When I work at sport shows I spend a good portion of my time just listening to people who come up and say, ‘I’ve got a great story about the Dardvle.’”