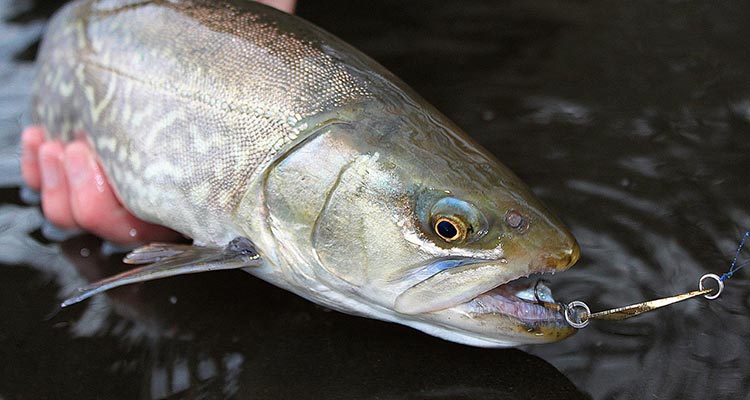 Art Lavallee was born in Providence, Rhode Island, in 1918. He grew up an avid fisherman, but like so many young Americans of his generation, his life and passions were put on hold during World War II. Upon his return to the States, Lavallee picked up right where he left off with his fishing pursuits. He was a skilled freshwater fisherman, and in 1947, he landed an 8-pound, 12-ounce largemouth bass that broke the Rhode Island state record. However, when he landed his first striped bass in salt water, he was hooked for life. Striper fishing became his foremost pursuit.

In 1949, Art and his brother Al formed the Spencer Plating Company, polishing and electroplating jewelry. Art liked to tinker with some of the pieces of jewelry, bending and changing their shapes to see if they might be made useful as fishing lures. After success with some modified creations, Art decided to enter the fishing tackle business. In 1952, he and his brother founded the Acme Tackle Company.

“Their first spoon was the Fiord,” said Kurt Kellogg, owner of Uncle Josh/Hard and Soft Lure Company, which acquired the rights to Acme Tackle in 2013. “That was the first spoon they made. Then they got hooked up with Engineering Design Associates (EDA), which is actually the firm that designed the Kastmaster.”

Initially, the lure wasn’t called Kastmaster; it had been dubbed the Splune. Acme entered a royalty agreement with EDA for the rights to manufacture and sell the lure. The Lavallees began testing and experimenting with the Splune, tweaking the design on the workbench. They modified the lure by elongating it to create a more pronounced side-to-side darting action. Then, they added a high quality, jewelry-like finish and gave it a new name. The modified design would become the most popular lure Acme ever sold, the Kastmaster.

The Kastmaster caught on quickly and was accepted by freshwater and saltwater anglers alike. One reason was that it was so easy to fish. Extremely versatile, the lure could be used with just about any technique under any condition. An angler could catch a wide variety of game fish on the Kastmaster by simply reeling it in.

“It has a very unique cut,” said Kellogg. “Those cuts at specific angles give it a unique side-to-side action.” It also casts a mile, which was an especially popular feature with shore fishermen. The Lavallees also came up with an innovative packaging concept making the lure retail-friendly in a growing market. At that time, lures were typically sold from a wallboard behind the store counter of a local mom-and-pop shop.

“They were the first metal lure company that individually packaged the lure,” said Kellogg. “They put each lure in a blister pack.”

The timing couldn’t have been better. Large department store chains were thriving, and the individually packaged lures nicely accommodated these self-serve retail businesses.

The Lavallee brothers ran the company for several decades. In 1977, Art Sr. passed away at the age of 59 and Art Jr. took over as president. In 1980, Acme acquired Seneca Tackle Company, adding more classic lures to their lineup, including the popular Lil Cleo. Art Lavallee Jr. continued to run the company until October 2013, when Uncle Josh purchased the rights to Acme Lures.

“We were really impressed by their national distribution and the quality of the lures,” said Kellogg. “At Uncle Josh, we like to think ourselves as having a portfolio of very good, quality name lures that have withstood the test of time. And Acme just fit perfectly into that.”

All of Acme’s lures are manufactured, assembled, and packaged at their plant in Providence, Rhode Island. Daily operations are still under the management and supervision of the Lavallee family.

“Because quality is so important, we kept all the manufacturing in Rhode Island,” said Kellogg. “Every supplier that was doing the job for Acme we have kept in place.”

Before acquiring Acme, Uncle Josh was a household name in its own right. “A lot of folks think of Uncle Josh as pork and soft baits,” said Kellogg. “But the brand of Uncle Josh is really multidimensional and committed to acquiring legendary, classic lures,” Kellogg explained.

The Kastmaster is machined from solid brass and is extremely durable. It can take a beating without chipping, bending, or corroding. “The thing that is unique about the Kastmaster is that it is cut out of metal bar stock,” said Kellogg. “It’s not stamped out or casted.” To accomplish this, Acme designed custom cutting machines that carve unique angles into the lure. Their precision help make the Kastmaster an effective option no matter the technique, whether casting, trolling, or jigging. The lure’s unique side-to-side darting action perfectly mimics baitfish and attracts the attention of just about all predator fish species.

The original Kastmaster is available in several hook configurations. The smaller lures (below 1 ounce) come with plain hooks or bucktail trebles. Larger models, 1 ounce and above, come in plain trebles or single bucktail hooks for easy releases. Other variations include the Kastmaster with Tubetail and the Kastmaster XL (thin-bodied).

As with many successful, timeproven designs, the Kastmaster is very heavily copied. “Absolutely,” Kellogg acknowledged. “I’d say it’s probably the most copied spoon on the market by far. But as Art Jr. would always say, ‘they’ll buy the cheap one once.’ I think what sets Acme apart is the finish. Many people might overlook this, but they really became masters of prefinishing the lures.” This high-grade, multi-stage finishing process sets the Kastmaster above its copies in both quality and performance.

Rather than relying on past success, the acquisition of Acme was done with a vision to expand and grow the product and brand. One example is the company’s desire to bring back the original Acme Fiord lure. Other examples include new enhancements planned for existing models.

“There really hasn’t been a lot of change with Acme for the last 30 to 40 years, and one of the big opportunities we see is in colors,” said Kellogg. “We have been asked by a lot of customers about expanding the colors, offering UV and glow paint. So we’re definitely looking into that right now and are going to be doing that in the future.”

Another thing they are looking at is size, said Kellogg. “Acme has always had a good reputation as a vertical jigging spoon for ice fishing, and we’re going to exploit that as well. We’re going to offer smaller sizes.”

Of course, it always helps if everyone involved in the process has a personal stake in the product and understands the job it is intended to perform. “Everyone in our company fishes,” Kellogg declared. “We are all passionate fisherman here. None of us play golf. None of us curl, for instance,” he laughed. “Whenever there is any free time, we all fish. The first question we ask when we interview anybody is, ‘Do you fish?’ Not what your grade point average was.”