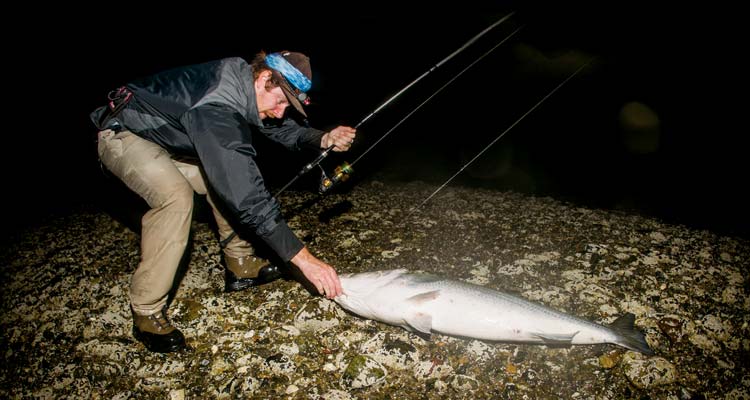 Pictured above: Mike Azevedo lands a big summer striper on the North Shore of Massachusetts.

It’s the hottest month of the summer. Water temperatures are approaching their peak in most parts of the Northeast, and in many places, striper-minded surfcasters are biding their time, waiting for the cool northwesterlies of September to usher schools of stripers south. But, perhaps August is worth a second look from anglers willing to expend some extra effort to catch the bass that quietly slip by ahead of the main migration.

While it is not a stretch to imagine bass at the northernmost part of their range hanging a U-turn this month, the truth is that stripers throughout the Northeast are getting fall-run ready during the dog days of summer.

Even in the tepid late-summer backwaters of South Jersey, I can count on an uptick in striper activity this month. This increase in action is brought on not by falling temperatures or shorter days, but by an increase in the abundance of larger baitfish. Schools of small mullet and peanut bunker begin gathering in the bays this month, and schoolie stripers feed on them noisily through the night.

On Long Island, August is regarded as a month when hard-working surfcasters have a shot at a cow cruising the Montauk surf.

The beginning of the run may be most pronounced at the Cape Cod Canal, where in recent years schools of stripers have been seen following the west tide from Cape Cod Bay to Buzzards Bay as early as the Ides of August. A decade ago, when stripers—not seals and sharks—ruled the backside beaches of the Cape, a wave of big bass would begin sliding south along the surf in the middle of August, bringing good fishing from Truro to Nauset as they moved.

Farther north, larger stripers start schooling up and moving into rocky shorelines from the North Shore of Massachusetts to Maine.

This August run is a far cry from the birds and blitzing fish mayhem of October. It happens quietly and it happens at night. The bass are attracted into the surf by the young-of-the-year baitfish concentrations that begin spilling out of the estuaries and harbors this month. This isn’t the full-scale push of peanuts and mullets moving south, but are spearing and snapper blues hanging close to the shoreline and just outside the inlets.

In New England, it’s often the biggest fish that are first to shift off their summer patterns, and as with most quality-over-quantity fishing, it can mean long stretches of little action while waiting for a small group of big fish to make its way through. Eels (both rigged and live), minnow plugs, and needlefish are staples in the New England August plug bag.

In New Jersey and western Long Island, it’s the opposite. Smaller, resident bass begin feeding in big numbers, mostly in the bays and harbors. While keeper-sized fish may be few and far between, the light-tackle action with schoolies is a great way to stay on the stripers until the migratory fish arrive from the north. Look for them around backwater structure like bridges, sedge island points, and areas where smaller creeks dump into the bay. You’ll often hear the small fish, popping on the surface as they eat spearing, small mullet, and small peanut bunker. The smaller Cotton Cordell Redfin, the 5-inch Mambo Minnow, and the Bomber B15A on slow retrieves work very well, and you’ll improve your odds by adding a teaser above the plug.