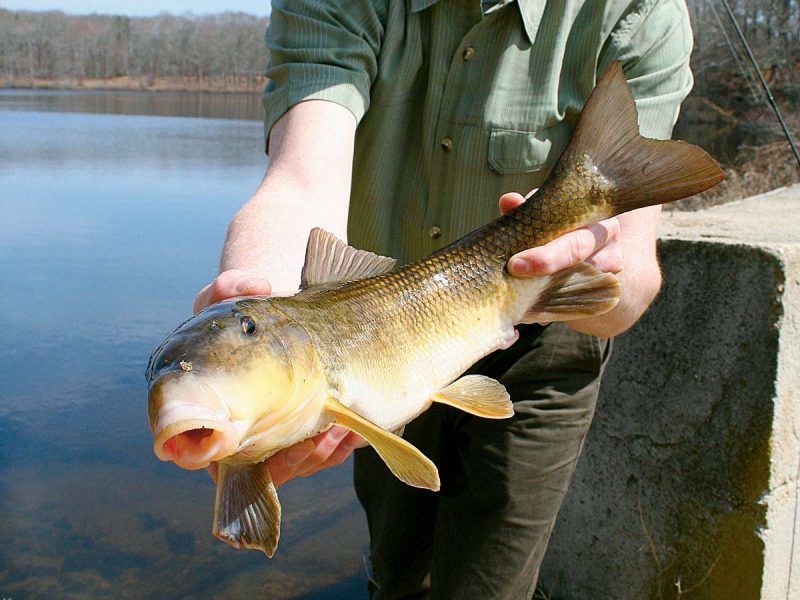 The Northeast is home to several species of sucker, all of which fall into a reviled category referred to as “rough” or “coarse” fish. Some anglers turn their noses up at this loosely classified group that also includes carp, bullheads, and chubs. But, many are aware of the hard-fighting reputation of just about every species in the bunch, and dedicate their time to catching them year after year.

Anglers will encounter redhorse and hognose suckers, but are more likely to encounter white suckers. The white sucker can grow up to 20 inches long and weigh 5 pounds, making it a formidable adversary on light or ultralight tackle.


Suckers get their names from their sucker-like mouths and fleshy lips located on the undersides of their heads for vacuuming food off the bottom. Most white suckers are a copper/brown color, and spawning males in the early spring have thick, dark stripes running down their sides.

The white sucker’s early season emergence and active feeding is not by chance. Suckers are cued by the slightest hint of snow-melt and begin preparing for the spawn. Like many other species, they require a few extra calories beforehand, which makes their spawning season the perfect time to catch them.

Finding suckers isn’t too complicated. Like many other fish inhabiting moving water systems, suckers take advantage of current breaks. Eddies, deep pools and the slack water behind logjams and downed trees all have the potential to hold fish. A set of polarized glasses and a keen eye should allow an angler to spot the tails moving in the current. If the stream or river has feeders that empty into it, the aforementioned current breaks close to these inlets are even juicier.

Such spots will hold fish year-round, but in the early spring pay attention to riffles and deeper holes below overflows and falls. Suckers will congregate in these areas starting in late fall and remain there through the winter. During the early spring, as fish attempt to move upstream for spawning, suckers can congregate just below these dams and overflows in huge numbers.

As previously mentioned, you don’t have to overcomplicate your tackle. A simple 5 1/2- to 7-foot ultralight or light spinning setup is all you need. Spool the reel with no more than 6-pound test. A slip sinker rig with a 1/8- to 1/4-ounce egg sinker is the preferable set-up, but adding one or two split shots a foot or so above the hook will also work. Use a size 6 baitholder.

The bait of choice is almost always small pieces of garden worms or night crawlers. Fished off the bottom, suckers can easily find and devour these tender morsels. Smaller pieces will be easier for suckers to swallow and will improve hook-up ratios, but don’t shy away from putting whole worms on to score bigger fish. I’ve caught huge suckers that took down dead shiners, so be creative.

For an added punch to your sucker rig, take a lesson from carp anglers and add some “pack bait” to your rig. This type of bait consists of different combinations of bread, flour, oats or other grains. The recipes vary by angler, but each is mixed into a moldable dough and packed around a sinker. The loosely packed bait will dissolve in the water, creating a pile of chum.

This methodology can be put to use if you want to increase your sucker catch. A basic pack bait can be as easy as taking several slices of white bread, crust and all, blending them unto crumbs, and adding a tiny bit of whole kernel corn. Find the right combination until you get a consistency that can easily mold around your sinker, but don’t pack it too tight or it won’t dissolve in the water. This added attractant will get the attention of more fish.

Suckers on the fly? You bet. A 6- or 7-weight will ensure you can handle some of the bigger specimens, and you’ll need enough spool capacity for a sucker’s long runs. Leaders should be around 10-pound test and 7 feet long.

When choosing a pattern, use a fly that sinks quickly and resembles the suckers’ natural food. Patterns that match scuds, nymphs and worms are good bets. Hooks should be small enough to fit into a sucker’s mouth, but strong enough to hold up to these surprisingly powerful fish. When water conditions are clear, use small flies; when it’s muddy, scale up for a bigger presentation.

Fly-fishing for suckers is a sight-fishing game and requires patience. Once you locate a school of fish, be aware of your movements and your shadow so you don’t spook it. Make sure you cast well upstream of the school so that the fly reaches the bottom before it gets to the fish. If your fly is not on the bottom, chances are the fish are not going to eat it. Be persistent, as it can take several passes before a sucker may come out and grabs it.

Yet another surprising fact about suckers is that they’re quite tasty. Believe it or not, deep-fried sucker is a delicacy for those in the know. You’ll want to start by scaling and fileting the fish, but do not remove the skin. Place it skin-side down, make crosswise cuts, add a little seasoning and some panko breadcrumbs, and it’s ready for the fryer. Allow the filets to brown after they float so that the hot oil has more time to render the tiny bones—you won’t even notice they’re there.
Now you’ve found a way to not only bend the rod with a solid-fighting fish to beat cabin fever, but you’ve got dinner as well.