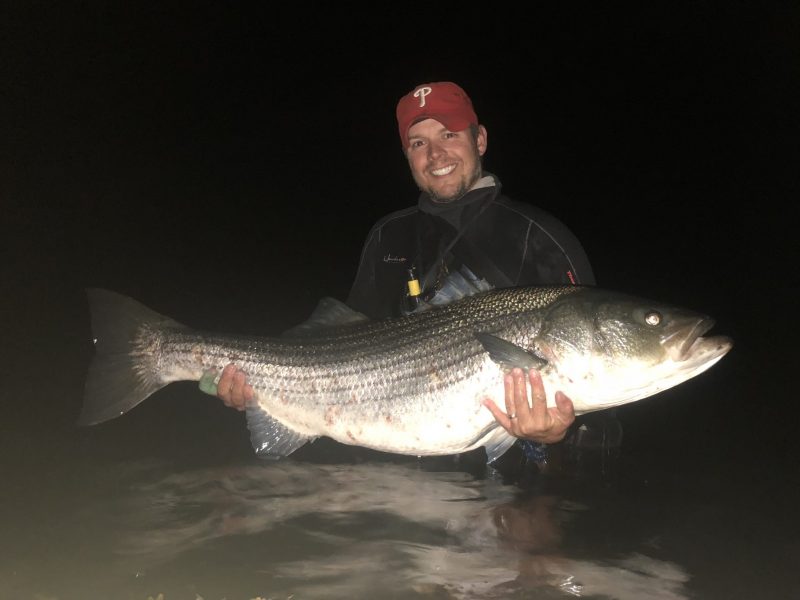 As most large striped bass ascend rivers to spawn this month, surf-fishermen eager to catch them are buzzing about the new striped bass regulations. As of this winter, a slot limit has come to the striper fishery.

Striper fishermen won’t be the first saltwater anglers faced with a slot limit. Most southeastern states have slot limits for red drum that allows fishermen to keep fish between 18 and 27 inches. Even New Jersey, with its infrequent red drum visitations, has such a limit. (In Rhode Island and Massachusetts, where a handful of large red drum were caught and kept in recent years, no slot limit exists.)

In Florida, snook between 27 and 34 inches may be kept, and only during two relatively short open seasons.

It seems to have worked for those species. Big red drum and large snook abound in parts of their range, and fishermen travel from around the world to catch them.

But will it work for stripers?

A Slot Limit vs. A Higher Minimum Size

Back in October, when a range of size limits were being explored for stripers, I wrote my letter to the Atlantic States Marine Fisheries Commission in support of a 1-fish bag limit and a 35-inch minimum size.

I had several reasons. First, I favored a limit that allowed stripers to spawn several times before “entering the fishery.” I also somewhat agreed with the fishermen who supported this option because it “worked before.” This referenced the downturn in the striper population in the 1980s, when the minimum size was incrementally increased to 36 inches to protect the female fish of the 1982 year-class until 95% of them had spawned at least once.

We can debate whether factors like river conditions and weather have the greatest impact on the success of a striped bass spawn in a given spring, but an option that would protect the large 2015 year-class until they are nearly 20 pounds appealed to me very much. I thought of the massive number of schoolies around the past few falls and imagined them returning in those same numbers year after year until our fall blitzes were once again made up of 15-pounders, not 15-inchers.

It wouldn’t be that simple, of course. According to the stock assessment, fish that died after being caught and released made up 48% of all stripers that died in 2017.  This was hard to swallow for catch-and-release striper fishermen. Some didn’t believe it and continued to place all the blame on commercial and catch-and-keep fishermen. But many accepted it and vowed to take better care of their stripers this season when letting them go.

The 35-inch minimum size was shut down in favor of the slot limit, but I’m not disappointed. I’m happy the larger stripers will be protected (from recreational interests, at least) once they grow out of the slot. I’m interested to see how (or if) it affects the quality of our striper fishing over the next few seasons. I’m also interested in how it will affect our striper fishing culture.

Since long before I ever cast into the surf, 50 pounds has been the mark for striper fishermen. It strikes the perfect balance of rare but attainable, and hundreds (if not thousands) of surf fishermen travel the Northeast spending money, straining relationships, and sacrificing sleep in the pursuit of a striper that size.

For a fisherman who pursues snook and redfish, there’s no “mark” comparable to the striper fisherman’s 50 pounds. Is this the result of the slot limits in place for those species? And, if yes, will 50 pounds still be the mark for stripers if it’s no longer legal to hang a striper that size from a tackle shop scale?

While I have caught and released all but a few mortally wounded stripers over the past two decades of targeting them, I still weighed large stripers on my Boga Grip. These portable scales are widely accepted as adequate measurement tools among anglers, but the hard facts about striped bass release mortality have made me question if that’s in the best interest of the fish. Even when harvesting large bass was legal, fishermen on social media were quick to condemn the photos of vertically held stripers. Many claimed that forcing a bass to support its full weight from the lower lip caused internal damage to the fish.

And, is the weight of a live striped bass even the best sign of its quality?

Live weights are highly variable due to a fish’s stomach contents at the time of the catch. I once had a high-40-pound striper upchuck a few full-sized scup as I was about to land it. Those big baitfish could have been the difference between a 50 and the 40 I recorded in my log instead.

OTW’s editor-in-chief, Kevin Blinkoff, is fond of saying that if we truly wanted to measure the quality of a catch, we’d weigh the fillets, since that’s the part we actually eat, and therefore hold the greatest value.  Of course, that’s problematic to the catch-and-release fishermen, and for stripers above a certain size, illegal under the current regulations.

Does that mean length is the true measure of success? Is 50 inches the new 50 pounds?  I don’t think so. I’ve seen 48-inchers weigh 51 pounds and 48-inchers weigh 35 pounds. These fish were not equal.

My impression has always been that once stripers reach a certain size, they stop adding inches and start adding pounds, so catching a heavier fish of the same length meant I’d outwitted an older, wiser fish, which made me feel like a superior fisherman. So, does that mean that age is the true measure of striper success? Should I be taking scale samples from my stripers and counting the rings to determine their ages?

The only thing I know for sure is that the striped bass fishery—and the culture surrounding it—is changing. I’m hopeful that these changes are for the better so that a few years down the road, we can all catch more big stripers, no matter how we measure them.

What are your thoughts on the new regulations? How will you be changing your approach to striped bass fishing this season? Let us know in the comments below.