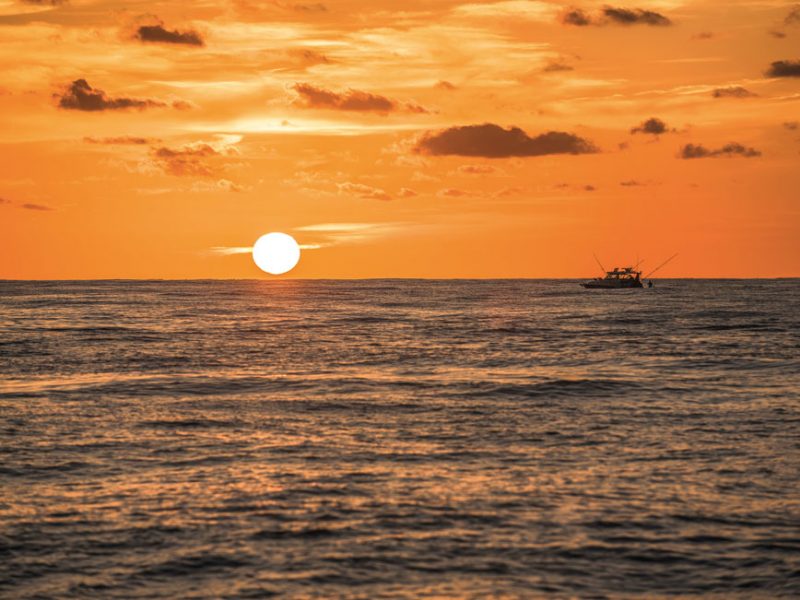 We are in the prime offshore fishing season. Long runs to the grounds are the norm during the warm summer months. No matter how big or fast your boat, the open ocean will inevitably surprise you.

During my 25 years of offshore trips, I have learned to slow down, enjoy the journey, and not worry about arriving at the destination on schedule. Offshore fishing should be fun. Take your time, and remember that catching fish is only one part of the experience.

For many fishermen, their first experience with an offshore trip is a 12-hour day on a boat and a 50- to 60-mile journey. Typically, you are up hours before dawn, steaming in half light to arrive at your destination at an intended hour with a plan to fish 6 to 8 hours and then race back before dark.

When I started offshore fishing out of Falmouth, Massachusetts, the destination was the goal, whether it was the Northwest Corner of the Dump, the BC Buoy, or the Regal Sword. We charged out as fast as possible, insistent that the boat run at optimal cruise speed so we could get to our destination as planned.

Looking back 25 years to a different time and fishery, I can only imagine how many fish we overran in those races to our destinations. I remember constantly being cold, wet, and beat up, and I remember things breaking from pushing boats faster than the conditions allowed. In my late 30s and early 40s, I reveled in the perceived toughness of offshore fishing and accepted the pounding to the boat, the crew, and me as a rite of passage. Over time, as both bodies and boats broke down, I started to use my brain to turn trips from pounding races into successful cruises.

Here is an example from my logs. In 2005, I ran my 28 Carolina Classic directly to the shipping lanes south of Martha’s Vineyard in what I logged as a 3- to 5-foot sea and 15 to 20 mph southwest wind. It took 3¾ hours to go 70 miles. I could barely stay on plane the entire way, and things banged and rattled on the boat the entire trip. I logged one small yellowfin on that trip, the seas were not trollable, and both crewmembers were seasick and effectively useless. We turned for home two hours after we started fishing and the wind died out by the time we got back to the dock. That trip was a waste of time, energy, and fuel.

Three years later, I found myself in the same boat with the same conditions. This time, I left two hours earlier at 2:30 a.m., steamed at a slow 16 knots, and timed my egress through Muskeget Channel at slack tide. Two other bigger boats left two hours later at first light, and both turned back because Muskeget was unpassable with the tide running. We stayed on that 16-knot pace for a couple of hours as we made our way south. Due to sea conditions, I dropped to a 7-knot trolling speed 20 miles north of where I wanted to be and planned for three hours trolling south toward our target. We never made it because 10 miles north of the planned destination we started catching big yellowfin! A few hours later, the seas had subsided, and we got a bonus treat of a blue marlin encounter.

I can tell you similar stories of day trips to the east, being pounded in seas to get to a destination to find it devoid of life and, surprise, on the way in at the end of the day, encountering crashing bluefin in 80 feet of water. The destination is not always the answer. Keep your eyes open on long offshore trips; it might save you time and fuel and mean you catch more fish.

Here is a good day-trip tip, especially if you’re navigating Pollack Rip, Muskeget Channel, Vineyard or Nantucket sounds, or Buzzards Bay. Time your return trip home to take advantage of slack tide. As most boaters know, a steamy southwest breeze builds up in these areas on hot summer afternoons. I do what I can to avoid heading west through these areas when the wind is going against the tide. Plan your trip home around slack and your crew will thank you for it.

I have probably made over 150 canyon runs as a captain in the last 20 years. When I was younger, I felt both more energetic and invincible, and I made many 18-hour canyon “day trips,” leaving in the dark and returning exhausted at last light. I remember a few good day trips in those early years, but often it was a lot of boating, some fishing, and only a few moments of catching along the way.

On one trip, after the second “thunk” in the dark, I started to realize the dangers of steaming at speed at night. My invincibility cloak fell apart as I heard stories of boats hitting something or catching a line in the dark. Each summer, there were one or two very scary stories of things that went “thunk” in the night.

I turned into an overnight canyon fisherman, leaving mid-morning and reaching my destination mid-afternoon. We enjoyed a long afternoon and evening troll, spent the night drift fishing, and then had a morning troll before leaving by 11 a.m. and getting back at the dock by 3. This was a safer approach since the passages at speed were done by day, dramatically reducing the risk of hitting something. That said, I still occasionally get a good scare from a semi-submerged rope, log, or pallet. I’ve also found myself frustrated by missing a morning bite and arriving mid-afternoon to calm seas and quiet fishing. While there are no certainties in canyon fishing, my experience is that we catch the bulk of our trolled fish within two hours of sunrise or sunset.

Over time, I started listening to seasoned offshore mariners, especially commercial canyon fishermen who typically made 20 to 30 trips a year. What stuck in my head was the approach they took to a 100-mile passage. It was done at slow “hull speed” at night, the crew rotating 2- to 4-hour shifts at the helm while everyone else slept below. Hull speed of 8 to 12 knots will not stop a boat from hitting something in the dark, but at that slower speed it dramatically reduces the chance that a hull strike will be a catastrophic event. These fishermen also pointed out the advantage of arriving on the edge at dawn to give you an extra morning troll, increasing your odds of success. These ideas resonated in me over time, and I modified my canyon trips to make a slow night passage out, increasing my fishing time while also arriving at my destination with a rested crew.

My current approach to canyon fishing is one I have been using for three seasons. It is a 40- to 48-hour-duration trip with a slow overnight passage on the way out followed by 30 to 36 hours of fishing time before returning home at normal cruise speed in the late afternoon of the second day. I try to get my crew at the dock an hour and a half before sunset and get the boat off the dock at least an hour before sunset. That gives me 2 hours of light to steam at cruise speed. At last light, I’ll drop down from 20 knots to 8 knots, which drops my fuel burn from 19 to 3 gallons per hour. We throw out two lures, light the barbeque, and enjoy a dinner on the water. This timing typically gives us a good last-light troll through prime 20- to 30-fathom bluefin waters. More than once, we trolled through breaking bluefin and started our trip with a fish in the box 60 miles from our targeted destination. There’s nothing like a double bluefin knockdown with steaks grilling!

Once we lose light, I point the boat toward our canyon target, figuring out a time and distance calculation to put us at 400 feet at first light. No matter the distance to go, I don’t run more than 10 knots in the dark. I feel comfortable that a hull strike at that speed won’t sink us, and it’s easy to sleep when the boat is running at displacement speed. I set up a crew rotation with 2 or 3 others: 2 hours on, 4 hours off. I let someone take the easy first shift and ask to be awakened about midnight. I get a nice 2-hour nap, take over the helm until we are through the shipping lanes, and then hand off to the next crew member while I get a second 2-hour nap. We always have two lures out during the entire trip to our destination. We picked up a couple of yellowfin tuna and lost one mystery fish in the last two years during the night chug!

I typically wake up at first light by hearing lures going into the water. It’s 4:30 a.m., we are in a prime location a few miles off the edge, I am rested, the crew is rested, and we have a full day of fishing in front of us. Being at the edge at dawn gives us the entire day to fish and the flexibility to adapt to conditions as needed. We can move to another canyon on the troll, we can head out to the deep and try for swordfish, we can pot-hop for mahi and tilefish, or we can just troll all day long. We typically mix things up, trolling for 4 or 5 hours, deep-dropping until 4 p.m., and then run back to the fishiest location in 800 to 1000 feet and set up for the evening troll. With the long day, my crew and I grab a nap at some point when it’s slow, banking rest for the evening and night ahead. We grill an early dinner while deep-dropping or tilefishing. I have learned the hard way that grilling at dusk in the canyons is a recipe for disaster when a wolfpack strikes!

We also fish hard overnight. I set up the same rotation: 2 to 3 hours on deck and then sleeping so everyone gets 4 to 5 hours of rest. I usually find myself alone for a couple hours at 2 a.m. while everyone else is sleeping, which is just how I like it. I get my rest during the pre-dawn and dawn troll while the overnight sleeping beauties take over the boat.

That second day, we do a morning troll and then finish up the trip with either a couple hours of deep-dropping for swordfish or tilefishing in 600 feet. I plan my return to be back at the dock by 5 p.m. Everyone gets at least an hour nap on the way home, and some of my professional sleepers can manage four solid hours.

The end result is that everyone on board, including me, gets at least 5 or 6 hours of sleep on both nights of the trip. We make the long outbound journey at a safe speed and get a solid 30 to 36 hours of canyon fishing, optimizing our chances of a great trip. I also like the fact that no one has to do a 2 a.m. drive to get to the boat for an early morning departure, nor do they have to do an 8 p.m. drive home after a long trip.

The overnight slow chug isn’t for everyone. You need the right boat, the right crew, and the right attitude to make it a success. My intention is not to convince you this is the best way to go to the canyons, but to plant the idea in your head so that at some point you might give it a try.