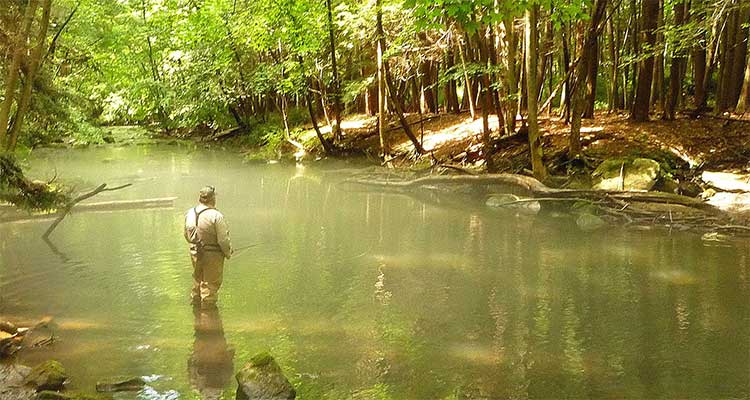 When most anglers think of fly fishing in New York State, they usually think of fishing the great rivers of the Catskills or the Adirondacks. I, however, live in Manhattan and don’t own a car, so when I think of fly fishing, I also think of the beautiful streams of Northern Westchester. Most of the streams connect the 12 reservoirs of the Croton Watershed. The Watershed is a combined 63,000 acres and, since 1842, has provided New York City with drinking water, and is therefore under the management of the city’s Department of Environmental Protection.

The Croton Watershed supply system was completed over a hundred years ago. It is stunningly beautiful, especially the intimate streams, which offer some of the best fly fishing in the Northeast. One such stream is the Titicus River (often called the Titicus Reservoir Outlet). The stream connects the Titicus and Muscoot reservoirs and is about a ½-mile long and, in most stretches, about 30 feet wide. Its flow is consistent and fairly slow. Luckily, the Titicus flows out of the bottom of a dam, so even during the dog days of summer, its temperature is about 54 degrees. Presently the stream is a kill river. (New York is considering changing it to no-kill.) Anglers can take up to five trout a day, so by June fishing becomes more challenging and, yes, often discouraging, especially because most of the trout left are wild, having been born in the stream, which makes them far more difficult to fool.

The stream is stocked each spring with about 400 rainbows and 100 browns. In the fall wild trout swim in from the Muscoot to spawn. Some of these fish hold over all year. The stream also holds wild crappie and perch.

The Titicus is made up of two very different sections, an upper and a lower, divided by the bridge on Route 22.

The upper section is about 2 to 3 feet deep. There is access in two places, the first just upstream of the bridge. You can park your car directly across the road near the clothing drops. This access point, however, will take you only to Bridge Pool. The second access point is about two hundred yards upstream, right in the middle of the small parking area on the north side of Titicus River Road. Follow the path down the hill, then upstream.

Regulations prohibit fishing upstream of the posted sign on the north bank – about 300 feet below the dam – so the first water we can fish is the pocket water above what I call the Little Falls. Below the falls, the stream is a series of small pools – including a bend – and long runs. One run, Boulder Run, offers excellent pocket water. The bottom of the stream is rocky, even in the smooth pools, so fish can hold seemingly anywhere.

The lower section of the Titicus begins as a gentle S-curve, and then becomes a long slow pool with some deep holes. You’ll have to wade here, so you’ll need a wading staff.

You’ll find access to this section of the river on the east end of the ballfield along Route 22, where there is also additional parking. Just watch for thorns as you make your way through the trees and bushes.

If you want to fish the stretch of river above the interstate, follow the path along the metal fence. Because this stretch has a lot of tall plants, when I fish streamers here I slightly bend the hooks up and back.

The banks are steep in most of the lower section. If you wade upstream, you’ll have an easy exit point on your left, then on both banks near the twin islands.

Stealth is the way to go. Don’t wear bright clothing, keep your profile low, and try not to cast the line over the fish, as it can spook them. If, however, a trout is suspended high in the water and therefore has a small window of visibility, I often move my fly line on the water so that my fly drifts right toward the fish.

To roll cast farther, hold the line against the rod handle with your index finger, and begin the forward cast just before the fly stops moving and the D-loop starts to collapse. When you abruptly stop the rod, let go of the line. If you’re fishing across two different currents add slack to the line so that your fly drifts drag-free. To do this, make stack mends, which are really mini-roll casts.

Wherever possible, I don’t wade. Instead, I stand near the bank or just below the tail of a pool and make longer and longer casts. Because of the tight quarters, roll casting is a must on the Titicus. Also, roll casting will keep my tandem flies or my indicator and split shot from tangling.

And of course, I always fish the current seams.

One of the most popular tactics on the Titicus is fishing a caddis and a small nymph or an emerger on a thin dropper. If I see a gentle rise, I drift my unweighted nymph or emerger just upstream of the rise, then gently lift my fly rod and wait a few seconds.

If I want to fish a nymph on the bottom, I’ll place split shot(s) about eight inches above my fly (just above my tippet knot) and then fish across and down; that way if I get hooked up on the rocky bottom, I simply lift my fly rod up and back. If I get a strike, I set the hook by sweeping my fly rod back and parallel to the water. To minimize drag, I use a moveable yarn indicator. To suspend my nymph off the bottom I use a foam or a balloon indicator.

Besides dead-drifting nymphs, I fish them on tight lines without an indicator and give them movement by twitching my fly rod up and down.

To fish the pocket water, I use two tactics. I cast a streamer upstream of a big boulder and then twitch the fly downstream and into a pocket, or I smack my streamer into a pocket and hope for a reaction strike.

They are very sporadic and, due to weather, irregular, so matching the hatch is often a guessing game. Because of the canopy of overhanging spruce and hemlock trees, many traditional evening hatches take place during midday. Here are some principal hatches: blue-winged olives from late April through mid May, sulphurs from late May through June, brown and gray tricos and small blue-winged olives from July through September, and small and large caddisflies throughout the season.

When there are no hatches, I’ll fish ants and streamers, and in the faster water, searching nymphs, about size 14 Pheasant Tails, Hare’s Ears and Caddis Pupas. In the slower water, trout, I believe, will be more selective and prefer smaller flies, especially later in the season. (Smaller flies struggle longer to break through the surface film.) Often, when I see trout rising to what seems to be an invisible hatch, I’ll tie on a small midge, such as a size 24 WD-40 emerger.

Because of the low light on the Titicus, I find it very helpful to use a threader. (You can even buy a cheap one used for sewing.) If I don’t have a threader, I’ll hold the fly on its side between my thumb and finger with just the eye showing; that way the tips of my finger and thumb will guide my tippet through the eye. Also, to save me a lot of time changing flies, I’ll pre-tie small flies to tippets that have a loop-to-loop connector.

To drive to the Titicus, take Interstate 684 to exit 7. At the top of the ramp, turn right and drive past the second traffic light and you’ll be on Titicus River Road. (Just south of the light is Swan’s deli, where you can get a hot meal.)

If you’re going by train, get off at the Purdy’s station, walk north through the parking lot, and then up the metal steps and turn right.

And remember, another beauty of fishing the Titicus is that you’re so close to the East and West Branches of the Croton. You can hop back on the train and ride north one stop, or you can drive about two miles north on Route 22.

For fishing the Titicus, you’ll need an 8- foot, 3- to 5-weight rod, a New York State Fishing License and a free New York City DEP Watershed permit. You can obtain a resident or quest permit at: www.nyc.gov/html/dep/html/watershed_protection/access.shtml.

The river is open from April 1st to October 15th. For further information you can contact the Bedford Sportsman at 914-666-8091, and purchase Trout Unlimited’s Fly Fishing the Croton Watershed. On the web you can go to www.trout-streams.com.

There are times when I don’t see a soul on the Titicus and have it all to myself, and though I cherish those times, I don’t cherish them as much as when, because of the Titicus’s small size, I cross paths with other anglers and exchange fly fishing know-how. Often, as the season flows on, I’ll see some of those anglers again and again, and I’ll be reminded that it’s not just reservoirs that are connected, but anglers as well. So I guess what brings me back to the Titicus is not just the challenge of catching wild trout on a small stream but also the knowledge that friendships, as well as insects, hatch there.