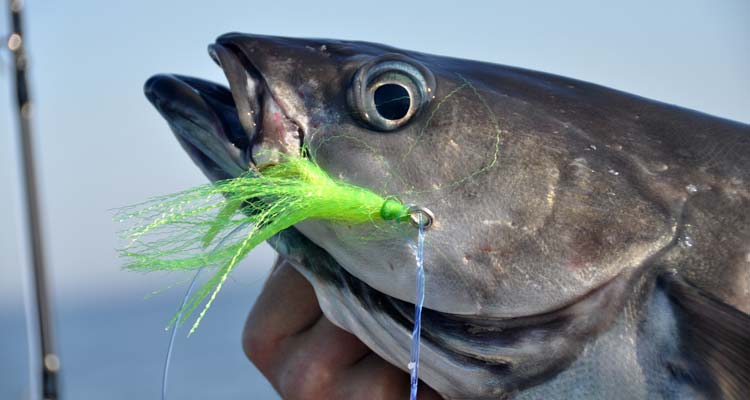 In the Gulf of Maine, late autumn and early winter are typically the hottest months for pollock action.

Nicknamed “Boston bluefish,” pollock are not truly groundfish, as they often school up well off the sea floor in pursuit of herring, mackerel, sand eels, squid and other forage species. During most winters, pollock feed with profound aggressiveness until sometime in late January, when acres of baitfish become harder to locate or travel to areas beyond reasonable target range. Until that time, however, rugged anglers who just can’t stay away can use good weather windows as an opportunity to tussle with bruiser pollock.

The number of boats sailing to places like Jeffreys Ledge and Platts Bank declines precipitously as the weather cools and the winds intensify. Further, only a select few captains venture to the 600- to 800-foot drop-offs in pursuit of white hake. As the season wanes, the action turns almost exclusively to pollock.

Bait rigs can be tucked away this time of year. Late-season pollock fishing in the Gulf of Maine is a jigging activity. My standard weapon of choice is the 16-ounce, un-plated Lav Jig. I am particularly fond of using swivels at both ends of the jig. I have not detected a difference in production whether using a chrome-plated or un-plated jig, but I have seen these jigs out-fish others that lack double swivels. I like to place a squid skirt over the treble hook and, while I have had great success with it, I have seen plenty of big pollock taken without it. Norwegian stainless jigs, Angerman Jigs, and Crippled Herring are also very popular and will work well.

Teasers or flies are highly productive, will provoke lots of strikes and can at times out-fish a jig. There is a fairly notable contingency of seasoned anglers and captains, however, who are vehemently against the use of them. Pollock are powerful fish that fight hard and cannot be put in the same class as cod, hake, cusk and other species that are true groundfish. Pollock are far and away the most pelagic of the clan. When you hook up with a pair of 15-plus-pound fish, you run the risk of busting one or both off as they swim in opposite directions and aggressively shake their heads. Busting a fish off here or there is part of the activity, but the chance that it could be a trophy or at the very least a good candidate for the pool is enough to preclude teasers from some anglers’ boxes. I have caught droves of pollock (as well as cod and haddock) on teasers and adore the opportunity of catching a double, so I am an advocate of using them unless it is clear I am over a school of particularly big fish. I do understand the other side of the issue, though, as I have seen others fall victim to a big double hook-up and have even experienced it myself. Ultimately in my view, the upside outweighs the drawbacks.

Most commercially-made teasers are constructed from nylon. Nylon does not have a natural flow in the water, so I recommend seeking out bucktail teasers. Bucktail, in conjunction with a small amount of Flashabou, will at times provoke more strikes than nylon teasers. But finding commercially tied bucktail flies for groundfishing can be challenging, and it is easy to run through 4 to 6 of them in a full day of fishing. You can make teasers for a small fraction of the cost by purchasing bucktail, Flashabou, hooks, swivels, thread, a bobbin, head cement and a small fly-tying vise. I use a standard hobby vise and make a bunch at the same time while watching a football game on a rough weather day. When the teasers get chewed up, you only lose a couple cents worth of bucktail since you can re-tie the hook. You do not need to be a fly-tier to make these; in fact, fly fishermen would hardly call this fly-tying. Nonetheless, it is nice to catch fish on something you constructed.

The actual techniques associated with jigging are rather elementary. Either cast out, crank up a few turns and sweep the rod tip up and down, or cast out and crank the jig through the schooled-up fish. There are a few finite details that can enhance productivity. Recognizing current and tide, for example, are very important. If the current is ripping from stern to bow, cast as far as possible toward the bow. This will allow you a minute or two of vertical jigging before the jig starts being swept astern. If I am not sure how the lines will tend, I wait about 30 seconds and allow everyone else to toss their lines out first. When casting, be sure to angle the jig so that you are not crossing lines. Tangles eat up time and result in fewer fish, so if your jig is being swept too fast, tie on a slightly heavier slab of metal. Maximizing vertical jigging means less time resetting and more time in the strike zone. Resetting is another key detail. Far too many anglers keep on jigging when their lines have been swept under the boat, far out in front of them or toward the bow or stern. Once you are slightly off the vertical plane, crank up quickly and do it again. If you allow the jig to drift too far away, you will have a difficult time tending bottom and you will invariably end up in a tangle with three or four other lines.

Penn’s Baja Special 113HN and Daiwa’s Saltiga SA40 are highly capable of handling 14- to 20-ounce jigs. Spool the reel with 50- to 65-pound-test braided line and don’t skimp. It is fine to use some backing, but ensure you are not leaving much daylight on the spool. When currents are ripping and you’re fishing in 400-foot-plus depths, long casts in the opposite direction of the current are essential. If your spool is half-filled, you’ll be adding additional friction when casting and reducing distance. Use a uni-to-uni or an Albright knot to attach at least 20 feet of 50-pound-test monofilament as your leader. It’s important to have a lengthy leader because you’ll be banging up against all sorts of rocks and other obstructions that can slice through the thin diameter of braid. It also eliminates the need to tie on a new leader if the bottom gets a bit chewed up and warrants a re-tie.

There tends to be a bit more variety with rod selection, but in general a 7- to 8-foot graphite or glass blank with enough backbone to handle the hefty jigs and fish up to 40 pounds is necessary.

Once a fish is hooked, haul it up with the reel, not the rod. An angler who points the rod tip toward the water, keeps it as still as possible and cranks steadily loses far fewer fish than an angler who pumps the rod as though he was fighting a wahoo.

While vessels tend to be conservative in determining whether or not to sail later in the season, expect to deal with at least moderate conditions with some cold sea spray. Even on nice late fall outings, proper attire is critical. Layering is unquestionably the appropriate way to dress. The outer layer, which is the most important, should be entirely waterproof. A commercial-style rain jacket and lined waterproof boots are appropriate. With sea spray hitting you and an on-board hose that rarely shuts off, you will likely get wet. Also of utmost importance is a pair of waterproof commercial fishing gloves, which make handling ice-cold fish more palatable while protecting your hands from dorsal fins and sharp gill rakers.

The air may be a bit brisk in October, November and December, and the seas a little choppy, but those thoughts quickly get erased when rods start bending and big pollock and hake are hauled aboard. As an added bonus, it’s relatively common to see whales, dolphins and large bluefin tuna during October and into November as they gorge before the onset of winter. Despite the nippy conditions, it’s a beautiful and often very rewarding time of year to be out on the Gulf of Maine.