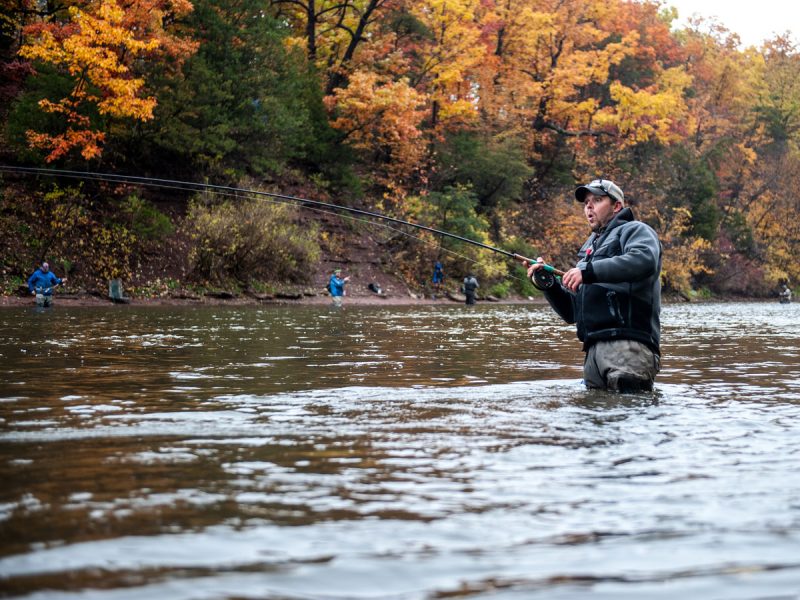 Pictured above: Jimmy Fee tries not to panic while learning the right amount of pressure to apply to a fired-up steelhead.

Every summer when I was growing up, my dad and I visited Pulaski, New York, to troll for salmon on Lake Ontario. He told me stories about the crazy salmon runs on the nearby Salmon River, but it wasn’t until my junior year in college that I learned of the steelhead run.

In February 2006, I was browsing some local fishing websites when I clicked on an out-of-state report and started seeing pictures of massive steelhead from upstate New York. I couldn’t believe that these amazing fish were being caught in the middle of winter in New York. Until then, I thought the only fishing happening in the winter was through the ice.

I called my dad, since I always asked him for advice first, and asked, “So, how do I fish for steelhead?”

He replied, “I have no clue.” He then started telling me about the salmon run and how, back in the day, people snagged the fish with large, weighted treble hooks. He emphasized that it was very dangerous; people lost eyes and nearly got killed from flying hooks and sinkers. Despite the gruesome stories, I needed to learn more, so I started digging deeper.

A year later, I went north in search of my first steelhead in the river. It was late February 2007, and I was equipped with a 9-foot, 7-weight fly rod and a 6-foot medium-heavy spinning rod with a 4000-size reel spooled up with 30-pound-test braid. I had no clue where to go or how to fish for steelhead, but I chose a spot where I knew the salmon stacked up pretty well and figured it was a good place to start. At this particular spot, there was a nearby tree that created a very deep, slow-moving pocket, but it had a steady-moving current with a fairly constant speed. I figured this might be a place where steelhead would sit and conserve their energy. I took three casts with my fly rod, and hooked into an 8-pound hen steelhead. After a short tussle with the fish, I was able to land her, then looked over at my buddy, Justin, and told him this is going to be easy.

I was mistaken. That must have been the only fish in that hole because we fished for three more hours without a bite, then we spent the next two days without hooking another fish.

The next week, I returned to the river by myself. I was determined to figure out the fishery, and I wasn’t going home until I learned so I started watching some of the other fisherman. I saw one guy hooking up nearly every cast and noticed he was using a much different setup than I had ever seen before. He had what appeared to be a fly reel with monofilament on it, a 13-foot rod, and a bobber. I said to myself, “What grown man fishes with a bobber?”

I went up to him after he caught his fifth fish on his eighth cast and asked him what he was doing to catch them. That was when I was introduced to the centerpin.

The fisherman showed me how it worked and why it was effective. I understood the concept of centerpinning as it related to nymphing when fly fishing, so I positioned myself just below him and tried to recreate a similar drift with my fly rod. After 45 minutes of nothing, while watching the centerpinner catch four more fish, I tried doing the same thing with my 6-foot ultralight spinning rod. I fished the rest of the day without a single bite. I was beyond frustrated.

That night, I went back to my hotel defeated. I was outside having a beer when I was greeted by a neighbor who was a little intoxicated. The man said he was a guide on the river and had crushed the steelhead earlier that day. After struggling for the past two days and on my previous two-day trip, I was willing to take advice from anywhere, so I offered him a beer, cracked one for myself, and we started talking fishing.

His name was Rob Clark, but he went by “Frenchy.” He told me that he’d fished the Salmon River for more than 15 years at that point, and was one of the first people to start centerpinning on it. He caught my attention right away when he said he used a centerpin. We talked fishing for hours, and the only reason why we stopped was that we killed the 12 pack. At the end of the night, Frenchy asked me if I wanted to join him on the river the next day since he didn’t have any clients. I said, “Of course!”

The next morning, our hangovers resulted in a late start, but Frenchy was still very confident that we would catch fish. We walked down to the first spot, and he took out the spinning rods so I could get used to float fishing. Each setup was a 10-foot noodle rod with a 4000-size reel filled with 12-pound-test monofilament. At the top of the line, there was an 8-gram river float. Below it was a “shot line,” a 6-foot length of 8-pound test, followed by 2½ feet of 5-pound test with an 8mm bead and a size 10 hook.

Frenchy demonstrated the technique by casting out and allowing the current to move the float downriver unencumbered. It was floating for less than 15 seconds when it dropped and Rob was tight to a 7-pound steelhead. He stressed how important it was to drift the float as naturally as possible. “If you’re going too fast, check it and slow it down. If there is too much slack in the line and it is affecting your drift, mend the line and get that float back upright.”

I told him I was ready, and roughly five casts later, I was locked up with a steelhead. I lost that fish, but four casts later, I hooked up and landed a 5-pound steelhead. In a span of 15 minutes, I had hooked more fish than in my previous four days of fishing.

Halfway through the trip, I asked Frenchy if I could try the centerpin for a little. It took me 35 minutes to get the gist of casting, but as soon as I got it I was hooked on the technique. Immediately, I could tell this was a lot different than fly-fishing or using a spinning rod. Later that night, I went online and bought my first centerpin rod and reel, an Okuma Sheffield 1002s and a 13-foot Okuma Sheffield Rod.

I put down my fly and spinning rods and started fishing exclusively with a centerpin for the next few years. I was addicted! When I saw a stream, river, cove, rip, or outflow, I’d say to myself, “Man, that is killer pinning water right there!”

There was one particular day early on in my centerpin education that I’ll never forget. It was Thanksgiving morning, and I had time to kill before the family arrived for dinner. So, I packed up a bunch of jigs and leftover egg sacks from one of my recent trips up north for steelhead and decided to try the centerpin on my local trout stream in Connecticut.

I didn’t want to fish the river with my 13-foot rod, thinking it wouldn’t be much fun catching 13- to 18-inch trout on it, so I grabbed my 9-foot, 4-weight fly rod and slapped my centerpin on it. I made a 4-foot shot line of 6-pound test and a 3-pound leader, then started running an egg sac through one of my favorite runs. I made several casts and was beginning to think it might not work when the float dropped—and kept on dropping on subsequent casts. Most of the fish were holdover trout—up to 20 inches —then I caught a brown trout that was spitting out eggs. This is when everything clicked. I was matching the hatch! During the fall, brown trout spawn and release their eggs—they are cannibals and eggs are a big part of their diet in the fall and spring.

That day, I got to the water around 8 a.m. and left around 11, catching more than 60 trout during that time. Throughout the day, I had gotten many weird looks by my fellow anglers. They were giving me the same look that I gave the guy from upstate New York when he was catching steelhead every drift.

For the past 11 years while I have been centerpinning, the most frequently asked question is, “Why does the centerpin work?” It works because it provides a natural drift.

A centerpin looks like a large-diameter fly reel, but it has no drag, which allows it to spin freely on its axis (its “center pin”) forward and backward. Centerpin reels do have a clicker, but it is used for transporting the reel, not for fishing.

A centerpin rod is long, often between 11 and 13 feet in length. This allows the angler to keep as much line on the water as possible, to reduce drag on the rig, and maintain a perfect drift. The rods are also very limber in order to protect the light leaders.

The advantage of centerpin fishing is that it creates the most natural presentation possible in moving water by allowing your bait a drag-free drift at the same speed as the river current.

Centerpin reels are used with floats and a series of split shots (the “shot line”) leading to the bait. The arrangement of split shots under the float ensures that the bait is the first thing the fish sees, which is extremely helpful with pressured fish, like those in the Great Lakes tributaries.

Centerpin fishing is also remarkably versatile. You can effectively fish fast-moving runs by focusing your drifts on the seams where the fish are holding, and you can also fish pools where the water moves at a painfully slow pace. As long as your rig is equipped with the correct shot pattern, you can fish any area with a very natural presentation.

There are many different types of baits and lures you can use when centerpinning. Many fishermen believe you can use only bait such as egg sacs, wax worms, nightcrawlers, or minnows, but artificials also work very well underneath a float. Some of the artificial lures I use include marabou jigs, pink soft-plastic worms, and Berkley Gulp twitch minnows. Nymphs such as stoneflies, Wooly Buggers, Beadhead Caddis Pupas, Beadhead Prince Nymphs, and Beadhead Pheasant Tails are very productive as well.