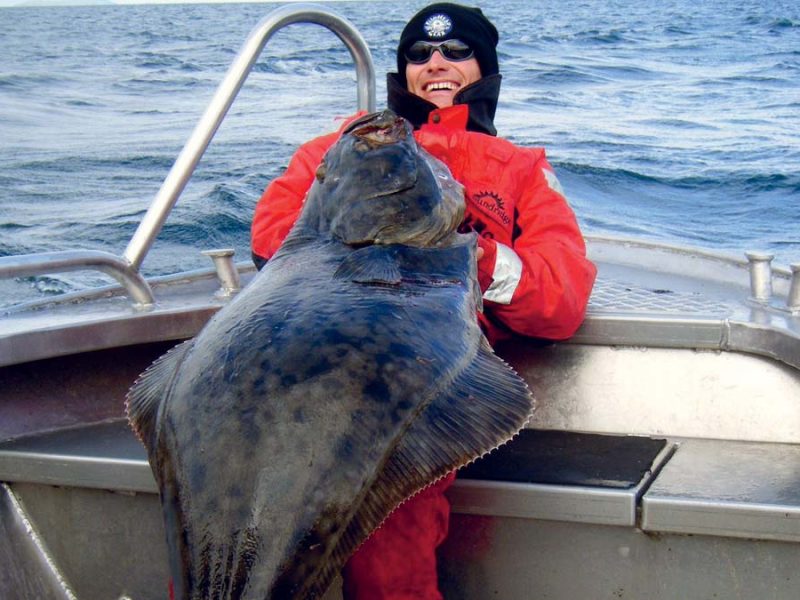 Pictured above: While Atlantic halibut are a rare catch off the US, in Norway, catches like this one, made by Allan Norgaard on the first day of the trip, are a regular occurence.

Much has been written on the once prolific cod and halibut fisheries off New England. Fishermen in dories used handlines to catch these monstrous flatfish, hooking codfish beyond count in the process. Unfortunately, overfishing by longlines and bottom trawling has beaten both fisheries into submission over the past century, leaving modern-day fishermen to wonder what it would have been like to experience cod and halibut fishing at its peak.

Many of these fishermen would be surprised to learn that they can have that experience—without the use of a time machine. Across the Atlantic, just inside the Arctic Circle, halibut up to 300 pounds are regularly caught, and cod schools are so thick that they fill the screens of fishfinders. For Northeast anglers who want to experience cod and Atlantic halibut fishing at its very best, there is no better place than Havoysund, Norway.

That is exactly what my close friend and Danish fishing fanatic, Allan Norgaard, promised when he invited me on a halibut fishing adventure to Norway. I accepted immediately and, last May, I joined Allan and his long-time fishing partner, Bernhard, at this bucket-list bottom fishing destination.

Bernhard has been a guide for halibut and giant cod in Havoysund since the inception of the recreational fishery there about 15 years ago. He had been guiding for three weeks before our arrival and was going to take a week off to fish and hang out with us. He’d reserved an apartment for us, as well as a boat for the week. In the days leading up to our trip, Bernard said he had located the bait and was cold-smoking some halibut for us—a process that takes more than 24 hours and gives the fish a wonderful smoky flavor.

Getting to Havoysund was a process. After spending two days in Copenhagen with my wife, I took a 90-minute flight to Oslo, Norway, where I took a 2 ½-hour flight to Alta, the northernmost jetport in the country. At Alta, I met Allan, and we packed our gear into a van provided by Norway Guide Fishing and drove more than 100 miles along remote paved roads through spectacular countryside.

When we arrived, it was still light out—of course, above the Arctic Circle, it’s light 24 hours a day in late May. Everyone we met upon our arrival was a fisherman, but I was the only American. Other groups included Russians, Fins, Danes, Swedes, and Germans. We greeted Bernhard and then unloaded our gear into an apartment located just a stone’s throw from the dock where our boat was tied up. In the apartment, all the windows in the bedrooms were painted black so that tenants could get some sense of darkness during bedtime hours.

After touring the premises, we were shown the boat and fitted into the arctic survival fishing suits and heavy felt-soled boots we’d be wearing while fishing.

That night, we had a dinner of smoked halibut and king crab, washed down with Danish beer. After the meal, we retired to our rooms. We were going fishing at 2 a.m. because it appeared that the weather was going to build later in the day.

After a couple hours of sleep, we headed to our boat, a 24-foot aluminum center console. All the Havoysund outfitters use the same basic boat design. Boats are equipped with radar and very good electronics, and are monitored from the home base by a GPS chip. In addition to having access to the boat for a week, our rental included the services of a guide who would join us for one day. The outfitter supplied us with bait rods and rigs, as well as halibut and cod jigs.

After donning our arctic clothing and boots, we loaded the craft with a bucket of heavily weighted soft-plastic swim baits, and the rest of our gear and food, and headed for the gas dock. After fueling up, we headed to the western edge of an island to the northwest and moved out to 60 feet until we began marking schools of 2- to 3-pound pollock—locally called coalfish—the ideal halibut bait. We marked fish almost everywhere we went along the coast, with some schools almost 100 feet thick. Bernhard identified each species based on their marks and distance from the bottom. The tiny, medium, and large cod, pollock, and other species were easy to identify once he had educated us.

After catching enough bait, we headed to the channel between Tufjord and Ingoy islands, where the tide was just turning to the east, and dropped our baits. While we waited for a bite, there was never a dull moment, as huge sea eagles soared above and small whales cruised by. As we drifted through the pass in 40 feet of water, a fish took my pollock bait. Since I’ve never caught a halibut, I didn’t know what to expect. After the initial thump, I felt dead weight for a moment. When I tried to gain line, the fish went nuts, beating its tail and heading for bottom. About 20 minutes later, we were lifting an “average” 70- pound halibut over the gunnel.

Shortly after that, Allan hooked a 90-pounder. After catching cusk, hake, and cod in addition to the two halibut, we headed back to the dock at 7am. Back in my apartment with the blacked-out windows, I crashed hard after the whirlwind of traveling and fishing over the last 24 hours.

The second day proved that our first day’s success wasn’t a fluke. We took the boat southwest to a channel on the north side of a small island called Reinoya, where ancient stone markers, evidence of Viking visitors, dotted the high ground.

Five minutes into soaking our baits, Bernhard hooked up with a 100-pounder that we released. A few short drifts later, I hooked up on a jig. The fish pulled the hook about a minute later, but we weren’t done yet! We caught two more halibut and some cusk and cod from the channel before the current slowed. Heading due east, we made a few unsuccessful drifts before making our way back to camp. While we targeted halibut, some of the other groups targeted cod and had nonstop action.

On the third day, due to the strong northeast wind and snow, we fished the southwest cliffs of Hjelmsoya, then fished our final two days back at Tufjord.
By drifting plateaus and drop-offs in 40 to 140 feet of water, we boated almost 20 halibut during the trip. We saved the best day for last, landing eight halibut, including my biggest, a 7-foot long, 250- to 300-pounder. Though we could have kept it, according to Norway rules, the outfitter asks that every fish over 62 inches is released to preserve the spawning population.

The weather during our trip was unseasonably cold and windy, and it snowed every day. Even with the northeast wind, we traveled easily between the many islands and fjords, and always found pleasant fishing conditions on the leeward sides.

Our incidental catches of cod were made up of fish smaller than 30 pounds. Had we been there three months earlier, we would have caught the spawning migration of giant cod, locally called “skrei.” Every year from January to April, cod move from the Barents Sea to the waters off Havoysund to spawn.

“When targeting these behemoths, be in shape and be ready for a beating,” said Bernhard. The cod schools are up to 200 feet thick, with the largest females near the bottom of the pile. The smallest fish are in the 25-pound range, with most around 40 pounds. The prized 75-plus pounders are plentiful if you can get a jig past the smaller, more aggressive males.
Atlantic halibut are available near Havoysund from April through October, with the peak season being May/June and August/September. They grow larger than their Pacific cousins, living up to 50 years and weighing as much as 700 pounds. They are the same species that was once abundant in New England waters before they were overfished.

The halibut bait rig was simple, consisting of a 4-foot section of 150-pound-test monofilament tied directly to a 17-ounce banana weight. An 8-foot section of 150-pound monofilament was added to the weight and ended with a large circle hook with several glow-in-the-dark beads threaded on the line. I went one step further, adding a chrome spinner above the beads, similar to a fluke rig, and drifted it as close to the bottom as possible. Allan and Bernhard quickly adopted this method because it seemed to attract more bites. It’s also possible to catch halibut on heavy, soft-plastic swimbaits jigged along the bottom.

We brought the maximum liquor, wine and beer allowed, even though we had no intention of finishing it all. A six pack of beer in Havoysund costs about 80 dollars, and no liquor is available! The booze made for great bartering for king crab and other goods. We brought other snacks and staples to save money because common items at the single grocery store on the island carry high prices. Meat is hard to come by, so we packed some frozen steaks during a layover.

In addition to the sea eagles and whales we encountered on the water, we saw many reindeer, arctic foxes, ptarmigans, large white arctic hares, and moose.

My journey to the northern tip of the world at Havoysund, Norway, provided me with memories to last a lifetime. As soon as the trip was over, I couldn’t wait to return, so I quickly booked my next trip!