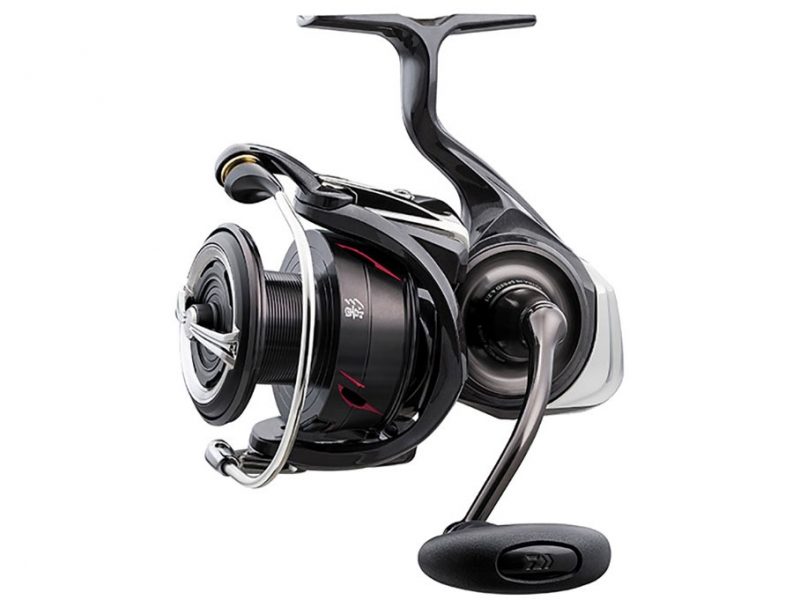 The all new KAGE (pronounced kah-gay) features a one-piece build, called the Zaion body. The frame provides more space for larger gears, giving the angler more torque and power to fight powerful inshore fish like stripers and bluefish. But just as important, it maintains the same gear ratios of competitive reels.

The entire Kage line is a dealer-driven reel series, meaning the focus is on local northeast tackle shops. There are no internet sales. You cannot buy it from any online dealer. It means big online companies like Amazon can’t sell this product, so there is no price gauging. Ultimately, buying from a local tackle shop not only benefits the local community, but the tackle shop will be more apt to share privy knowledge. Maybe it’s a tip about albies running the beaches, a “hot striper bite” or a small pond with big bass.

The new Zaion MONOCOQUE body features 360-degrees of stability and improvements in waterproofing over standard spinning reels employing conventional, screw-in side plates. 360-degrees of stability means the gearing is held firmly and in precise alignment. The less gears shift side to side, the less binding and wear take place, and longer your new reel will feel fresh out-of-the-box.

The MONOCOQUE body has no screw holes. Engineering-wise, when you introduce screw holes to a reel body, the holes must be built up with metal or plastic. That adds weight and decreases the amount of space inside the reel body for large gearing. In short, with MONOCOQUE, Daiwa can increase interior space to facilitate larger gearing and reduce overall weight, simultaneously. Lighter and more corrosion resistant than aluminum, Zaion is an exceptionally light but rigid material, which minimizes flex in the handle stem and gear box.

In comparison to other reels using rubber seals to protect the one-way roller bearing, Daiwa has waterproofing protection called Magseal. Magsealing uses a special magnetic bushing with a magnetic weld to create an airtight and watertight oil seal. The design eliminates the travel of contaminants or water down the main shaft and into the gear set or roller bearing. Daiwa’s patented Magseal process is so effective, it was originally used in the aerospace industry on space suits.

The Kage LT MQ also features an air rotor engineered to be incredibly rigid and with minimal flex, especially at high drag pressures. Critically designed cut-outs reduce the weight of the rotor, too. The lighter the rotor, the less force it takes to spin around the reel, making it easier to turn the handle.

The Kage LT MQ also features a tubular air bail, which further reduces weight and offers more rigidity than standard wire. The construction minimizes concerns over flex, bending or breaking. The thicker material is comfortable and ergonomic when flipping the tubular air bail.

A7075 aircraft-grade aluminum DIGIGEAR® technology is another hallmark of the Kage LT MQ. The especially hard and lightweight aluminum is precision machined and digitally cut, making it considerably more resistant to wear than traditional gear materials on the market.

Where reel meets angler, the Kage LT MQ features a machined screw-in handle that connects directly to the main drive gear. The other end of the handle features a premium, grippy cork handle knob, emblazoned with the Kage logo for aesthetic flair.

For versatility in freshwater and saltwater from Maine to New Jersey, the KAGE LT MQ is a next level, durable spinning reel, engineered with advanced technology and the highest quality materials.