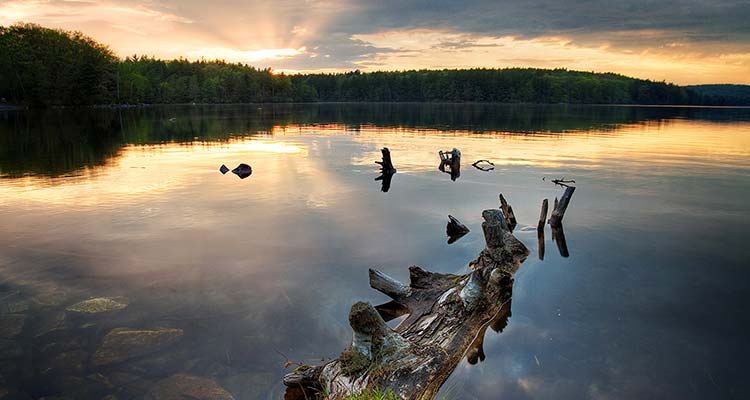 Winchester Lake is a rather unusual body of water. How it became the superb fishery it is today requires a little history lesson on northwest Connecticut.

Back in the 19th century, the Naugatuck Valley was the center of brass production in the United States. Waterbury was referred to as the Brass City, and the manufacturing of brass and copper was the major industry in the area. Flowing water was essential for these manufacturing plants to function, and they ran on mechanical and later electrical power produced from turbines located on the West Branch of the Naugatuck River. A series of dams in Torrington, on both the East and West branches of the river, diverted the water to maintain a constant flow to the turbines as well as to provide coolant for the heat-treating section of the plant. To create a water reserve for these factories, three lakes were constructed north of Torrington. Today they are known as Stillwater Pond, Park Pond and Winchester Lake.

When I was a young boy, my dad often took me fishing on Winchester Lake. A string of old wooden rental rowboats used to line the shore where the boat launch is today. There was also a picturesque fishing shack with huge dried pickerel heads nailed to the porch pillars. The patrolman at the fishing shack worked for the Brass Mill. He adjusted the dams for water flow, rented boats and did upkeep at all three lakes. He was also a local historian who had witnessed the construction of Winchester Lake as a young man. He could recall in great detail the dam being built as loggers using oxen and horses hand-cut the pine trees. The loggers were only finished with about two-thirds of the trees when the dam was finished and the lake was flooded.

Getting To Winchester Lke

Winchester Lake is located in northwest Connecticut in the town of Winchester. It is off the beaten path but still easy to find. The lake is accessed off of Route 263 on West Road; the launch is about 1.7 miles from the highway on the right-hand side.

Most of the remaining timber was harvested by cutting the trees close to the water line after the lake froze. Because of this, the tops of many tree stumps remain right at water level, which makes them difficult to see until they are bending your bow-mount electric motor. A slow approach and a set of polarized glasses can help identify potential obstacles. Although I prefer a more substantial craft, I have seen many canoes and kayaks on this lake. A personal flotation device is a good idea if you’re using one of these because it is easy to get hung up on a stump and roll over while trying to dislodge your craft.

Where the old fishing shack once stood, there is now a paved boat launch with parking for about 25 cars on the west side of the facility. The lake has a surface area of about 246 acres, and there is a maximum speed limit in effect of eight miles per hour. With all of the stumps, logs and timber on the north end of the lake, this isn’t the place to travel fast. Water clarity is limited, and the lake water retains a dark hue due to the pine forests that cover most of its watershed. There is good weed growth in both coves on the west side of the lake; pondweed and tapegrass are the predominating plants, and there are some scattered lily pads in those areas as well.

Winchester Lake is a great place to fish regardless of the time of year. This lake has no closed season for fishing, and it can be fished from shore, in a boat or through the ice. 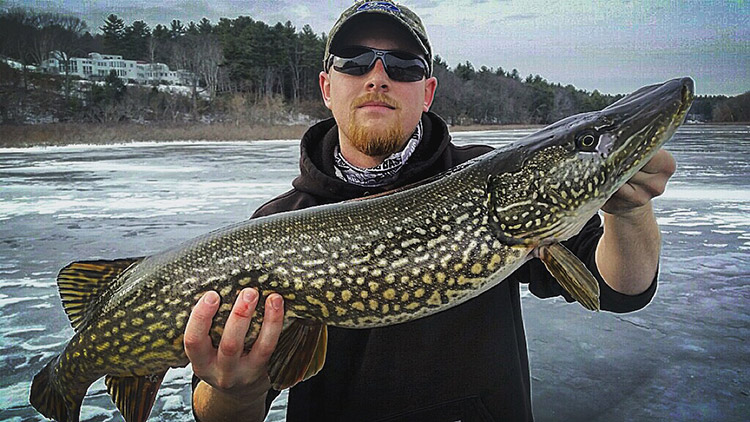 Winchester Lake is situated in one of the coldest areas of the state, elevated in the Litchfield Hills. It is usually one of the first areas to have safe ice and one of the last to thaw. That makes it a popular place for ice fishermen looking for some early and late-season action.

I have been fishing Winchester for many years, and talk of the lake brings back memories of my youth, including one fishing trip with my neighbor Frank Bozak. Frank packed as many of the neighborhood kids into his old Chevy Carryall wagon as he could, and then we dragged sleds loaded with gear from the parking area to the north end of the lake. After cutting many holes and setting out an army of tip-ups, we were rewarded with a few small perch and a skinny, undersized pickerel.

Later in the afternoon, a couple of fishermen walked up to the north end and set up a short distance from our gear. The two of them were drinking heavily, taking long swigs from a jug of brandy. They had no auger, but somehow used an ax to cut a hole through the thick ice without hurting themselves. The dynamic duo then began to fish with two short spin-casting rods, shiners and bobbers. The pair had only been fishing for a little while when they decided it was too cold for them. They loaded their gear onto a sled and walked by us, heading south toward the boat launch.

As they passed, we saw a fish hanging over the back of the sled. Based on its size, we initially thought it was a bass, but upon closer inspection it turned out to be a huge, fat-bellied, 20-inch yellow perch. Frank tried to explain to them that they had caught the Connecticut record yellow perch, but they were too inebriated to appreciate what they had landed. Since then I have fished in a lot of places but have never seen a bigger yellow perch.

Ice fishing Winchester Lake is not for the faint of heart. The old pine trees in the lake have weathered the century well and now form a fortress-like habitat for game fish. This is definitely a spot to use heavy leaders or braided wire at the business end of your tip-up. When a flag goes up, you’d better hurry because almost any running fish can put you into a mountain of fallen, submerged timber.

In addition to the populations of yellow perch, largemouth bass and pickerel, you can find northern pike, Winchester Lake’s newest residents. Back in 2001, the Connecticut Department of Environmental Protection began to stock fingerling northern pike in the lake. With all of the available forage fish, the stocking of excess pike from Bantam Lake was a great idea. It certainly has added a new dimension to fishing this body of water!

Ice fishing for pike is a lot of fun. They love cold water and are very active all winter long. I have found that they seem to cruise through the shallow bays on the west side and into the logs and timber; wherever the baitfish are, a pike is probably close by. Ice fishing for largemouth bass and yellow perch is usually done close to the shallows on the west side. Although setting tip-ups in the timber may be tempting, I have found more gamefish just inside the bays, where the shallower water holds schools of baitfish. 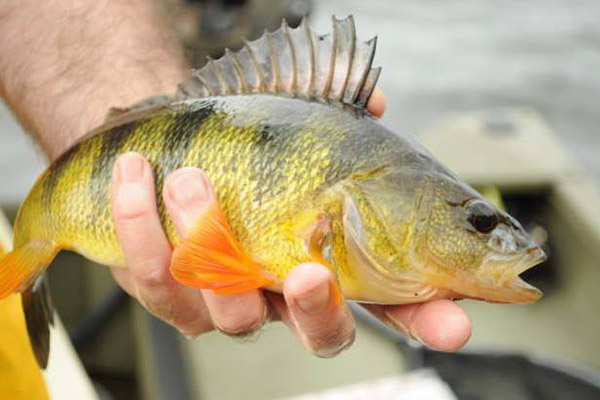 Spring not only brings welcome relief from the icy grip of winter; it also changes the patterns of Winchester Lake’s residents. The yellow perch often spawn before ice-out, in early to mid-March. Anglers looking for yellow perch usually like to hit the weed edges close to shallow-water bays, using small shiners for bait. After spawning, the schools of perch will move to somewhat deeper waters as summer progresses.

In recent years, the size of the yellow perch in Winchester Lake has begun to improve. The perch population had been showing signs of stunted growth due to anglers taking too many of the larger bass and pickerel. But following the introduction of northern pike and the acceptance of catch-and-release bass fishing, natural predation has thinned the numbers of panfish, decreasing quantity but increasing quality.

While yellow perch are usually the first to spawn, northern pike are right behind them. Pike spawning right at ice-out is awesome to watch, as they head into shallow, weedy back bays to lay their eggs on the vegetation. Watching them crash and splash in the thin water is quite an experience.

In the spring, largemouth bass will seek out warmer water to feed. Good areas to find bass include shallow bays that are warmed by the sun’s rays being absorbed into the bottom. Their spawn usually happens after the second week in May. When casting to largemouths cruising the shallows, try using smaller plastic baits rigged Texas-style with a light sliding sinker (1/16 to 1/4 ounce) for a quiet splash. Spinnerbaits are another good way to cover ground quickly. Use smaller, 1/4- or 3/8-ounce white or chartreuse baits to keep them from sinking too fast in the thin water. 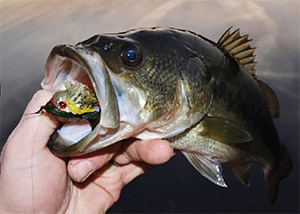 As the water warms, northern pike usually will hit a spinnerbait or crankbait fished along the edges or over the tops of weed beds. I have found that using a wire leader limits the action of the lure and consequently reduces the number of strikes from northern pike. I like to improve the odds by adding a trailer hook with a plastic 3-inch grub to make the spinnerbait a little longer. In general, I have had successful hookups using a heavy mono leader without losing the lure to the toothy critters. So far I have not caught a Winchester Lake pike more than 3 feet in length, but that doesn’t mean that there aren’t some monsters lurking around, waiting to bite.

Flipping is another fun tactic that works well in the heavy timber when the water temperatures rise. A heavy flipping stick with 20- to 30-pound-test braided line is a useful tool for fishing in this woody jungle. For largemouths, I like to use a 1/2- to 5/8-ounce jig with a brown-and-orange skirt. Add a brown #11 Uncle Josh pork trailer to this lure to make it even more effective. Another one of my favorites is a black jig with a blue-and-black skirt, but instead of a pork trailer, add a 6-inch blue or black curly-tail plastic worm as the trailer. This rig also works well for pike that have taken to the cooler fortress of the timber jungle.

When a fish hits the jig, it is a matter of setting the hook hard and pulling the fish away from the timber that it is hiding in. It’s a good idea to bring some extra gear, because the timber does take its toll! Bring your polarized glasses and flip your jig as close to the trunks of the trees as possible, then let the lure fall straight down the trunk to the roots.

Fall weather will begin to cool the lake waters, ushering in another phase of fishing on Winchester Lake. When the upper layer of water gets too cold, it collapses through the water column and stirs the water, a process known as turnover. Strong fall storms also churn up the lake, and this can really change the fishing pattern until the water temperature and clarity stabilizes. The fishing usually slows down until things settle.

During the turnover period and for a while after, I have found that both predators and baitfish tend to suspend in schools over the deeper areas of water. This is a good time to cast deep-running crankbaits that rattle or vibrate. Bass and pike will often be attracted to the commotion during the low-visibility period. Schools of yellow perch and panfish will be tightly collected. Using small plastic jigs, I like to vertical jig using my depth finder to keep the fish underneath the boat. As the water stabilizes in late fall, these schools will head to shallow water and scatter as ice begins to form. The bass and pike will usually do the same.