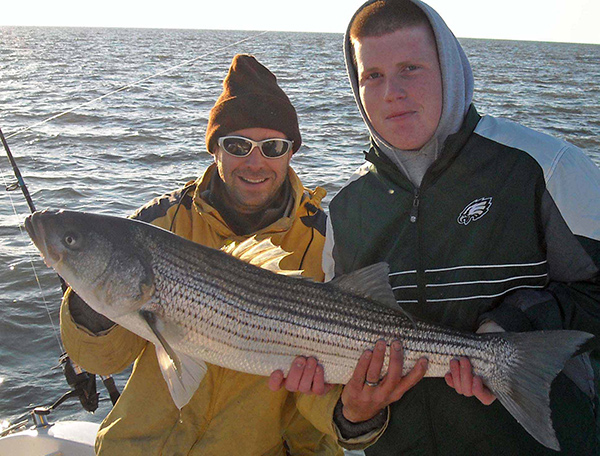 Chumming with clam bellies is a can’t-miss autumn tactic in New Jersey’s backwaters.

It was late June and the heat outside was oppressive. The back-bay fluke fishing had slowed, and I had no idea what to fish for. The tackle shop had a few bags of clam bellies left over from earlier in the week, so I decided to try some chunking. We set out around noon, under a blazing sun, at the top of the tide. There was a little west wind, but it barely cooled us off in the 95-degree heat. As the tide began to ebb, I started chumming.

After 20 minutes, the first fish came over the side, a short, fat 24-incher caught by my friend. After that, the action was non-stop. As fast as we could bait a hook and chuck it out, a fish was running with it. Stripers were hitting the baits before they hit bottom! The total for that hot Saturday afternoon was 22 stripers in just over two hours of fishing.

Chumming and fishing with clam bellies is one of the deadliest tactics for catching back-bay stripers. It is productive from the start of the season in March right through the season close in December, but is especially good in the fall when migrating stripers move into the back bays to feed before continuing south.

The clam “belly” is the soft part of the clam behind the foot or “tongue.” While the tongues are popular for seafood dishes and bait, the bellies are usually discarded. Unbeknownst to most, these soft, slimy bits of clam are like candy to stripers.

Once you have a day’s supply of clam bellies, dump them into a big tote or cooler and mix in some saltwater to make a “clam belly stew.” This will be your chum, but be sure to set aside enough bellies to use as bait. The scent will draw in the bass, and they will start to feed on the bits of clam bellies drifting back in the current. Stripers won’t let these easy meals get past them, and they will gorge until there are no more bellies left to eat. Chum heavily when first arriving to your spot, then pull back to ladling out a scoop every 5 to 10 minutes. It is important to keep chumming even as fish are being reeled in—if you stop chumming, the bass will move on.

The clam juice mixture will attract bass to you, but you still need to find a location where stripers feed naturally. Deep-cut sod banks, points, creek mouths, bridge pilings, rock piles and slabs of submerged concrete all hold fish. Back-bay bass and other clam lovers will hang around these areas waiting for a meal to come their way. It is not uncommon for small black drum to take a clam or two when chunking deeper areas in our backwaters.

Figuring out which tide to fish certain structure is half of the battle, but you can narrow it down based on the type of structure. For example, if the tide is coming in and flooding the creeks and sod banks, anchoring at a mouth of a creek will not produce many bass. Instead, target creeks on the ebb. Stripers will sit in front of a creek mouth as the tide flows out, feeding on the baitfish and crustaceans that are washed out with the tide.

The tackle for chumming with clam bellies is similar to chunking in the Delaware Bay, but much lighter. Though it is possible to catch a monster striper in the back bays, light tackle is best suited for this style of fishing. A medium-action 7-foot spinning rod with a matching spinning reel spooled with 20-pound-test braided line will do just fine.

I use a simple fish-finder rig with 6/0 Gamakatsu Octopus Circle hooks snelled to 20- to 40-pound-test fluorocarbon leader. I go with the lightest sinker possible that will still get the bait to the bottom. At peak tide, that may be 3 ounces. Around slack, a 1-ounce sinker will usually do the trick.

Attach two to three clam bellies per hook, in case one falls off on the cast out. Cast the baits behind the boat, let them sink to the bottom and close the bail. I always hold the rod in hand, feeling for any kind of bite.

It is very common to feel a bass on the other end of the line just “mouthing” the bait. You will feel slight tugs and taps. When the fish takes off with the clam in its mouth, the line will tighten quickly and the battle will be on. Reel down and lift the rod to secure the circle hook. Setting the hook after the first tap will tear the clam bellies off the hook and give the striper a free meal.

Using a light sinker allows you to lift the lead off the bottom a few inches and let the current take it back to its original position. I cannot recall how many times a striper swiped the clam bellies off the bottom after a few jigs. Giving the baits that little action can occasionally trigger a huge bite.

We have all heard that patience is a huge part of fishing. This is true to a certain extent, but chunking with clam bellies is one of the exceptions. If you have been chumming and fishing for more than an hour and have not had a bite, it is time to relocate. Move to another location and start up the slick again. More often than not, the clam bellies will quickly draw in stripers from all over the back bay, and you will be able to enjoy fast action for hours on end.