It was Thursday, August 4, and I was sitting at home getting my gear ready for a night of fishing. The conditions were going to be perfect: the moon would be up, half-full at sunset. The half-moon would make the tide a slow one, and the moonlit sky would set up a perfect backdrop for a monster fish on the bottom, allowing it to easily see anything that floats or swims above it. Even better, slack high tide was about a half-hour before sunset.

A big striped bass will eat just about anything it can fit in its mouth, but as anyone who has cleaned a few big bass probably knows, lobster is one of their favorites. When the tide is slack or moving very slowly, lobsters are more likely to venture out of their rocky hiding places and move around to feed. This is the time, I believe, when giant bass will feed. They can swim around without wasting energy fighting the current, and they can also sense a moving lobster at a greater distance.

Once the tide picks up, more fish will show up on the reefs. Getting to the big bass at this point is very hard; smaller fish will almost always intercept your bait. Plus, a really big striper that eats 5 percent of her body weight in a single tide has almost certainly had her fill by then, and she will be resting somewhere out of the current until the next slack tide period. When the current is pushing hard, your chances of catching a 30- or 40-pounder are still very alive, but the chances of catching a monster are slim!

I usually rig three rods for the night trips. My goal is to eliminate the problems that may arise when a giant striper is hooked, so I pay close attention to the things that I can control. The braided line gets cut back a few feet before every trip to get rid of any worn spots. Then I check my three-way swivels for any defects – there is nothing worse than having your swivel break apart on a big fish, and believe me, it happens! Then I rig a fresh hook and leader – 50-pound-test fluorocarbon and a new hook, every time. I always trim the tag end of the knot; I don’t want a big bass to feel anything out of the ordinary that might cause it to spit that bait before I have a chance to set the hook.

With everything ready to go, I was waiting for my fishing partner Matt Farina to show up at my house. Matt’s a great person to fish with because if you tell him to be there at 5 pm, he’ll be there at 4! There is nothing worse than waiting for someone when the perfect conditions are slowly passing you by. Matt also knows the routine on my boat. When one guy hooks up, the other guy reels up and gets the net ready. When we’re fishing, we talk very little and very softly because the really big bass have lived a long time and probably understand that people are a danger to them. You don’t want them to hear you moving around or talking above them. If Matt loses his eel, he knows to wait until the drift is over before grabbing another one and rapping its head on the side of the boat (necessary to “relax” the eel so it won’t tangle into the dreaded eel knot).

When Matt showed up at my house, I was sitting on my deck waiting for him. He got out of his truck, and like every time we see each other, he shouted out, “What’s up you blankety-blank!” – calling me some terrible name that I’m almost sure he spent the whole day thinking up! I always respond with the most horrible thing that I can come up with, usually something like, “Not much, you dirty eel rag that’s been lying in the sun all day with seagulls pukin’ on it!”

Then we laugh, put our gear in the truck and take the 20 minute ride to the boat. He always asks me, “So how big tonight?” I always respond with, “When I pull this one out of the water, the ocean is going to drop a foot!”

That night, we finally left around 7:30, waving to the happy hour crowd as we passed Bill’s Seafood, an outdoor bar at the entrance to my marina, Pier 76 in Westbrook, Connecticut. Because of the high tide, we had to lower the rods from the rod holders to get under the famous singing bridge.

After the bridge, I raised the rods back into their holders and tried not to wake all the boats in the yacht clubs and marinas on the way out of the river. As we were heading out, I told Matt that the conditions were perfect and we were right on time. I reached the mouth of the river and put the hammer down. With no tide and no wind, I was able to trim the motor to reach the boat’s full speed of 33 knots.

Within minutes, I had my boat set up for its first drift of the evening. We baited up and set the drift so that we would be drifting over one of my favorite spots, a huge boulder that is about 12 feet around and lies under about 55 feet of water. After the boulder, you come to a reef that is about 30 feet deep and then drops off to 70 feet of water. There are numerous lobster pots and rocks on the reef, which makes it very difficult to land a big fish once it’s hooked. In this general area, I have hooked and landed several fish above 60 pounds and one fish above 70 pounds!

The first drift was perfect. I had a huge strike but missed the fish. I suspected there was a monster sitting down there, and I knew that the fish never felt the hook, that it had just managed to grab the tail end of the 24-inch eel. I frantically reeled up, and Matt knew without my saying a word that it was time to reel up and repeat that drift.

We started the same drift, and in the same exact spot, WHAM! The fish struck hard, and then I felt nothing. The line wasn’t moving, so I knew that a big fish had inhaled that eel and was just sitting on the bottom. I set the hook hard, and the fish responded with a couple of very strong headshakes, but it didn’t budge – there was no run, just a very heavy weight. I leaned into her with as much force as I dared, and finally she responded with a strong 60-yard run. With very little current, she was actually able to pull my 18-foot boat against the tide! Matt reeled up and got on my right side with the net. He looked at me and said, “That’s not a fish!” I assured him it was, and when I looked over at him his face actually had a look of terror! “It’s going to be ok,” I told him. “She’s coming up to the surface so I think I can keep her away from the lobster pots.” 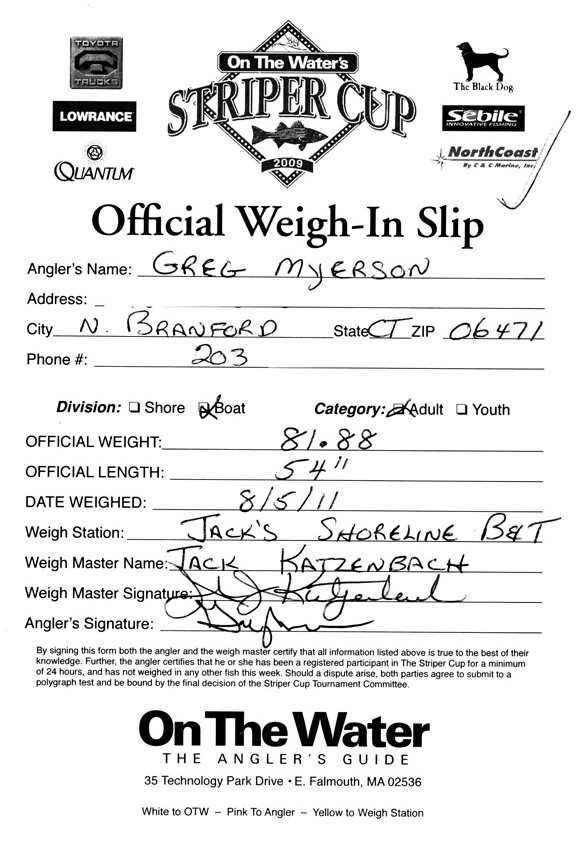 The first thing we saw was her massive dorsal fin. It was the largest I had ever seen. Then the huge tail came up and broke the surface of the water, sending water flying 12 feet in all directions. I had never seen any fish I’ve caught throw water like that! She stayed on top, thrashing the surface, and I remember thinking that I hope the hook is set well. She was able to make a few shorter runs, and each time I moved the star drag on my Quantum Cabo reel one click tighter. She eventually had nothing left, and I got her boatside. I think it was a simultaneous reaction from both of us: “HOLY SHIT!”

Just as Matt went to net her, she made a hard push away from us, and as the net slipped around her she pushed it against the swim platform and it got stuck! She was in the net, but the net was snagged on the swim platform and in the water. I reached down to try to get my hand in her gill plate, but just then the net came unstuck. Matt tried to lift the netted fish into the boat, but the weight was too much and the net handle started to fold. I quickly reached over and grabbed the net, helping him hoist her into the boat. I was fishing barefoot, as I usually do, and my foot slipped on eel slime. I smashed my ribs hard against the gunwale of the boat as the fish came over the side. We had the fish – and I couldn’t believe how big she was!

I always consider releasing my fish before putting them in the fish hold; I have released fish up to 70 pounds. But when I looked down at the fish, I knew it could place me in the lead for Angler of the Year in the Striper Cup, ahead of Pete Vican, so into the hold she went. On the next drift, Matt hooked up a nice 47-pounder. By then the wind had started to kick up out of the south, so I headed to Six Mile Reef, where I could get a south-to-north drift. We hooked and released a dozen more bass that night.

Throughout the night, I kept going over to the fish hold and looking in, saying out loud, “Is this fish really that big?” Yep, it was.
Eventually we headed in to celebrate what I thought, once I weighed the fish in the next morning, would surely be my second-straight Striper Cup “Angler of the Year” victory. I had no idea, until that fish registered 81.88 pounds on the digital scale at Jack’s Shoreline Bait and Tackle the next morning, that I had actually caught the new All-Tackle World Record striped bass.