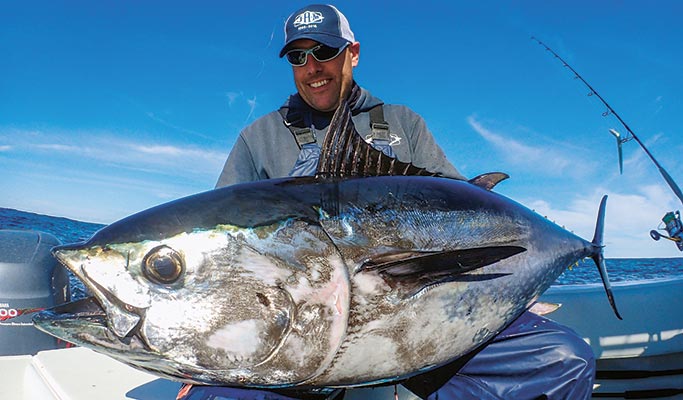 The tuna game is ever-changing for the captains chasing them with spin gear.

Catching big tuna on spinning gear isn’t the big news that it was just 10 years ago. Today, anglers routinely catch bluefin over 70 inches on tackle once thought only suitable for inshore species. We talked with some of the captains who were there for the start of the spinning rod revolution to see how the fishery has continued to change.

Just a few years ago, most spinning rod tuna were being caught on metal and soft plastics, with a few falling to poppers. Today, no serious run-and-gun captain hits the tuna grounds without a quiver full of stickbaits. These lures can cost more than $100 apiece, but Northeast tackle shops can’t keep them in stock, selling out within days, sometimes hours, of receiving a shipment.

“When I first started chasing tuna with spinning gear, all I could get them to eat was a weightless nine-inch Slug-Go,” said Captain John McMurray of One More Cast Fishing Charters out of Long Island. “The problem was, you couldn’t cast it on gear heavy enough to fight a tuna.”

Early plugs lacked the through-wire to stand up to big tuna, said Captain Dom Petrarca of Coastal Charters Sportfishing. Petrarca began exclusively targeting tuna on his charters in 2006, and, like McMurray, started out by casting soft plastics at the fish.

Captain Jack Sprengel of East Coast Charters said tuna fishermen began switching from Slug-Gos and Tattoo Sea Pups to RonZs and Daiwa Dorado Sliders, which then gave way to some of the more specialized baits being made today.

McMurray said the advent of long-casting stickbaits has really changed his approach to tuna fishing. “At first, you look at these baits and they don’t look like much. Even in the water, they don’t seem to do much,” McMurray said, “but they cast a mile, and on a slow-sweep retrieve, tuna crush them.”

“The hard-body stickbaits have better silhouettes, and they stay up in the surface feeds,” said Petrarca, emphasizing that they stay in front of the fish.

Slowing down the retrieve is another lesson many captains have learned since getting serious about casting to tuna. “You get into that mode of fishing for albies and bonito,” McMurray said, “where you want to retrieve as fast as you can, but with bluefin and yellowfin, you need to do the opposite. To go super slow.”

“Retrieve the lures slower than you would for striped bass,” advised Petrarca. “Tuna are fast,” he explained, “their food—with the exception of halfbeaks—is not.”

McMurray fishes his most productive stickbait, the clear-silver Shimano Orca 190, with a long, slow sweep to make it dive, and then a pause that allows it to float back up to the surface. “The hit always come on the pause,” he said.

Two of Sprengel’s favorite stickbaits are the Strategic Angler Frantic and the Strategic Angler Espada. The Frantic, he said, is great for less experienced anglers because all you have to do is reel it in. The Espada, Sprengel said, is deadly in the hands of more seasoned anglers, who will impart the action to the lure with the rod tip. 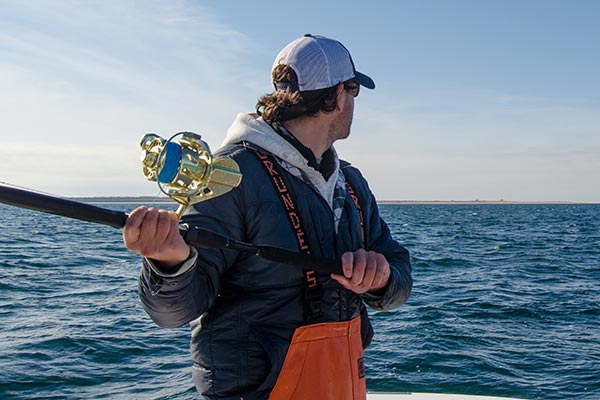 A decade ago, most captains considered blind-casting a fool’s errand on the tuna grounds. They instead waited to get within range of a surface-feeding frenzy before wetting a line, and often switched to trolling or live bait when not seeing tuna on the surface.

Today, many captains put their anglers to work as soon as they reach an area with signs of life, be it whales, birds, or baitfish. Stickbaits have played a role in making blind-casting more productive by allowing anglers to keep lures in the water longer with long casts and slow retrieves. Tuna cruising near the surface will change course to intercept the wounded baitfish cadence of a slowly worked stickbait, helping anglers hook fish they would have never seen on the surface or the sounder.

Soft plastics still hook plenty of tuna every year, but most captains have abandoned the inshore-specific plastics, like the Slug-Go, for tuna-specific lures like the RonZ.

“When tuna are holding 30 to 100 feet down, slow-jigging a RonZ is tough to beat,” said Rice, who catches dozens of tuna every year on these lures.

Like the hard-body stickbaits, a slow retrieve is key with the RonZ, letting the lure’s profile and subtle action win over the tuna.

“I think the RonZ works because it doesn’t resemble any baitfish in particular, but to a tuna, it just looks like food,” said Sprengel.

The late Ron Poirier, founder of RonZ lures, did a lot of research and field testing not only in designing a bait that the tuna would bite, but a bait that would hold up to a big hooked tuna without having a hook straighten or pull out. The Big Game 4X Heavy Duty head includes a 500-pound Krok Swivel, a 500-pound through-wire, and a swinging 9/0 hook that locks into a tuna’s jaw.

“We used to use muskie rods and big surf reels,” Sprengel laughed when describing his first seasons casting to bluefin back in 2005 and 2006. When the tuna-casting game was in its infancy, there were no rods designed for the technique. Many fishermen simply used heavy striped bass equipment or ultra-heavy spinning rods that were difficult to cast and tiring to work a lure with. Today, rod manufacturers have refined the resins, nanofibers, tapers, and wall thicknesses needed for rods that are lightweight enough to cast and work lures, but strong enough the break the spirit of a 100-, 200-, or even 300-pound-plus tuna.

Durability is a major factor, Rice said. He’s partial to the Van Staal series of jigging rods because he said they won’t break, even in the hands of an inexperienced angler. McMurray likes the Saltywater Tackle El Maestro and Race Point rods. Both are easy enough to cast all day, but strong enough to fight big tuna to the boat. Sprengel uses the Shimano Ocea Plugger. The rod loads up and casts beautifully, and puts tremendous pressure on the fish when held at a 70-degree or higher angle.

The extra line capacity allowed by super-strong, super-thin braided line is what makes catching tuna on spinning gear possible, but it’s the connections from braid to leader and from leader to lure that put the tuna in the boat.

“Early on, we would lose so many fish,” Sprengel said. “Rods would blow up, reels would blow up, the rigging would break.” “The rods and reels caught up to the big tuna,” Petrarca said, “but the terminal connections were the slowest to develop.”

As the fish grew, so did the need for a seamless connection between braid and leader. “Knots just don’t cut it,” Petrarca explained. “Knots,” he said, “degrade as they knock against the guides while casting over the course of the day.”

The solution for Petrarca and some other captains has been hollow-core braided line. Captain Bobby Rice splices his leader directly into the braid (shown left), creating an ultra-smooth connection that slides easily through the guides when casting or during the final tug of war with a boat-side bluefin. Petrarca forms an end loop in his hollow-core braid using a rigging needle and then attaches a wind-on leader from BHP Tackle with a loop-to-loop connection.

“We don’t see the big 200-pounders they get off the Cape,” McMurray said, and most of the tuna he sees weigh less than 100 pounds. McMurray breaks rank from the New England captains, using a slim beauty knot to connect his 60-pound-test leader to his main line. “Wind-on leaders are expensive,” McMurray explained, “and you go through a lot of leader when fishing tuna.”

Most premade wind-on leaders are perfect for jigging, but are too long for casting. Sprengel said he’d end up cutting the pricey, premade wind-ons in half, so he moved away from them, experimenting with several knots before settling on a modified version of the slim-profile FG knot. “I’ll never use another knot again,” Sprengel stated. An FG knot connecting 80-pound-test braided line to 80-pound-test leader survived a battle with a 92-inch, 400-pound bluefin aboard Sprengel’s North Rip center console in November 2015, which was proof enough for him—and dozens of other tuna fishermen—that the FG knot is tuna tough.

At the end of the leader, McMurray uses a Tactical Anglers Power Clip. “You may only get two or three shots in a day,” McMurray said, “and when I get a refusal, I want to change the plug as quickly as possible.”

Sprengel, Petrarca and Rice all attach their lure to a split ring on the end of a large barrel swivel. This provides a secure connection and relatively fast lure changes. Sprengel recommends the Krok barrel swivel as it has a larger ring, which allows anglers to attach a greater variety of split rings.

To attach the swivel/split ring setup, Rice has found that there is no better connection than a mini-crimp. “I’ve tested knots in my basement against barbells,” Bobby said, “and nothing even came close to the mini crimp.” Petrarca and Sprengel use a Palomar knot. Sprengel said less hardware helps give the lures a more natural action.

Though no one actively seeks out giant tuna with spinning gear, there’s no telling what size fish will find the lure. Just a few years ago, anglers had little hope of landing giant-caliber bluefin because reels lacked the drag power and rods lacked the strength to subdue 73-inch and larger tuna. Now, every season captains win battles against 80-inch, 300-pound-plus tuna on spinning gear, and it seems like the tackle is capable of landing any fish the anglers themselves can handle—and that’s proving to be pretty large. In November 2015, Sprengel bested a 92-inch, 400-pounder. Rice’s personal best is a whopping 423 pounds taken on October 10, 2014. Just a few days later, Petrarca boated a 597-pounder on spinning gear. The only question left is who’s going to be the first to break 700.