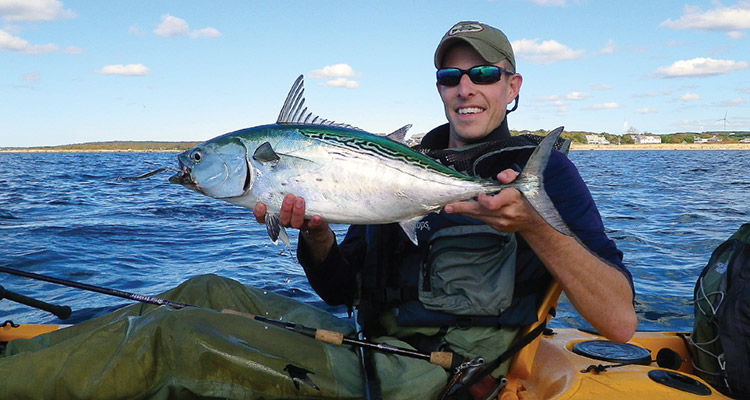 From the moment I reached the parking lot and jumped out of the truck to pull my kayak off the roof, I was in a full-on rush. Two trips across 30 yards of soft sand, one to haul the kayak down to the water’s edge and another to carry rods and tackle, and I was off, pedaling into the pre-dawn light. A 20-minute jog took me out beyond the last channel marker, in the area where the fish had shown the day before. As my breathing returned to normal and the sound of my heart pounding in my ears began to recede, I realized it was remarkably quiet.

I scanned the water, trying to see near, far, and in all directions at once. Looking at the small fleet of boats two miles to the east, I began the first round of second-guessing. Fifteen minutes went by, the sky grew brighter, and the morning’s excitement was fading to doubt. Should I have kept driving? Had I chosen the wrong place to launch? Then, a splash. I whipped my head around. Somewhere off to my right, I saw, or maybe just heard, a single splash. My eyes glued to the patch of water, I made a slow turn toward it while at the same time picking up my spinning rod, taking the lure off the hook holder, and opening the bail. A tern appeared and circled over the area, then stopped and hovered about 50 yards away.

I held my breath. With an audible whoosh, a series of dorsal fins and silver backs ripped through the surface tension in rapid succession, and tiny baitfish sprayed ahead and above the white water. I made a quick sprint to close the gap before flinging the skinny Kastmaster just beyond the crashing school of albies. Speed-reeling it just under the surface and right through the melee, I tensed, ready for the jarring strike of a false albacore hitting at full speed. Instead, the lure came back to my rod tip untouched. I lifted it to launch another cast, but in that moment, the fish were gone. All was quiet again—except for the sound of my heart, once again pounding in my ears.

Fishing for false albacore from a kayak is one of the greatest thrills that inshore fishing in New England has to offer, and once you actually hook one, it only gets better. The explosive strike is all the more impressive when viewed from sea level. Then there is the first run, always blazing fast, at a drag-peeling speed that distinguishes these fish from any striper or bluefish. Mid-run, an albie will suddenly change direction, streaking back toward you so your line goes slack for a gut-wrenching moment. In a kayak, this means being towed in one direction and then having the fish turn suddenly and flash by underneath, leaving you with no option but to shove the rod tip into the water and try to clear it around the bow. Just when an albie has made its last run, it will dig in and turn broadside, swimming in wide circles beneath the kayak refusing to give up the fight.

To catch a false albacore from a kayak, you have to put yourself in the right place, at the right moment, with the right lure. Occasionally, getting all three right is still not enough—but that’s just part of the challenge of these notoriously finicky fish. 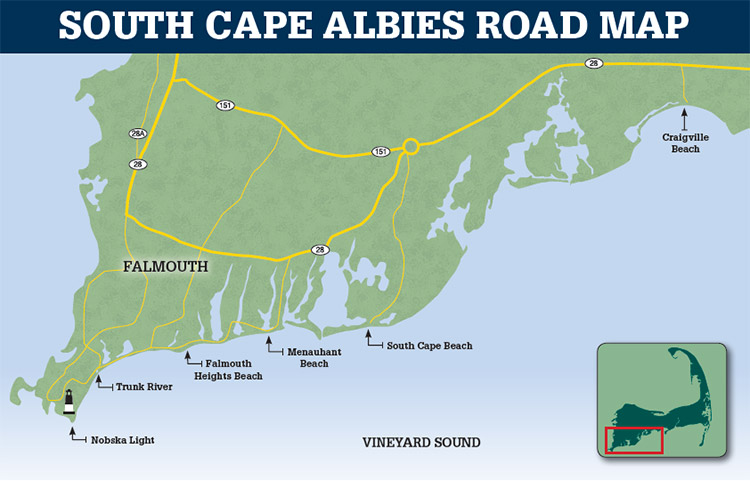 The south side of Cape Cod is a good place to start your hunt. In any given year, there’s no guarantee that the fish will show, or that they will stick around for any length of time. But for what’s it worth, the stretch of shoreline from Craigville Beach to Woods Hole has produced a good albie bite several years in a row now. A look at a map will tell you why—the south side is dotted with salt ponds, bays, and estuaries that dump baitfish into Vineyard Sound. Combined with a strong, sweeping tidal current, it’s a perfect hunting ground for late summmer’s ravenous schools of false albacore.

The south side also offers a number of easy places to launch a kayak, mainly beach parking lots with short carries to the surf line. Rarely is the entire stretch of shoreline hot at the same time, so choosing where to launch is important. Typically, the bite will begin just before sunrise, concentrated in one area, and then move along the coast in either direction. Sometimes the fish will appear at the same place at the same time two or more days in a row. Sometimes they will move in one predictable direction, perhaps with the flow of the tide. Sometimes they spread out as the tide slows, and often they disappear completely at slack tide. A pair of binoculars can be helpful when bouncing from parking lot to parking lot, looking for a reason to launch. A network of friends connected by cell phones can be invaluable.

Baitfish are the catalyst of the latesummer bite, and each year the mix of bait and the dominant prey can be different. In 2014, the south side was awash with peanut bunker in early September, and the quarter-sized baby menhaden had the albies feeding with abandon and striking all types of lures and presentations. In previous years, tiny bay anchovies the width of a fingertip drew in big numbers of albies, but getting them to hit anything other than a well-presented fly was nearly impossible.

Fly-fishermen have the advantage of being able to accurately match the bait, while spin-fishermen do their best with assortments of long-casting metal lures and soft plastics. Sometimes, a heavier metal lure increases your odds by helping you reach with a cast before the fish go back down. Other times, you’re better off making fewer presentations but increasing your odds of fooling a fish into striking by throwing a soft-plastic bait. Figuring out what the fish want, and how you’re going to present it to them, is all part of the challenge.

To maximize your casting distance, whatever lures you’re throwing, select a fast-action spinning rod that’s at least 7 feet long and has a soft tip. A longer and more flexible rod will also help you clear the line around the bow of the kayak and give you some cushion when you inevitably have to high-stick the rod to bring the fish in close.

While fishing for false albacore from a kayak can appear to put an angler at a disadvantage when compared to the skiffs and center consoles with the advantage of horsepower, that’s not always the case.

The quiet stealth of a kayak is less likely to spook fish, and not having the ability to “run and gun,” chasing down every bunch of fish that pops up, can work in your favor. Being paddle- or pedal-powered forces patience. While it can be painful to wait and watch as the powerboats race off to a huge school of fish and diving birds in the distance, if you stay in the same area where the fish recently came to the surface, they often pop up again–and you’ll have them all to yourself.

When the bite is hot, boat traffic will build and albie fever can take over, so staying safe is important. Do all you can to make yourself visible to other boats. I highly recommend flying a flag and wearing bright colors. Stay alert, and be aware of the presence of any boats that are operating recklessly. If the crowds build in a popular area such as at the mouth of Waquoit Bay or off Nobska Point, you’ll be safer if you move away from the pack—and you’ll often be rewarded with fish that aren’t being run over by boats and are therefore more willing to strike your offering.