UV lures such as these Panther Martin Spinners, appear to glow when shown under a black light, which simulates what a fish’s vision might look like.

For decades, fishermen have discussed, debated and dissected the topic of how colors and patterns in fishing lures trigger strikes from game fish. Just when you think it’s all been said, a new trend in fishing lures emerges. 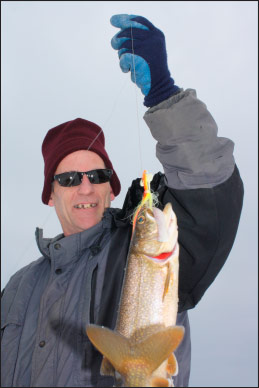 Beneath the ice and snow in winter, the lack of penetrating light rays drastically reduces visibility. This is a classic condition where UV-reactive finishes can be of great benefit.

Ultraviolet (UV) light is the high- frequency band of light not visible to the human eye. While human eyes can’t see it, UV light can be detected by certain animals that have additional light-sensing cones in their eyes. In recent years, scientists have discovered that not only are some species of fish able to see light in the UV spectrum, but that their UV-detection abilities are actually quite good. As a result, using UV coloring has been heralded by some manufacturers as the latest innovation in fishing lure technology.

Fish use a combination of senses to locate, detect, and attack prey, includ- ing sight, vibration, smell, and taste, and opinions vary on how important UV vision is in the overall equation. Scientifically determining how fish use UV vision when feeding isn’t easy. Light behaves differently in water than it does in air, and factors such as time of day, weather conditions and water clarity affect the availability of natural light within the water column, so how colors and patterns are perceived by game fish ultimately depends on the conditions. And, scientists have found that the ability to perceive light differs greatly by fish species, or even within a species over time. 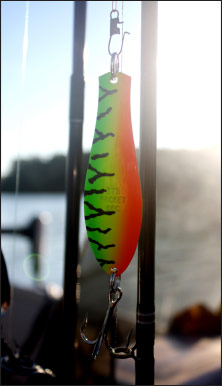 The addition of waves and stripes on top of reactive paint on UV fishing lures can give an almost three-dimensional swimming appearance when seen within the UV light spectrum.

“Some fish actually have receptors in their eyes that change at different depths,” explained Mark Stiffel, vice president of marketing for Brecks Inc., makers of classic Williams brand lures. “If you take Chinook salmon, for instance, the dominant receptors in their eyes are blue-green when they are in the deep-water cycle of their lives. When they move into the shallow water—when they are spawning at the end of their life cycle—their receptors become red. The same thing applies with steelhead, but that’s a short-lived change. Their eyes change in terms of reception and light as they come from deep to shallow when they are feeding.”

More lure manufacturers and fishermen, especially those who fish professionally, are paying close attention to the latest innovations in UV lures and tackle, as information about UV is slowly becoming available to the public in the forms of scientific studies and fishing articles. And while no one
can say for certain that UV vision plays an important role in getting fish to strike, no one can say that it’s completely irrelevant either.

Williams Lures is just one of many prominent lure companies that have been experimenting with new finishes and reactive paints on their UV fishing products.

“The UV theory has actually been around a long time,” said Stiffel. “There are a lot of testimonials. It’s been extensively used in the saltwater fishery and the fisheries—we’ ve been hearing about it for years in the West Coast salmon fishery. So there’s something to it. But the importance of UV vision to fish is not a black-and-white, cut-and-dry issue.” Ultra violet colors and finishes take ad vantage of UV light to produce a muted glow that attracts the attention of game fish. “We have a couple of UV lights we use at shows just to show people what it looks like,” Stiffel explained. “It is just a representation because the human eye can’t see UV, but it looks like someone’s actually lit something behind it. It pops when you throw UV light on it.” 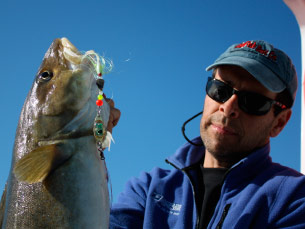 Deep sea fishing is another low-light application where ultraviolet can improve lure visibility and catch ratios.

Certain colors are more UV reactive than others. And while some UV colors and patterns are new to the industry, others have been catching fish for a very long time. “In soft plastics, one of the hot colors for walleye, northern pike or bass is chartreuse,” said Stiffel. “If you take a black light and shine it on chartreuse, it just pops. It looks like someone actually lit it up. Now is that a reason why it works? You know, I’m thinking it is. Yet white, which is the most popular color in terms of sales—so t must work, and I fish white very often myself—hardly reacts at all. So the jury is still out on that.”

Like any new concept, a lot goes into the research and manufacturing process: creating prototypes, field testing, design tweaking, and ultimately releasing a new or redesigned product to the market. Cecil Hoge, co-owner and president of Panther Martin Lures, makers of the classic Panther Martin inline spinner among many other products, explained the process his company went through while experimenting with and ultimately choosing UV finishes for their UV lure lineups. 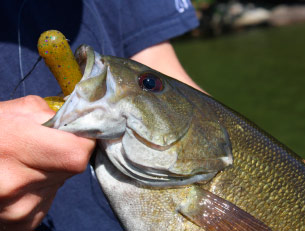 Bass are often most active during low-light conditions, which makes brightly colored lures that much more effective.

“We took a black light and put UV patterns under it to see what really kind of jumped at you,” he explained. “Be- cause the black light simulates what the UV vision of a fish is, it became very obvious that anything of a fluorescent color was very dramatic. It also became obvious that when you put in black lines, it created interesting effects.” What they discovered at Pan- ther Martin is when a black line is painted across a fluorescent- colored spinner blade, it creates a multidimensional, lifelike appearance when the lure is spinning. “Essentially, a UV lure looks totally different under a black light. The actual colors alter; they change in kind of strange ways. So we thought out patterns that were maybe a little more dramatic and violent, if you will, than what other people have done. We’ve now shown these to pretty much everybody who sells freshwater tackle in the industry and there has been an extremely positive reaction.” Similarly, UV-reactive ma- terials and components can be added to lures to enhance their appearance. Brecks, for example, had a great deal of success by adding UV-reactive eyes to some of their classic, metal Williams lures. The UV- reactive eye created a highly noticeable focal point for fish to key in on. Likewise at Pan- ther Martin, their focus turned to UV-reactive hook dressings on their UV spinner models. “When we chose the marabou feathers for the inline spinners,” Hoge explained, “we found that the marabou itself, when we treated it with UV, really jumps out at you. The feathers create kind of a flowing pattern. So you get an extra effect, if you will, when dressed.” 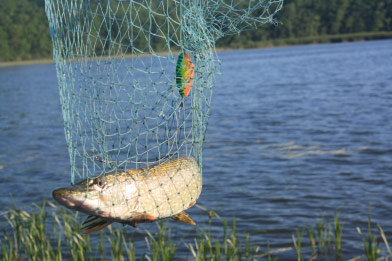 For the workbench angler who likes to tinker, UV tape and UV paint can be added to standard lures to help them radiate in the water column, making them more visible to predator fish over longer distances. This can be especially useful in low-visibility conditions such as tinted or stained water, in deep water, under ice and snow cover, and in the low light of dawn and dusk. Similarly, a UV-treated lure can be added about a foot above fresh or live bait to act as a beacon, signaling “dinnertime” to any nearby game fish. However, when fish- ing in shallow water or in situations with ample light and clear water, it might also be possible that a sudden flash of vivid color could spook a wary fish. In these situations, it may actually be better to stick with natural or muted colors. The key, of course, is to try and learn which colors and patterns (both standard and UV) to use under what conditions to the greatest effect.

“It all depends on the day,” said Stiffel. “You go out and experiment. You go out on a bright day and put the brightest lure down there, and if it doesn’t go off, then put on the dullest, muted lure and work toward the middle and find out what happens. Sometimes the black lure with chartreuse tape on it that reacts to UV is the ticket. In spring runoff conditions, for example, when the water is clouded, I’d definitely lean toward UV-type colors: chartreuses and oranges and pinks. Pink has been my go- to color on lake trout in the spring when I’ m trolling lead-core line, and even right through the year, right through into the summer. And, lo and behold, when you shine a black light on pink—pow! It explodes!”

Ultimately, it will be the angling public who will figure out when and where UV finishes are effective. As more mainstream lure brands start to produce lures with UV finishes, more fisher- men will start fishing the baits for their target species and conducting their own angling research. The results will show in their catches.