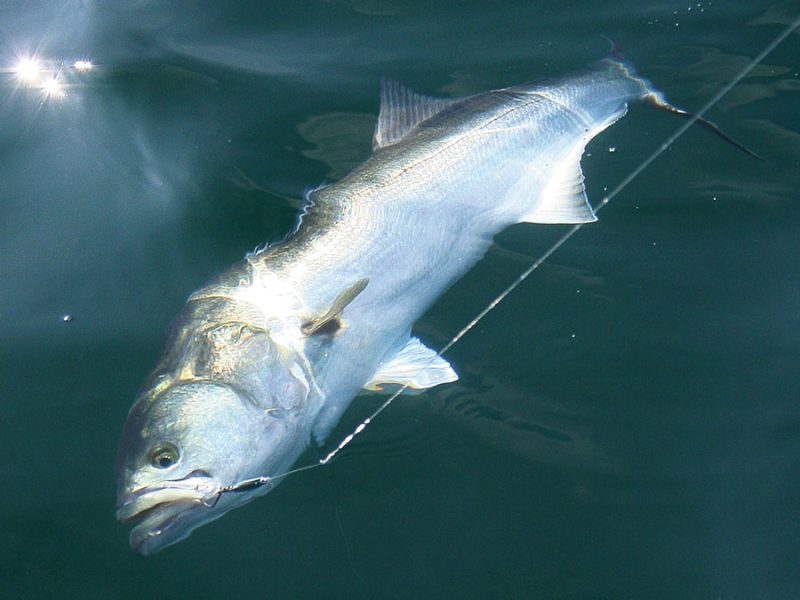 The wind that cancelled my tilefish trip forced me to don the thick neoprene jacket I’d brought along, expecting a cold sunrise offshore. Instead, I was using it to cut the chill as I followed Steve Perna down the sod bank on the hunt for Plan B—bluefish.

It should have been the heart of the bluefish run off New Jersey. For as long as I can remember, early to mid-May was a lock for big blues. I used to curse them for cutting off my clam-baited circle hooks or slicing through a pack’s worth of Pink Zooms. But, on day two of my hunt with Steve, it felt like we were chasing ghosts.

We were a tide behind the reports. Shell Caris had found them on the outgoing in the back; Tom Lynch had them on the incoming out front. We bounced between bay, inlet, and beach, finding stripers, but no blues, a juxtaposition of my efforts a couple decades earlier.

With just three days in Jersey to get my bluefish fix, it would have been easy to write off the fishlessness as bad timing—I’d arrived too early, too late, or during one of those mid-season lulls that happen from time to time—but the fishing had been lacking all spring, and it never improved after I left.

A few months later, NOAA declared the bluefish as overfished, and the bag limits dropped from 10 (or 15 fish, depending on the state) down to 3 fish (or 5 fish aboard for-hire vessels). 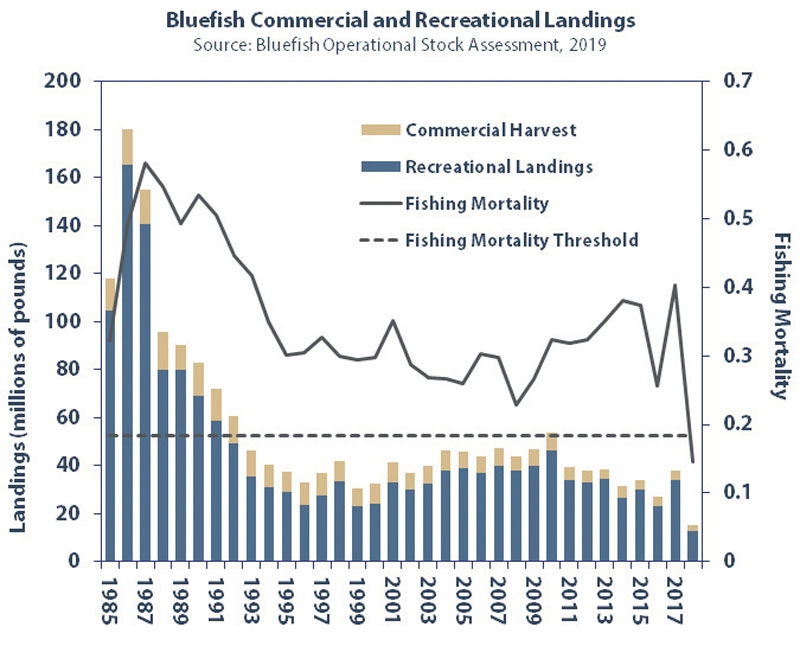 The disappearance of big bluefish was a slow bleed for me and for many of the striper-, fluke-, and albie-focused fishermen in the Northeast. When I first visited the Cape Cod Canal in the early 2000s, I thought nothing of the bluefish blitzes that pinballed around the Big Ditch at the middle of the day. In 2010, I could count on a weeklong onslaught of big blues around the Cape in late September or early October, especially around the full moon. Over the years, that week whittled down to a few days, then one day, and this past year, none.

Snapper blues, a late-summer staple for kids, kids at heart, and trophy-seeking fluke fishermen, have been largely absent as well. I’ve looked forward to introducing my daughter to the pint-sized savagery of a snapper blue since she was born in 2015, and I still haven’t had the chance.

Like many fishermen, I have a complicated relationship with bluefish. I love to catch them when I’m targeting them, but I’d rather not encounter them when I’m not. For example, my first saltwater fish of 2019 was a Floridian bluefish caught at Sebastian Inlet in January. It was roughly 2 pounds and did what 2-pound bluefish do best—shredded my soft-plastic trailer. I’d traveled to Florida to catch “exotic” species like snook, red drum, and tarpon, so I was somewhat less excited to catch this bluefish, than I would have been to catch one several months later in New Jersey.

Blues have a much broader range than stripers. You’ll find bluefish off the east and gulf coasts of the US, off the east coast of Brazil, both coasts of Africa, and most of Australia. As a result, they go by many names. They’re called “elf” and “shad” in South Africa, “tailor” in Western Australia, and “[expletive deleted]” by eel-slinging surfcasters in New York.

Rumors of 40-pound bluefish off the West Coast of Africa persisted into the early 2000s, even though none ever made the record books. The largest bluefish ever caught on rod and reel was a 31-pound, 2-ouncer caught off the beach at Hatteras, North Carolina, in 1972. It takes a bluefish just one-third that size to trash your tackle. Their never-say-die fighting style has ended many a rod, reel, and lure. A bluefish on dry sand will put up almost as much of a fight as a bluefish in the water.

Not only do they swim in most of the world’s oceans, but they live in a wide range of habitats. I’ve been on tilefish trips when fishermen pulled bluefish from extreme depths at the edge of the canyons. Unlike just about all of the other fish caught on those trips, which arrived at the surface with bulging eyes and distended stomachs from an extreme case of the bends, the bluefish came up fighting and snapping, ready to remove digits from careless anglers.

I returned from my New Jersey trip, hoping to find some bluefish back at their traditional haunts on the South Side of the Cape, but for the second season in a row, they were nearly a no-show. A handful were caught, but it was a far cry from the set-your-watch-by May bite that used to have the On The Water office empty onto South Cape Beach whenever the afternoon wind went southwest.

Bluefish have no near relatives. While striped bass have close cousins including white perch, white bass, and European sea bass in the Moronidae (temperate bass) family, bluefish are the sole member of the Pomatomidae family. In my dog-eared and coffee-stained copy of Erwin A. Bauer’s Saltwater Fisherman’s Bible, the bluefish is lumped in with mahi, tripletail, and cobia in a chapter called “Unusual Fish.”

Bauer calls them the “world’s great mystery fish,” noting their tendency to disappear for years at a time. Records of bluefish population extremes date back to 1764, Bauer says, theorizing that they run in population cycles of 40 years.

Fishermen once believed that these cycles of bluefish abundance were the result of a migration pattern that took them to the far side of the Atlantic. While bluefish are wide-ranging, it’s unlikely that they’re making trans-Atlantic crossings. The American Littoral Society’s bluefish tag returns on Western Atlantic blues show three migratory patterns—one from New England and the Northeast to the mid-Atlantic, one from the mid-Atlantic to the southeast, and one east to west off Florida.

The last period of scarcity began in the 1920’s, according to Bauer, and did not end until the early 1960s. This lines up with the writings of surfcasting author Frank Daignault, who claimed that when the blues first began returning to the New England surf, fishermen didn’t know what they were.

My copy of the Saltwater Fisherman’s Bible, a third edition revised by Bob Stearns and published in 1991, noted that the most recent cycle of bluefish abundance showed no signs of slowing down, though it did provide this warning: “Many bluefish experts, citing the 40-year-cycle theory, maintain that the current boom is overdue for a bust.” Perhaps we were overdue for some lean bluefish seasons. But, perhaps not.

Late every summer, we’ve been able to count on an influx of “cocktail” blues, the rambunctious 1- to 4-pounders that can be difficult to escape when after bonito or fluke. As fishermen, I think we are all entitled to a little hypocrisy, so I don’t feel too bad about cursing these mid-sized bluefish after lamenting the absence of their larger brethren earlier in the year. At times, the blues have seemed so thick that one could walk from the beach in Falmouth over to Martha’s Vineyard on their backs. But, when the cold winds of fall send the little blues south, the 10-pounders that used to take their place are nowhere to be seen.

The story of the 2020 bluefish season is yet to be written. Every 15-pound gator was at one point a 3-pound cocktail, so perhaps the return of the big blues is just a couple years away. Regardless, when the warm southwest winds of May blow through the dunes, head for some back-bay flats or a south-facing beach with a box full of poppers and a fisherman’s unbeatable optimism, knowing that one day, the blues will be back.