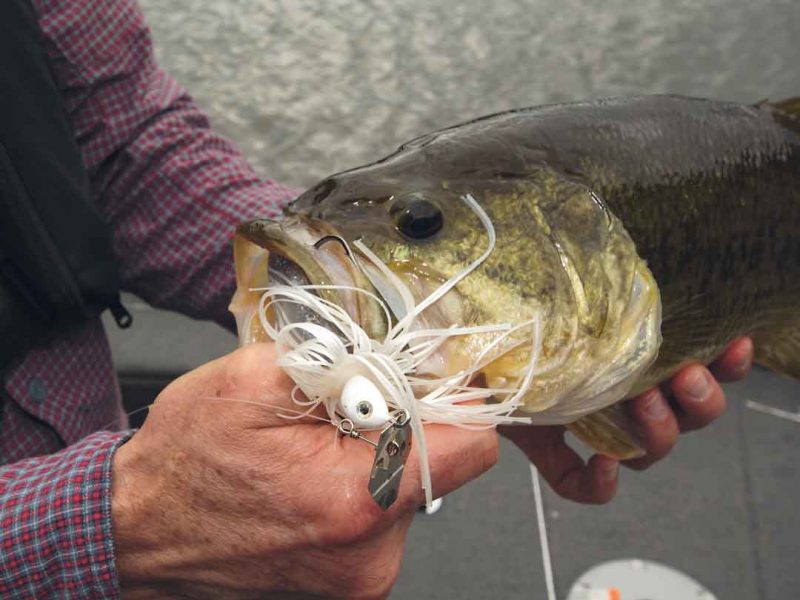 A cool breeze sends a ripple across the water and pushes the spray from a casting reel into my face as I watch my friend, Craig Lister, make a country-mile cast. His bladed swim jig hits the water, sinks, and then slowly tickles the tops of the deep grass as he swims it back to the boat.

Toward shore is a large, shallow bay where largemouths spend the summer. To our right is a long point. The grass on the flat in front of us varies from large beds to isolated clumps; the occasional rock pile and sand patch are also present. It’s a textbook fall bass hangout.

“There’s one,” Lister says as he leans into a fish. The largemouth bulldogs next to the boat, but within short order, Lister is lipping another chunky fall bass caught on a bladed swim jig.

This scene repeats many times throughout the day, with the odd smallmouth bass thrown in the mix. I don’t recall the exact number of fish we caught, but I remember having a good case of bass thumb, the kind that stings just a little when enjoying salty fries and a burger at day’s end. If you are not using bladed swim jigs for largemouth and smallmouth bass in the fall, you should start right now. They are excellent for covering water and have a reputation of putting big fish in the boat. Better still, fishing a bladed swim jig isn’t rocket science. Cast, reel, set the hook, land a bass, repeat. Master the basics and you’ll be hauling in bass on these jigs year-round, not just in autumn.

As the name suggests, this category of lure consists of a skirted swim jig outfitted with a blade at its head. The blade is a key element because the water resistance it creates gives the jig a natural shimmying, swimming action accented with plenty of vibration and flash.

These lures are unique. Akin to a Frankenstein-like patchwork of three proven baits, they feature the seductive flash and thump of a spinnerbait, the bulky appeal of a jig, and the erratic movement of a crankbait—all rolled up into one package.

Beyond being distinct, bladed swim jigs are versatile. They excel in both shallow and deep grass scenarios. They are a good option for working docks, swimming over rocks, and prospecting edges of current seams. The list goes on and on, and holds true across the country – from southern impoundments up to northern lakes, not to mention plenty of river scenarios where bass lurk.

Bassmaster Elite Series Pro Stephen Browning says a bladed swim jig is a great choice during the fall when water temperatures range from 65 degrees to the upper 40s. With success fishing these lures on Oneida, Cayuga, and other northern lakes, he mentioned those water bodies during our conversation to give examples of locations to use this jig for bass in the fall on northern, clear-water systems.

“On those lakes, I started off fishing small rock piles in really skinny water in a two- to four-foot range,” Browning said. His lure of choice: a 3/8-ounce Z-Man Project Z ChatterBait in dark green pumpkin or pearl ghost. His trailer was a 4.5-inch Z-Man Razor ShadZ in a matching color to create a baitfish profile and mimic a perch or a shad.

“Going to a place like that, my intention was to burn it over the top of those shallow rock piles or to slow-roll it, trying to make it tick the top of the rock piles. I wanted the fish to tell me how aggressive they were on that particular day,” Browning said.

Ticking the rocks, to Browning, means occasional contact. A swim jig is not overly snag-resistant and too much contact leads to hang-ups.

“You have to be cognizant of your reel speed and how deep the bait is running,” Browning said. “The ideal thing is to bump a rock every once in a while. Trying to stay six inches to a foot above the rocks is key.” A bladed swim jig isn’t a lake-only deal. Browning uses it to work current breaks in rivers. The lure’s vibration and action will also call bass out of wood, he says. Work the bait on the edges of timber; if you cast at the heart of the cover, you risk hang-ups.
River grass lines are also hot territory. Smallmouth are notorious for hunting along vegetation edges in rivers. A bladed jig is a good option for covering water and calling in fish in stained river water.
For hard lines in lakes, one option is retrieving the bait parallel to vegetation. Anglers should also experiment with 45-degree casts to the bank and work the lure over rocks, sand patches, and lanes in the greenery as grass dies back in autumn.

Give it a Little Juice

With bladed swim jigs, Browning uses a steady retrieve, but adds a critical variation. After every four or five rotations of the reel handle, he flicks his wrist to accelerate half a turn. This results in the bait surging forward roughly 12 to 18 inches, depending on whether he’s winding a 6.4:1 or 7.1:1 Lew’s BB1 Pro Speed Spool casting reel.

“It’s just a little burst, but many times, as soon as you do that is when your line goes slack,” Browning said. “You can’t get complacent with only a steady retrieve with this lure.”

Grass lines are also good locations. Browning prefers distinct edges since these “hard lines” are easy to see in clear water. Positioning the boat parallel to one, he makes a long cast and works the bait along the edge of the hard line and ticks the top of the greenery, similarly to how one would use a lipless crankbait.

He likes a bluegill ChatterBait Elite 3/8-ounce tipped with a green pumpkin Razor ShadZ for slow-rolling inside grass lines in the 4- to 8-foot range. When bass are relating to a hard line for shade and cover, Browning uses a ½-ounce Elite to achieve a deeper swimming depth along the edge.

Browning also uses a ½-ounce model for working the top of deeper grass on a flat. When the grass dies back in autumn and folds over, the added running depth of the ½-ounce bait can be key. Ditto when it comes to working deep, outside vegetation edges.

If you’re wondering why Browning uses an Elite and not a Project Z, it’s because the Elite runs deeper due to its head design.

“I catch more fish on the ChatterBait Elite up in the northern lakes than I probably do on any other head style,” he said. “If I need to slow it down and get it a little deeper on the edge of the grass or tick the top of the grass, the ½-ounce model is the one I generally go to.”

Bass like anomalies on deep grass flats; for instance, large holes are bass magnets. When he spots an opening, Browning kills the retrieve so the lure drops into the void. And, if he’s often going to be faced with this scenario on a flat, expect to see him casting a Project Z ChatterBait since its design delivers a potent vibrating action on the drop.

The trick with this approach is timing the fall. It should be long enough to attract bass and get in their strike zone, but not drop so far that the bait eats grass when it exits the hole if unsuccessful at triggering a bite.

Letting a vibrating swim jig sink into pockets was one of the tricks Lister used during our fall outing. Like Browning, Lister predominantly uses a steady retrieve when working a bladed swim jig over flats, but adds a pop-and-stop now and then by jerking his 7’6” G. Loomis E6X903C MBR rod. When he saw a hole in the grass or a bend (or cut) along the outside edge, he’d stall the ½-ounce Strike King Tour Grade Rage Blade outfitted with a 3.8-inch Jackall Rhythm Wave Swimbait. He likes the Rage Blade for this tactic because its weighted blade design causes the jig to collapse and dive well. That day, every largemouth crushed the sinking bait like it had insulted its mother.

Lister is a savvy angler with a bladed swim jig and he’s got a few tricks you should know when it comes to cold-water bass. He frequently fishes long, tapering points, which are bass highways for fish moving back and forth from shallow to deep water.

“Anytime you can find a rock-to-weed transition, especially on a point, make sure you fish it,” Lister said. “Rock areas draw the heat from the sun on bright, sunny fall days, warming the water temperature, which in return attract baitfish and crayfish. Only a few degrees can make a huge difference when the water is cold.”

Lister casts the vibrating jig beyond the target, then swims it towards the spot. He experiments with rod snaps and stop-and-drop moves, letting the bass reveal what triggering action works best.

It could be said that, for whatever reason, many anglers overlook bladed swim jigs, especially when it comes to smallmouth.

“Transition areas with sand to weed are great any time of the year, but they excel at attracting smallmouth bass during the fall months,” Lister said. “Smallmouth love to cruise sand flats on warm fall days, hunting down pods of baitfish and a ChatterBait-style jig will catch them.”

Deep, upward-feeding smallmouth can also be fooled with a bladed swim jig in the fall. In many respects, this is a continuation of a midsummer pattern. Large shoreline points, bars, islands, reefs, and neck-downs are all constricted spaces where smallmouth will herd and attack shad, smelt, and other open-water baitfish inhabiting deep flats and basin areas. When smallmouth are hunting in these zones, soft jerkbaits, spinnerbaits, swimbaits, and topwaters are popular choices. On pressured systems, a bladed swim jig presents a completely different package for smallmouth and can help trigger bites from big, wise bronzebacks. I admit that a bladed swim jig wasn’t on my radar for this scenario a couple years back, but then a buddy absolutely cleaned up on shad-eating smallmouth using a ChatterBait. I’ve since changed my ways.

Rod and Line for ChatterBaits

“The action of the rod is very important,” Browning said. “It’s one of those baits, almost like crankbait fishing, where the fish needs to load up, so I would definitely suggest not using a rod that’s too heavy. But, you should use a heavy enough rod to get that one single hook in there…. don’t use your worm rod, use your spinnerbait rod.”

“Fluorocarbon line is a standard when it comes to hard-striking smallmouth,” Lister said. “It has more stretch than braid, but is heavier in overall weight. With long-distance casts, this allows the Rage Blade to be pushed down further on a retrieve when covering flats.”

Versatile and easy to use, a bladed swim jig is a potent presentation from skinny water to deep flats and everything in between. Be sure to tie one on this fall for largemouth and smallmouth bass. You won’t be disappointed.