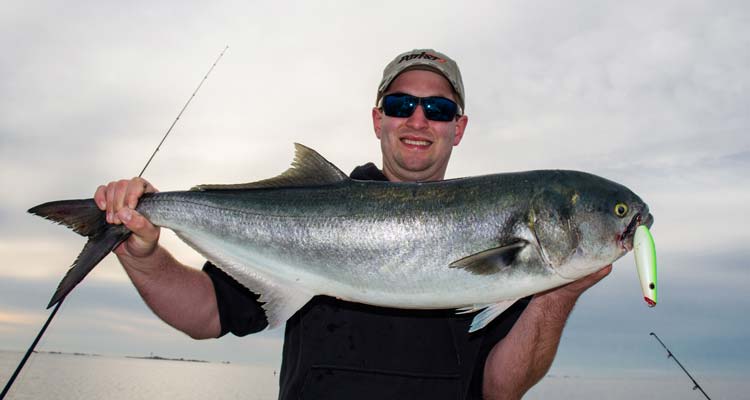 The bunker-filled bays of Long Island’s North Shore attract monster blues during the heart of fall.

When the fall run begins, most surfcasters dream of casting at Montauk or along the open beaches, but some of my most memorable fall fishing has taken place in the backwaters.

Warm water temperatures over the summer make the back bays a nursery for a variety of baitfish. Adult and peanut bunker are abundant in October, so scouting local back bays will give you an idea of which bays hold what bait. As the days get shorter and temperatures drop, migrating predators such as bass and blues will tuck into the bays to gorge themselves during their trip south.

In August 2016, every bay on the North Shore of Long Island had an unbelievable amount of bait. Some had peanut and adult bunker, along with snappers, while others had only adult bunker. By early September, the bait seemed to triple. It looked like you could walk across Cold Spring Harbor on the backs of adult bunker! And, every bay to the west was not far behind. By the third week of September, there were happy bunker everywhere. I began to wonder if the bluefish might never show up.

I was elated to be wrong. During the last week of September, the back bays lit up with bluefish. They were larger than I’d ever remembered, even going all the way back to the late 70s when I was a boy.

Fish of 16 to 20 pounds terrorized bunker schools daily. I landed a 19-pounder, and released 1,100 pounds of bluefish over the first 18 days of October, before heavy north winds blew in dirty water and shut down the bite. The big blues did most of their feeding at sunrise and sunset, but there were days when the action never stopped.

I began following the fish as they moved west from bay to bay, trying to catch a 20-pounder. One late afternoon in Little Neck Bay, the westernmost bay on the North Shore, I was in water up to my chest and launched a 2¾-ounce Super Strike Little Neck Popper. I was towed through the water for 2 hop-steps by a blue, then my 40-pound braid broke. I was certain it was a 20-pounder—the local party boats had fish to 22 pounds!

These blues were so strong that I was using a 10-foot, medium-action rod matched with a Van Staal VS200—an outfit I typically reserve for the rocks of Montauk or the open surf of the South Shore. But, this was not a typical fall!

As October went on, the back bays took on a carnival atmosphere as dozens of folks got in on the nonstop action. I counted as many as 90 people on the sand in Glen Head, and even the local shop owners who don’t regularly fish were there. It was a phenomenon.

These large, toothy fish required some modifications to standard equipment. The wire leader had to be 36 inches long with a 125-pound-test Tactical Anglers Power Clip. I removed the rear trebles on all my lures, and replaced them with 6/0 Siwash hooks on 6.5H split rings. Many of the 18- and 19-pound fish hit the front of the plug like a bass, mangling the 9626 4x VMC hooks so often that I was replacing hooks every night. My best producers were Cotton Cordell 1- and 2-ounce pencil poppers, Super Strike 2.75-ounce Little Neck Poppers (when I needed distance), and the 6-inch Tsunami TS Talking Popper.

As October wore on, I became afraid of losing the red-head/yellow-bodied Super Strike popper. It had been brand new at the beginning of the month, but by October 14, it looked like it had been attacked by woodpeckers. I kept swapping out wire leaders as they frayed, and never lost the plug, but it’s retired now—1,100 pounds of released bluefish later.