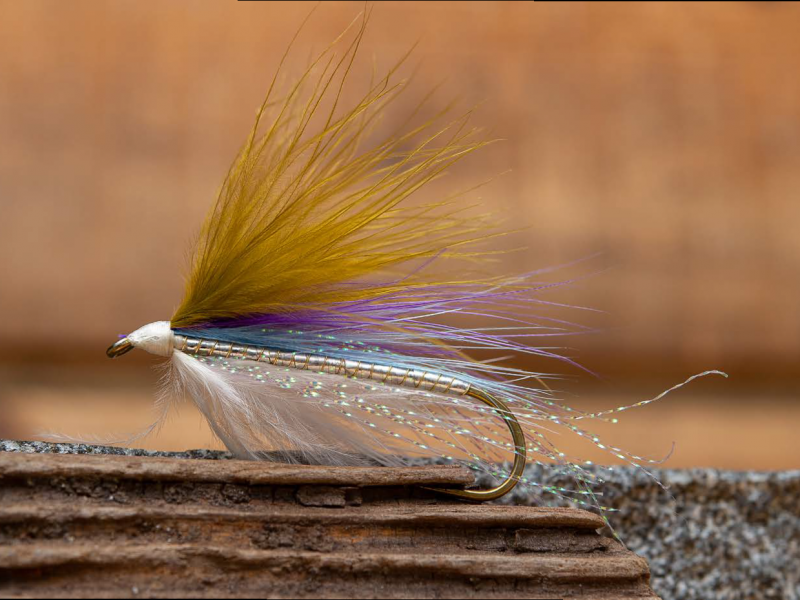 Fish the fly on a semi-dead drift with a little bit of drag to keep the streamer material thinned out like a real smelt.

Bigger is better, right? It’s the American way – unless it means over-dressing your fly pattern. Usually, the “less is more” caveat goes out the window as soon as that big bag of fluffy material shows up on your tying bench. We’ve all been there, but here’s a better solution.

Al Karg runs Soft Hackle Guide Service in Clarksville, New Hampshire, below Murphy Dam. He not only guides, but he also regularly posts river conditions, which bugs are on the water, and fishing conditions. I’ve fished below Murphy Dam but never had anything to report. But, I digress.

Al targets resident brown trout with this streamer – brown trout measured in pounds, not inches. Although the streamer can take fish all year, he likes to use it in the winter and early spring months when smelt are occasionally washing through Murphy Dam. A large school congregates just above the dam and occasionally washes through. Large resident fish are lying in the deep pools below the dam and feed on the stunned baitfish.

He said he can sight-fish to double-digit browns taking floating and drifting smelt in or near the surface. It’s like summer dry-fly fishing, except with streamers on 2 to 3X leaders. He uses a floating line in order to fish the fly at all depths.

Al said, “I use Mustad size 2 R75-79580 hooks: 2XH/5XL. I really like a heavier hook because I’ve had standard ones straighten out on some of the fish I’ve had on. These hooks haven’t failed me yet, though I’m looking forward to the fish that does that.”

He worked on this streamer pattern for five years before he got something that seemed to work. The idea was to represent the blue/purple iridescence in fresh smelt, and his first try was silver mylar and marabou. How did it work? Al said, “I had three three-pound rainbows on three casts, which put me on the right track. I added the crystal flash to get more “shimmer”, but the fish kept breaking the Mylar with their teeth, so I added the wire rib as a reinforcement.”

Al thinks the fly works so well because he doesn’t use a lot of marabou. The white throat extends 3/8 of an inch beyond the bend and each layer of the wing is made with half the amount used for the throat. The crystal flash picks up the colors on the adjacent materials and provides iridescence. In the water the streamer is thin, with plenty of action. Al said, “Most people see the dead-white, 4-inch smelt on the bottom of the river. When they are fresh through the dam, they have a pretty iridescence that I believe the fish prefer.”

Al fishes the fly on a semi-dead drift. A little bit of drag keeps the streamer materials thinned out like a real smelt. On a completely dead drift, it’s just a fluff of feather. He’ll cast quartering upstream to get some depth and try to keep just enough contact to provide the drag he needs.

“My best day,” he said, “was in March. I walked to the head of the pool, put on a fresh 3X leader and a fresh fly. I cast to the first fish and quickly was into a three- or four-pound rainbow. The second was a five- or six-pound brown. The third was a 32-inch brown of 12.5 pounds. All of this took about 45 minutes, then I sat on the bank and watched the fourth fish for about a half hour. It was my best week, my best month, and perhaps my best year to that point. I walked back to the car, went home, and remembered every detail over a sip of Kentucky Brown Water. That was quite an experience.”