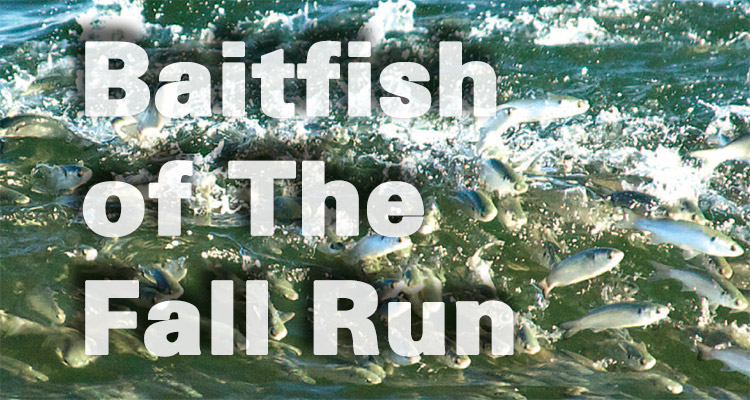 Get familiar with the baitfish of the fall run and finish your surfcasting season strong.

Spurred on by shorter days, cooler water temperatures and changing weather patterns, striped bass, after a summer of indulgence off New England, begin their homecoming journey sometime in September. The “fall run” happens in waves, as all sizes of stripers make the move south, swinging into the coast along the way to feast on the various species of baitfish that hug the shoreline during their own migrations south. Different species of baitfish are abundant at different times throughout the Fall—get familiar with the baitfish of the fall run and finish your surfcasting season strong.

JUVENILE HERRING
SIZE: 1 TO 3 INCHES
Every spring, adult river herring make their way through herring runs and often up fish ladders to reach brackish or freshwater spawning sites. In the fall, young-ofyear herring that hatched in spring begin to flood out of their natal homes and make their first venture into the ocean. Look for bass and bluefish to binge on these outside of productive herring runs and at the mouths of major spawning rivers on a strong dropping tide.

Mullet
Size: 5 to 8 inches
Timing: Early September to Early November
Mullet begin dropping out of the bays in early September. They hug the beach as they move south, often swimming right on the surface. Most early-migrating mullet escape the attention of stripers, since early September ocean temperatures still hover around 72 degrees, or hotter. Bluefish, however, will be in their prime, and anglers can count on 3- to 10-pound choppers to chase the mullet practically onto the beach.

By October, the first leg of the striper fall run will catch up with the mullet run. Ocean beaches from Montauk to Island Beach State Park will come alive with bass and bluefish sending sheets of mullet into the air. Because mullet spend most of their time swimming just below the surface, the best lures to imitate them are topwaters, either cup-faced poppers or pencil poppers, or metal-lip swimmers. Of course you can use the mullet themselves as bait. They work well live or fresh dead for both stripers and bluefish.

Peanut Bunker
Size: 3 to 6 inches
Timing: Mid-October to December
Following the mullet by a few weeks, juvenile bunker, more commonly known as peanut bunker, start making their move along the beaches in October. Peanut bunker vary in abundance from year to year, though it’s almost certain that a few will move down the beaches between Halloween and Veterans Day.

When a big school of peanuts collides with a migrating school of stripers or bluefish, it’s a massacre. The small bunker throw themselves onto the beaches while the bass and blues inhale any baitfish that break off from the school. Like mullet, peanut bunker don’t linger too long in any location, especially once the bass and blues find them. It may take some moving around to hunt them down, but it’ll be worth it once you do. Obstructions to the bunker’s migration, like a jetty or rockpile extending into the surf, are excellent places to locate the baits and bass. Once on the jetty, sit back and observe the water for a minute. Watch as a school of peanut bunker gathers the courage to round a jetty tip, only to be pushed back by a group of stripers waiting in ambush on other side. Swim shads from Tsunami or Storm are a nearly perfect match for peanut bunker, but if the bluefish outnumber the bass by a wide margin, you’ll exhaust your supply of these soft baits pretty quickly. Switch to wideprofile metal lures or swimming plugs.

Sand Eels
Size: 3 to 8 inches
Timing: November to January
While the peanut bunker and mullet are, for the most part, making a steady progression south, sand eels migrate east and west. The cool waters of November pull the sand eels inshore from the offshore lumps where they were the primary food for bluefin tuna over the summer.

Once inshore, sand eels stay rooted in an area for weeks. They’ll hold in the same sand bar, and can provide predictably good fishing at certain stages of the tide. As their name implies, sandy beaches serve as the home base for these slim baitfish. From the South Shore of Long Island to the sands of Long Beach Island, the sand eels dig into sandbars until a dropping tide or breaking waves force them into the trough where stripers lie in wait.

Since these sandbars can often set up a good distance from the beach, lures that cast a long way get the call when sand eels set up in New York and New Jersey. Diamond jigs with tube tails and needlefish plugs both cast well and have the slender profiles necessary to imitate sand eels. When the bait and fish have moved closer to the beach, minnow plugs and slender soft-plastic baits work well.

Bay Anchovies
Size: 2 to 4 inches
Timing: September and October
The most impressive blitzes of the fall are fueled by the diminutive bay anchovy. Forming schools so dense they look like muddy water, a mass of bay anchovies is a bittersweet sight for surfcasters. Stripers keyed on these small baitfish can be difficult to hook on most artificial lures that surfcasters are able to cast.

Yet, sometimes the bass are whipped into such a frenzy, anything you throw into the mix gets bit. Bay anchovies are also the favorite food of false albacore. While shots at albies from shore are few and far between in New York and New Jersey, they do happen, often when anchovies move tight to shore. To pluck a bass out of a bay anchovy blitz, tie on a small bucktail with a trailer. Poppers sometimes work, but for bass with small bait on the brain, a subsurface presentation often does best. A teaser fished above the lure is a good idea too. Blues also like the anchovies, but they will be easier to fool with artificial lures. For the rare instances when albies move within range, a Deadly Dick will get the job done.

Adult Bunker
Size: 10 to 14 inches
Timing: October
While a run of adult bunker can’t be relied on—as it can in the springtime—occasionally schools of large menhaden will remain inshore long enough for a school of migrating stripers to find them. Just like in the spring, bass found around the bunker tend to be big, 15 pounds and up. Pencil poppers, big swimmers and the bunker themselves are the best tactics. If bunker are nearby, don’t overlook fishing chunks of these oily baitfish on the bottom. Some of the biggest bass of the fall will be caught this way.

Sea Herring
Size: 10 to 12 inches
Timing: Mid-November to December
Like the adult bunker, the presence of sea herring in the fall surf is not a guarantee, but when it happens, it usually brings the best fishing of the fall. Sea herring spend their summer far offshore of Northern New England and Canada, and southbound schools don’t reach Montauk until well into November. Many years, the sea herring pass far offshore, trailing a big school of big stripers behind them, but if the stars align and the sea herring schools take a turn to the west, the stripers will move with them, and surfcasters will have one last shot at beaching a fish heavier than 30 pounds. Gannets, the large white birds that kamikaze into the ocean to feed, seem to move with the herring. But don’t let the presence of a few gannets fool you. These big birds are just as apt to feed on large sand eels. However, if big flocks of gannets are around, it’s a safe bet that schools of herring have moved in. Imitate herring with poppers, minnow plugs like the Cotton Cordell Redfin, bucktail jigs, darters and metal lip swimmers. White, blue-and-white, or chrome is closest to the color of these silvery baitfish.

Check Out Our Fall Run Plug Bag Guides To Get You Ready For The Season: