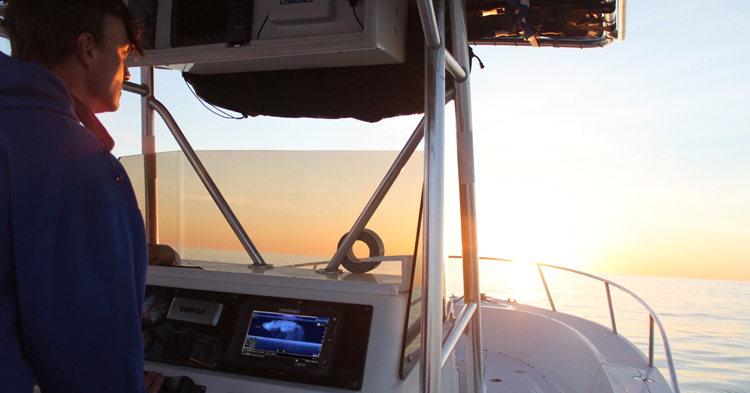 Fishermen, as a rule, are gadget freaks. Every winter at the fishing and boating shows, we carefully study and inspect the newest rods, reels, lures and boating accessories. Some of the latest and greatest gear ends up working better than you could ever have imagined, and some turns out to be far better at catching you with your wallet open than it will ever be at catching our finned foes. Of my burgeoning collection of the latest and greatest, there is one thing that I use every time I leave the dock until the moment I return—my fishfinder.

My boat is equipped with a Lowrance HDS unit that displays a StructureScan HD sonar module. I have been using Structure Scan on my fishing charters since 2010. Back then, I considered it a novelty that I would turn on when I was looking at rock piles and underwater cliff faces. Now, I consider it to be a vital feature.

There are two components to the Lowrance LSS system, sidescan and downscan. The sidescan capability allows you to have far greater side-to-side range for marking fish and the downscan allows you to see what is directly underneath the boat in much greater detail.

All fishfinders operate as echo sounders, which is a form of active sonar. An electrical signal is sent from your fishfinder to your transducer that converts it into an acoustic pulse. A conventional fishfinder broadcasts this pulse straight downward in the VLF and LF range of the radio wave spectrum at 50khz and/or 200khz. This sound wave (or beam) spreads into a cone shape as it travels away from the source, very much like a flashlight projected onto a distant wall. Any object with a different density than seawater, such as a fish’s swim bladder, will reflect back (echo) this signal to your transducer. The fishfinder then calculates the short amount of time between when the three-dimensional cone- shaped pulse was sent and received, and converts it into the two-dimensional image you see on the display.

Scanning sonar works differently in two key ways. The primary difference is that the transducer broadcasts a very narrow beam, both straight down and side-to-side, instead of the traditional cone shape. This means the display is receiving a nearly two-dimensional signal, allowing for a much more detailed display image. Secondly, the transducer operates at a higher frequency, which generally means greater resolution. These two significant differences are what allow for such vivid imagery of both structure and fish.

I make sure five things are visible on my display as I leave the dock: the chartplotter, both 50khz and 200khz traditional sonar, down-scanning sonar and side-scanning sonar. Each of these tools tells me different things in different ways and using them in concert allows for the greatest understanding of what’s beneath.

I am often asked at seminars how to get a fishfinder “tuned in.” My best advice is to tune your fishfinder when you are on fish. I am fortunate to have resident schools of small baitfish in my marina all season long. I always monitor my electronics as I leave the dock and make small adjustments to be sure that the resident herring or small bluefish appear clearly and vividly on my devices. Training your eye for what different fish look like at different depths is always valuable practice. Another good trick is to stand at your stern while casting into active fish and watch how they appear on your electronics.

Most displays can be customized in frequency, appearance and range. My preference is to run my StructureScan with a blue/white color scheme at 800khz. This setup allows me to see targets best, and I have also learned that even colorblind clients are usually able to make out the fish that we mark. I manually keep the down-scanning sonar zoomed to the same depth as the traditional fishfinders for easy side-by-side comparison. The side-scanning sonar is displayed full width on a 10-inch display. I find that keeping the range at 80 feet on each side allows me to see an individual striped bass and a school is easy to spot. The only time I zoom out farther, to 120 or 150 feet, is when I am looking for schooling fish like mackerel.

Having side-scanning sonar provides a huge advantage when catching bait. Mackerel are usually found outside of the outer islands of Boston Harbor near underwater structure. I will go to a likely area and begin a search pattern. Once I mark a school, I move the cursor on my screen over on top of the school and set a waypoint. The down-scanning capability allows you to see the individual fish in the school of bait once you reposition the boat. You can then look at exactly the depth that fish are holding and drop your mackerel rigs to an exact strike zone.

The hardest part in catching pogies (menhaden) is finding them. The telltale “flip” in the water giving their location away is absent most days. The side-scanning technology allows you to dramatically broaden your range while searching for these baits. I usually widen the range to 120 feet on each side due to the fact that pogies always travel in schools and appear vividly on the screen. Once they are marked, you can drop your net or throw a snag hook knowing that you are on the bait.

The cone of the beam of a traditional transducer is measured as cone angle. Most current traditional 200khz transducers have a cone angle of much less than 20 degrees. This means if you’re fishing in less than 10 feet of water, the cone diameter on the bottom is less than 3 feet. You’ll be lucky to have a fish come into range at that depth. Side-scanning capability will give you significantly more range as it projects well beyond the limitations of traditional transducers.

My Lowrance StructureScan unit allows me to view both sides or just one side at a time. If you’re running along a rip line or casting into a shoreline, you can set the device to look only into the shallows. This allows you to set the range to well over 100 feet to the side and still make out important detail. You can also look for offshore weed lines with this method. When you approach a likely area, set the device to one side and look several hundred feet for a steady line. The weeds and all of the trapped debris will be enough to create a noticeable mark on your screen.

The primary forage fish in the waters I fish are mackerel, menhaden and river herring. On traditional sonar, you will see a red blob that lets you know there is a school of fish under the boat. You can then attempt to make an educated guess based on water temperature, location and size of the school. Scanning sonar solves most of the guesswork for you. Mackerel typically appear in schools of 10 to 50 individuals and look like a loose ball of white dots. River herring are typically found in massive, tightly packed schools that appear onscreen as a giant wave of dots. Menhaden look larger and more tightly packed than mackerel. A striped bass looks like a small, white ¼-inch line. A school is far more obvious. It may not seem like much but becomes easy to spot once you’ve trained your eyes.

Every harbor has humps, bumps, channels, edges and other structure that typically hold fish. The side-scanning sonar affords me the ability to approach a structure and scan until I find whether the fish are holding in the shallows or the depths, and on which side. I can then set a drift and rig the rods for how the fish are holding in that moment rather than blind-casting to a spot. You can also determine the exact depth by moving the curser over a marked fish and then drop your lure to the strike zone.

Everyone loves to see surface-feeding stripers. The fishing is easy and fun until the fish go back down. With the side-scanning sonar, I can see which side they moved to and tell my clients, “Cast to the left side.” There have been many times when we were able to stay with an active school long after the fleet gave up on the fish returning to the surface.

Good things don’t come cheap, and new marine electronics are far from the exception. That is the only downside that comes to mind when I describe my experience using an upgraded fishfinder with scanning sonar. However, I can tell you that having this equipment onboard has made my fishing charters more efficient, enjoyable and successful. I couldn’t be happier with the investment.

Captain Tim Egenrieder is a lifelong avid angler and the founder of AnglerFish Guides, a Boston fishing charter service.