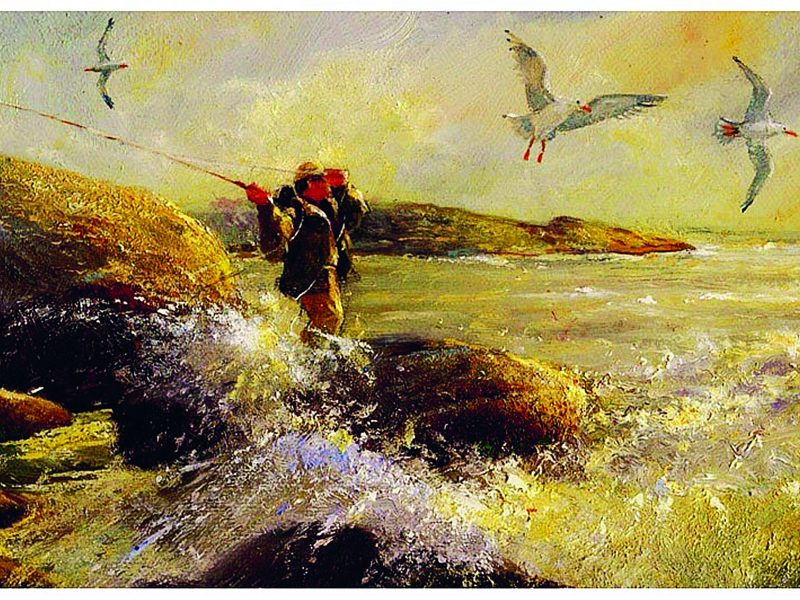 Luther Kelly Hall grew up in Pennsylvania, mainly fishing the freestones around Williamsport. During his first fishing experience with his grandfather, he used a cane pole to catch bluegills. According to Hall, since that day his life has been “an ongoing tapestry of angling and outdoor adventures that have taken me to beautiful places and introduced me to some very memorable characters.”

His studio is located in an old foundry surrounded by marinas, a bait and tackle shop, lobster boats, fishing guides, an old “fisherman’s bar.” It is a 100-yard walk to the Atlantic Ocean, “the backdrop and the centerpiece of much of my dramatic sporting images,” says Hall.

“Whether in pursuit of Atlantic salmon on the Miramichi or casting the windswept and wave-swept rocky precipices of Atlantic New England for stripers, or even angling Central Pennsylvania’s limestone spring creeks, I gather the visual and sensory material for my saltwater and freshwater fly-fishing portrayals,” Hall says.

“The fly-fishing experience, the drama, the adventure, the comedy, and the serenity of those experiences have become the primary framework of my paintings,” Hall explains. “Montana’s Madison River, Yellowstone National Park’s Slough Creek, Pennsylvania’s Spruce Creek, Quebec, Canada’s Grand Cascapedia River, the Cains and Miramichi rivers, and Atlantic Coastal New England are my most portrayed waters.”

Hall maintains an ongoing, working, contributing association with the Miramichi River Salmon Association, which has honored him for contributions to Atlantic salmon conservation and the Connecticut River Salmon Association, which named him the Sporting Artist of 2013. Hall has served on the boards of directors of multiple saltwater angling and conservation organizations in southeastern Connecticut.