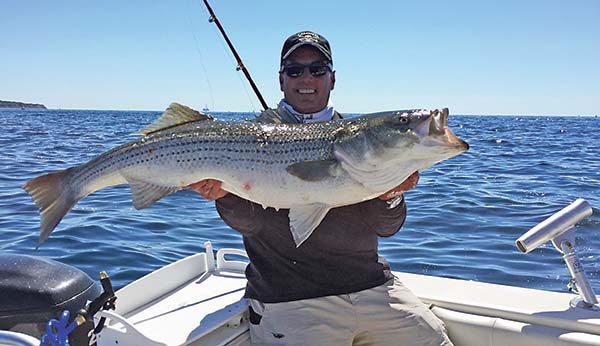 Trolling, while being one of the most effective ways to catch big striped bass, has a bit of a PR problem among anglers who were introduced to the tactic more than a decade ago. Back then, striper trolling was done with broomstick-stiff rods and tuna-capable conventional reels. Combined with a spool of wire line and an umbrella rig, and the entire outfit weighed more than a keeper-sized striper. The heavy tackle was cumbersome to use and deadened the fight of the fish, turning many fishermen off to trolling.

As thin-diameter braided lines like PowerPro became more prevalent, tackle manufacturers began developing rods and reels that were small in size and light in weight, yet still capable of taming big fish. This happened first with inshore light tackle and surf gear, then moved into offshore jigging and popping tackle, and bottom fishing. Finally, the small-but-powerful tackle trend made it to the striped bass trolling scene. As trolling tackle became lighter and easier (read: more fun) to fish, fishermen who’d previously pooh-poohed trolling as boring, found themselves setting out spreads and catching more and bigger stripers.

One of the reels that has helped along this striper trolling renaissance is the recently redesigned Shimano Tekota A.

The Tekota series of reels have a long history as a reliable levelwind trolling reel that fishermen could count on in their spread season after season. While maintaining that trusted durability, Shimano has updated the Tekota, turning it into a small-but-strong trolling reel capable of fishing freshwater, saltwater, and even bluewater.

This lighter, more ergonomic S-compact body design is easily palmed while cranking in 38 inches per turn of the reel handle. The 6.3:1 gear ratio strikes a perfect balance for trolling with enough speed to rip in the spread, and enough power to handle the heavy resistance of a deep-diver or the serious weight of a mojo.

The Tekota A is more rugged than its predecessors thanks to Coreprotect, water resistance, and the rigid Hagane Body. The metal, impact-resistant Hagane body eliminates distortion and flex during the retrieve—which is especially important when cranking in 32-ounce mojos—protecting the reel’s interior from unexpected impact. Both of these features help the Tekota A maintain smooth operation through many spring and fall runs.

The Tekota A comes in two sizes, the TEK500 and the TEK600, and both have left-handed models (TEK501 and TEK601). The Tekota A LC models come with a line counter, allowing fishermen to set out precise amounts of line when trolling. Line-counter reels are very popular in freshwater trout and salmon trolling, but are underutilized when trolling in saltwater. Fishermen trolling tube-and-worm rigs and deep-diving minnow plugs can fish their offerings at precise depths by knowing how much line they let out.

Lastly, when a striper strikes, the Tekota’s extra-loud clicker cuts through the engine noise and crew conversation to signal that yet another trophy has been hooked on the troll.