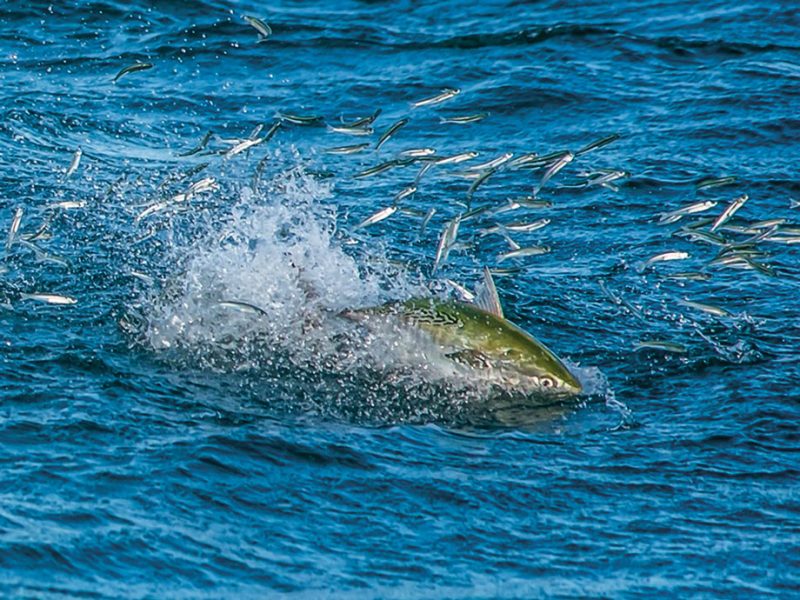 False albacore have a reputation for being speedy, hard-fighting, and unpredictable. Watch a school from a boat or beach and they always seem to be headed somewhere fast. This is especially so during their fall migration, when these speedsters are trying to jam as many tiny baitfish down their throats as possible before colder weather forces them further south.

Fast, pretty, and exceptionally powerful for their size, false albacore are the most widely distributed members of the tuna family in Atlantic waters. You can easily distinguish them from other small tunas by the wavy, vermicular markings along their backs. They also have a series of dark spots between the pectoral and ventral fins and below the lateral line, not present on any of their closest relatives along the Atlantic coast. Though some anglers have been known to eat these unmerciful baitfish chasers, most release all they catch.

While the general perception of these far-ranging members of the tuna family is that they are here now, gone in a flash, some areas hold them longer than others. Along stretches of open beach, false albacore may double-back a couple times before moving on, but the action is generally short-lived, so it’s best to stay put and wait for the next pod to come though. For prolonged encounters with these fish in greater numbers, however, there are a few specific types of structure where you can hang your hat. Stake out these potential albie hotspots and you may find hours of action instead of minutes.

Entrances to bay and harbor waters create a natural chum slick on dropping water, which is a primary reason why false albacore are drawn to inlets and harbor mouths on a regular basis. At the start of an ebbing flow, albies often set up tight to the mouth of such a spot and begin moving into the tide to greet baitfish being swept out toward deeper water. As the tide continues to increase, they’ll invade rips and eddy waters within the inlets, gorging for a short time before dropping back outside as the current begins to push at full strength.

“I love fishing inlet jetties for false albacore,” says Jeff Lomonaco, a member of the White Water Outfitters crew in Hampton Bays, New York. “If you get to know an inlet well, you’ll find that albies often stack up in the same spots on the same tidal stages from year to year. This gives you an opportunity to set up before the bite even starts if you know some fish have been coming though.”

Lomonaco, who favors fly-fishing for little tunny when conditions permit, likes to position himself along jetty rocks where he finds an eddy. Usually, he says, that’s in an area where the jetty curves or protrudes into the current, or near its tip. Here, he’ll cast small epoxy minnow patterns measuring 1½ to 3½ inches long, with tan over white or pink over white his favorite color combinations; occasionally, he’ll toss a small Deceiver pattern.

“I’ll blind-cast if I see anchovies or rain bait starting to pile up,” says Lomonaco. “Even if nothing is biting, I at least know I’m in good position for when the fish finally appear. These spots are also good for other predators like stripers and bluefish, so every cast brings the opportunity to connect. If the albacore aren’t showing or don’t seem aggressive, be sure to let your pattern swing fully though the eddy waters before making your next cast.”

Some of my favorite false albacore intercepts are long, sloping points. These can be especially productive if situated near a long stretch of straight, nondescript beach. Points that spill out into the water, often for hundreds of yards, act as a natural feeding and re-grouping point for albies on the go.

In my experience the higher the point sticks out of the water, the better. Cliff areas that jut out into 20-, 30-, or 40-foot depths are prime, as is any significant point bordered on both sides by stretches of beach sporting sand, gravel or small stones. These slopes are even better if you find large boulders at their bases since the likelihood is that more boulders might be submerged well off the beach.

Jutting out as they do, long sloping points block the path of baitfish schools and turn water back in large eddies while deflecting other water out toward their tips where it can finally roll past. This pulls, pushes, drags and confuses baitfish schools in unpredictable ways, providing a big advantage for powerful swimmers that can slice through the schools in any direction.

Frequently, wind and tide pile sand eels, anchovies, and spearing in a cove on one side of a slope, then swing the feeding frenzy around to the opposite side when the tide flips.

Expect currents to be strong in such situations when the bite gets underway. Spot a seam where the albies seem to be surfacing on a regular basis and drift through. If shallow or in serious rip currents, designate a qualified driver for each pass and take turns casting. You may need a little extra weight to keep your albie offering just below the surface in the strong currents, so opt for tins or small bucktails tipped with 3- to 4-inch flat-tailed soft-plastics such as Fin-S-Fish, Bass Assassin, Panther Martin Big Fin, or Berkley PowerBait Saltwater Jerk Shad.

Slopes are easier to work from a boat, but the base of any slope can also be a great intercept point for surfcasters. Rather than push right up against the protrusion, however, pick a spot between 200 and 400 yards up-current and start there. Often, the albies begin to deflect toward deeper water before coming tight to such structure.

For shore anglers, larger slopes are obvious ambush points, but don’t overlook smaller rock groins. If positioned along a nondescript beach in the shadow of a major slope, they can hold bait for prolonged periods, which makes them spots worth inspecting for albies. The predators, in this instance, drive baitfish schools against a groin – or between two such structures positioned closely together – and make continual passes until the bait finally finds a way to escape.

Shoals positioned in deep water well off the beach are another calling card for fast action with albies. As with slopes, baitfish get caught in the current rolling around the structure and lose the ability to effectively maneuver out of harm’s way.

On The Water columnist Angelo Peluso loves to fish these setups. In fact, he’ll look for them first when his usual shallow-water haunts fail to live up to expectations.

“I try to pinpoint where the current around a shoal starts to pick up steam and concentrate my initial efforts there. If you look carefully, you’ll find seams where the current is flowing faster than the surrounding water. Position your vessel slightly up-current/upwind from there and drift back into what you hope will be albacore mayhem,” advises Peluso.

As a rule, Peluso favors outgoing water for working around shoal areas because he believes it does a good job of sucking baitfish off the humps. His favorite situation is when the wind blows up against an ebbing tide and begins to make the waves stand up. Under those conditions, he says, “False albacore can lose their minds and just go wild.” Most of the time, the fish set up right along the inside or outside edges of shoal waters, although sometimes they favor the back where the depth begins to fall off.

“Don’t overlook the possibility of the albies herding bait into the shallowest, calmest spot on a shoal,” adds Peluso. “In calm seas, they’ll sometimes choose to work in shallow water rather than fight the current in deeper areas.”

Like Lomonaco, Peluso often chooses his fly rod for targeting albies, although he is more prone to do so on shallow flats or tight to the beach. For fishing in shoal rips, he suggests using spinning tackle to throw lures into the most roiled water you can find. If the fish are lit up, he concludes, just about any albie lure that can get down a couple inches below the surface is worth a shot.