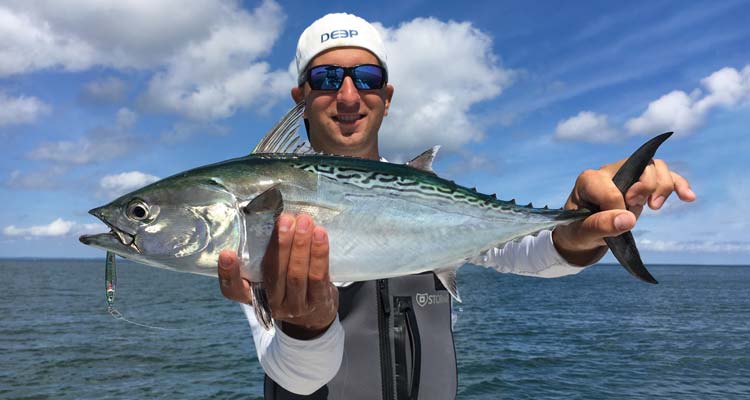 Pictured above: You don’t need a net to deck a false albacore. The tail makes a great handle to lift one of these powerful speedsters aboard.

Smack! I hadn’t turned the reel handle five times before the crushing strike hit. Now, as an 8-pound false albacore powered away in the general direction of New London, Connecticut, I couldn’t believe my luck. A glance around revealed no anglers in any direction and several separate pods of fish tearing through the surface in pursuit of bay anchovies. For the next 90 minutes, I had the fish all to myself with no run-and-gun skippers to put them down. It was one of my finest days on the water.

There’s something about false albacore that gets my blood boiling. Sure, they fight hard, sizzle on the run, and can be caught on both fly and spinning gear. But, there’s another reason I love them—they can be exceptionally selective. One day, they’ll hit everything from small surface poppers to metal tins; the next, they want only a size 2 olive-over-white Epoxy Minnow at the very end of a dead-drift cast. Most of the time, they loiter somewhere between these two extremes, but even then, it often takes a little experimentation to figure them out. You must earn these fish on a daily basis and I relish that challenge, no matter how maddening it can be.

False albacore are relatively easy to connect with at the height of their run, when the bait is packed tight and fishing is on fire. Frustration levels rise at the start and end of the run, and when relentless fishing pressure takes the edge off the action. With that thought in mind, I made a few phone calls, looking for a little extra albie advice, and found plenty. Following are a few of the highlights from little tunny experts up and down the coast.

Capt. Jim Barr of Skinny Water Charters likes to target false albacore in Rhode Island waters where other anglers fear to tread. When the fleet starts chasing down the albies and busting up the schools, he’ll head tight to the shore.

“I fish mainly in the Newport area,” he reveals, “but I’ll head west to Point Judith or east to Sakonnet Point if need be. The action starts here around September eighth or so, with the first two weeks of October bringing prime time. The build-up here occurs as catches off Martha’s Vineyard begin to decline, so you can time it pretty easily from the reports.”

While most anglers are targeting larger pods of fish well off the beach, Barr pushes his 22-foot Mako inshore bay boat tight to the surf and rocky shorelines, using both his main engine and a 101-pound-thrust MinnKota electric trolling motor to maneuver carefully in 4 to 15 feet of water. He fishes along the ledges at Brenton Reef as well.

“A lot of times, the fish in these shallow waters don’t show on the surface,” relates Barr. “So, to locate them, I’ll drag something big behind the boat like a Rebel Jumpin’ Minnow or an Albie Snack. When a fish comes up and smacks it, I’ll double back and often find nice-sized albies below the surface without any birds or surface splashes to give them away. Often, these shallow albies don’t even show up on my electronics.”

Another trick Barr uses to find secluded albies is probing the pockets along the South Ferry cliffs. “If you have a boat that can run shallow and has enough power to stay out of trouble, you can get close enough to easily drop a fly in some of the pocket water here and work some fish that see very little pressure.”
Both the shallow approach and fishing cliff pockets require a thorough knowledge of the waters you’ll be fishing, solid helm skills, and a dependable motor, cautions Barr. Stay with the fleet unless you are 100% sure your vessel and crew are up to the challenge.

“Fat Albert really can test your patience,” says Scott Worth of North Fork Light Tackle, who targets albies anywhere from Orient Point and Gardiners Bay to the waters of Shinnecock Inlet. “It is amazing how they can react so differently from day to day.”

Worth pursues albies using both fly and spinning gear. “For me,” he says, “they each have applications, so being armed with both increases your options. With the spinning gear, I can throw a variety of small tins. This is great when fishing blind, working in choppy seas, casting from afar if the schools are skittish, or when I need to get something down below the surface in front of fast-moving fish.”

The method of ambushing rather than pursuing false albacore makes a lot of sense early and late in the season when the schools are scattered. Worth watches the area around the boat or checks his GPS recorder to identify a spot where the fish seem to surface repeatedly. He’ll then get up-current or up-wind and drift in quietly. In this way, the schools aren’t disturbed and will keep busting bait on top.

“Boats that run from one school to the next don’t understand that all the noise puts the fish down,” says Worth. “Even if you cruise around the outside of the action to reposition, you’re still breaking up the bait. Once the baitfish schools begin to disintegrate, so does the albie action. Use an ambush approach whenever possible. If the fish are rising, a pod will eventually surface right next to your vessel, so you can actually have the best of both worlds with this maneuver.”

While most albie fans between Cape Cod and Sandy Hook target false albacore within sight of the beach, Capt. Dave Riback of Purple Jet Sportfishing Fleet in Point Pleasant, New Jersey, does things a little differently.

“We’ll run several miles offshore looking for clear water, and drop the hook,” he explains. “Then, we’ll get a little bunker chum going over the side and let the albies come to us. Clean and green is the water color we are looking for; clean and clear is even better.”

It’s important with this method, notes Riback, not to overfeed the fish. A five-gallon bucket of bunker chum, with a few spearing chunks tossed in for good measure, is all you need. Once the fish are feeding in your slick, you can tempt them with 007 diamond jigs, small Kastmasters or 5-inch split-tail soft plastics in pink or black back/silver belly.

“We like to work a soft plastic like a bucktail,” adds Riback. “Let it sink a bit, then whip it up; turn the reel handle only 1/4-crank to take up slack line as the lure settles on the drop.”

This is indeed a different approach compared with how most anglers chase false albacore, but Riback says it works so well that he even schedules a few trips each year on his open boat, the Queen Mary.

Party boat albies? That’s got to be a ton of fun!

Capt. Jim Levinson of Fly Fish Montauk specializes in targeting false albacore in the waters around Montauk each fall with both fly- and spinning gear. “It’s amazing how consistent the albies are in terms of peak activity here,” he states, “but I have noticed a slight shortening of the season at both ends in recent years.”

According to Levinson, mid-September through mid-October is period for maximum albie action within sight of Montauk Lighthouse. “Don’t worry about chasing the reports,” advises this highly experienced guide. “If you head out here at the peak of the season, you should have no problem finding the pods.”

When it comes to targeting albies on the fly, Levinson is clear about his favorite choice in most conditions: a size 2 Glenn Michelson Epoxy Minnow. For generating surface strikes, he’ll go with a Crease Fly. For spin fishing, he favors Albie Snacks and Deadly Dicks.

“It’s important to bring a few choices,” explains Levinson, “because these fish can be fickle. On the shy days, flies seem to work best. When the fish are really hot on the bait, though, you can’t go wrong with spinning gear.”

“Whether tossing lures or flies,” advises Levinson, “it’s vital to bring your line tight as quickly as possible after it hits the water. With spinning gear, flip the bail and start reeling just before your lure hits the water. With fly gear, don’t let go of the line at the end of the cast. Instead, pull back as the fly lands to start your retrieve immediately. If your cast it perfectly, an albie will be on your lure almost instantly. If there is any slack in your line at all, he’ll spit it out before you even know the bait was in his mouth.”

One thing just about every albie expert I spoke with stressed is the need to keep switching things up if you aren’t connecting or the bite suddenly seems to shut down. Some days, these fish will want flies and lures moving at breakneck speed; other days, they’ll want your offering to ride a few feet below the surface or be presented on a dead drift. Start with the usual lures and retrieves, but don’t stick with any one presentation if it doesn’t bring results.

Indeed, that’s been my take on albie fishing for over 30 years. Lead with what worked best last time out, but cycle through your standard lures, flies and presentations throughout the day. If you still can’t connect, try something radically different.

On that fantastic albie day described earlier, I failed to mention I had the fish to myself for over an hour before I finally got one to strike. With pods of 6- to 8-pound albies thrashing all around my boat, I couldn’t buy a bite on a Deadly Dick, Hopkins Shorty, Albie Snax, or Fin-S-Fish. In desperation, I tied on a bare ¾-ounce jighead and added a white 4-inch Gulp Swimming Mullet pulled from my fluke bag. Cranking at a medium speed, which kept the lure well beneath the crashing fish, I connected on my first four casts after making the change!

Even more amazing, I haven’t caught a single albie on that rig since.