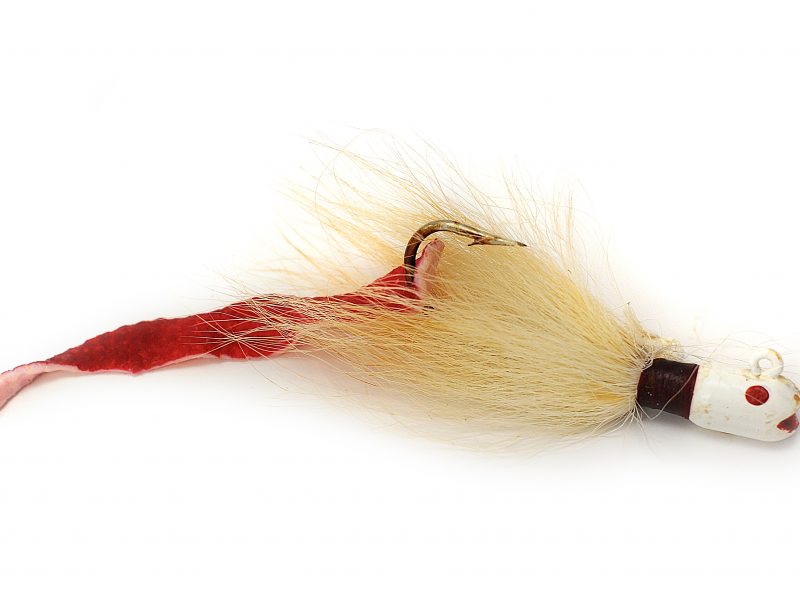 Though, it may seem a bit far-fetched, many of the striped bass I’ve landed from the beaches of the Northeast have been the indirect result of a frog shortage in Wisconsin during the summer of 1921. Let me explain.

You see, long-time fishing buddies Urban Schreiner and World War I veteran, Allen P. Jones were both very fond of using live frogs as bait. When fishing season rolled around in 1921, the two planned to spend much of their time catching black bass in Wisconsin’s Jordan Lake. They liked to cast plugs during the morning and evening hours, and fish live frogs during the middle of the day when the bass became unreceptive to artificial lures. That summer, however, frogs were tough to come by around Jordan Lake, and with these amphibians being the best way to catch bass during the heat of the day, Jones and Schreiner contemplated how they might be able to “create” their own frog from some other materials.

The quest to make their own frog brought them to a butcher in Oxford, Wisconsin, where they took a slab of fatback with the rind on, and cut from it a number of frog-shaped pieces. Throughout the summer of 1921, the two experimented with the shape, looking for one with sufficient tail action and enough meat for the fish to smell and the angler to cast.

The bait turned out to be so successful, that in 1922, Jones and Schreiner founded the Uncle Josh Bait Company in Fort Atkinson, Wisconsin to sell their pork rind creations. Jones’ “day job” was at the Jones Dairy Farm, where he slaughtered hogs and made sausage. This made starting a new company that made baits from raw pork rind a relatively simple leap.  The company was named for a farmer on Jordan Lake who reminded Jones and Schreiner of one of their favorite comedic characters, Uncle Josh, a rube with a penchant for fighting.

The first order was for $300 worth of the model now called the #11 Pork Frog. By 1923, the company offered several other baits, a bass and fly strip, which consisted of just the pork skin, and a “chunk,” which was an oval-shaped bait made up of both the skin and the fat. The original baits were white, but Jones worked with a dye to turn the skin on some of the pork frogs green, although getting the dye to stay on the skin was problematic.

In addition to setting the dye, the greatest challenge for the Uncle Josh Bait Company was figuring out how to properly cure the pork back fat and skin so that it wouldn’t spoil. Though Jones had experience curing bacon on his family’s dairy farm, curing the pork baits proved to be a bit more difficult, and once packed in glass jars, the baits would spoil and reek.

They did eventually figure it out. The Uncle Josh Bait Company would put 3-foot-long slabs of fatback through a 2-week-long curing process before cutting them into baits and dying them. The baits were then packed into jars filled with a salt brine, which simply consisted of a heavy dose of salt and water. 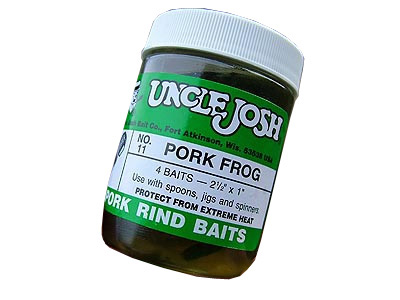 On the water, most Uncle Josh baits work best when paired with another lure to give it more action. One of the most popular combinations is the “jig-and-pig” in which an Uncle Josh pork frog is married to a skirted bass jig to make it resemble a crayfish underwater. A saltwater version of the jig-and-pig consists of a bucktail jig tipped with a pork rind strip. A variety of sizes and styles can also be added to spoons and spinnerbaits in freshwater, and umbrella jigs, tube lures an even spreader bars in saltwater. The skin of the pork undulates tantalizingly on even the slowest retrieves, enticing a large number of gamefish in a variety of situations. The addition of the pork also causes the lure to sink more slowly, making it linger in the strike zone on the fall and allowing for slower retrieves.

Tipping lures with pork rind instead of soft-plastic baits had a number of advantages. Though soft-plastic baits are easier to store and come in a greater variety of colors and shapes, even the most supple soft plastics can’t match the action of a pork rind fluttering through the water. Natural products will always appear more life-like underwater, ask any fly tier, and pork rinds are no exception. Pork rind baits are also much more durable than their soft-plastic counterparts. While even a glancing blow from a bluefish will render any soft-plastic bait useless, I have never had a single pork rind chopped by the yellow-eyed devils.

Just don’t forget to remove the pork rind from your hook and return it to the brine-filled jar after each trip. Otherwise, the bait will shrivel up and harden. This advice should be filed under the “Do as I say, not what I do” category, since I neglect to remove the pork rind from my bucktails so often that I think I could reconstruct an entire pig from the dried-up 70-S Striper Strips littered throughout the back of my truck. But, if you can remember to restore your baits to their jars, a single pork rind will survive weeks, even months, of heavy fishing. 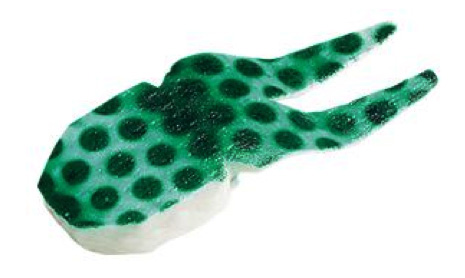 Unfortunately, in mid-December of this year, word began circulating that Uncle Josh would no longer be producing pork rind baits. The issue, explained a company representative, is that Uncle Josh has been unable to get the quality fatback they need to produce durable pork baits. These days, pigs are brought to slaughter at 6 months old, rather than 2 to 3 years old, which means the skin and fatback are thinner and no longer suitable for fishing baits. There is still Uncle josh available for purchase on their website, and at tackle retailers throughout the Northeast. Once it’s gone, it’s gone. Just be sure not to let your remaining pork rinds dry out on the hook.