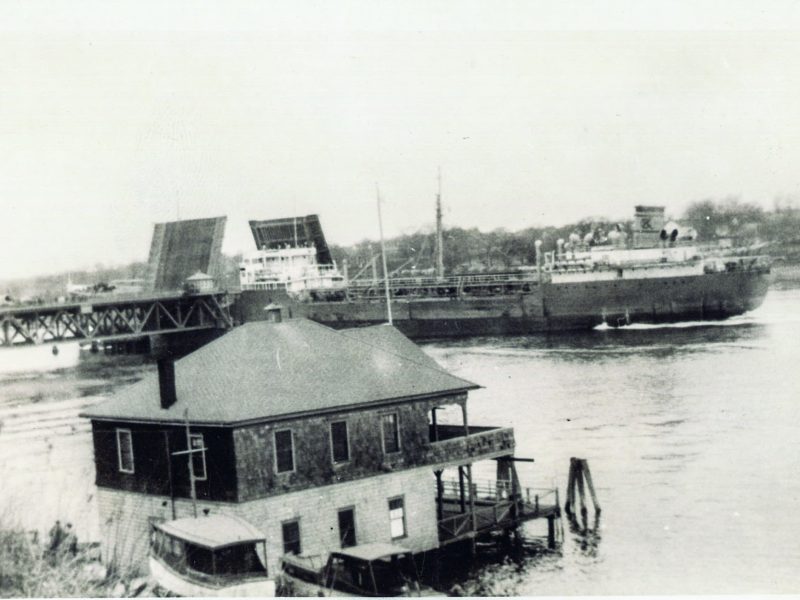 Located on the Taunton River in southeastern Mass., the Weetamoe Yacht Club had only one yacht and a fleet of small wooden skiffs owned by rugged blue-collar watermen. It was where the author learned about fishing, boating, and earning a living in a world where nothing came easy.

Without a trace of smoke from the brick chimney on that frigid December morning and not a single familiar vehicle at the top of the staircase leading to the shore, there was little promise of a warm welcome at the club. I almost turned away and headed to the comfort of the diner, but decided that since I was there, I would at least try the door.

The door opened into the chilly entry between the kitchen and the upstairs reading room, and I called out, to no avail. Climbing the stairs, I heard a noise that I identified as snoring. When I reached the landing, I saw Bento wrapped in one of the thick olive-drab moving blankets the oldtimers used for comforters, only his face visible and snoring up a storm. His nose and lips were a bluish tint, so I hunted around the wood box, but found only a few splinters. We needed wood to chase the chill and dampness from the room where the odor of musty books and mildew filled my nostrils. The adjacent shores usually provided us with a wealth of hot-burning driftwood, but there were four other boathouses in close proximity competing for fuel, so my previous two forays had only produced enough wood to warm those sitting close to the stove. Very carefully, I woke the old-timer. He awoke slowly, shivering, as an awareness of his circumstances took hold.

“What time is it, boy?” The rusted wall clock read 6:45 a.m. on that Saturday morning. “Damn, I fell asleep. I ran out of kerosene at home and thought one of my mates would be here beside a roaring fire, but they have wives, families, and warm apartments. We need some hot coffee, but I don’t have a nickel to my name until Monday afternoon when my check arrives.”

The old saw about being so poor as to not have two nickels to rub together came to mind. The old man and I were both broke! I thought about the aroma of bacon, eggs, and home fries on the grill at the Bridge Diner and hoped that Cynthia might be working. I told my old friend to stay put and I would be back with coffee and food.

I ran out the door, and headed for the steep banking along the bridge that led to the diner. Cynthia was sitting on the last stool facing the window, an unfiltered Lucky Strike hanging from her lower lip as she gazed out on the calm waters of the Taunton River. The stout waitress with the million-dollar smile greeted me in her usual friendly manner and asked if I had an order for her. As soon as I explained my errand of mercy, she ground out her cigarette and put her arm around my shoulder.

“Russ [the owner] likes you, so he won’t have a problem with me extending you credit and adding a hot chocolate and donut.” I sat at the counter as the short-order cook grilled the bacon and egg for the toasted sandwich while Cynthia poured the beverages.

“Haven’t seen you around in a while, but I realize the members have hauled out their boats and not many of them visit the club during colder weather. You tell that old-timer the folks at the Bridge Diner would never let a man starve or go without.”

There was a spring in my step as I headed back to the club with life-sustaining nourishment for my old friend. That old man was special—he had given me my first decent crab net and helped me sand and paint the oars the club’s caretaker had given me for Christmas a few years ago. His eyes lit up when he saw the brown paper bag in my hand. The food and hot drinks led to a discussion that dwelled on Christmas, which was less than two weeks away, and our dire financial straits. The old man’s color was returning, so I told him that without any wood for the fire, and none to be found on our shore, I was going to launch the small plywood skiff sitting outside and row across the river to collect driftwood on the opposite shore, but Bento nixed that idea. 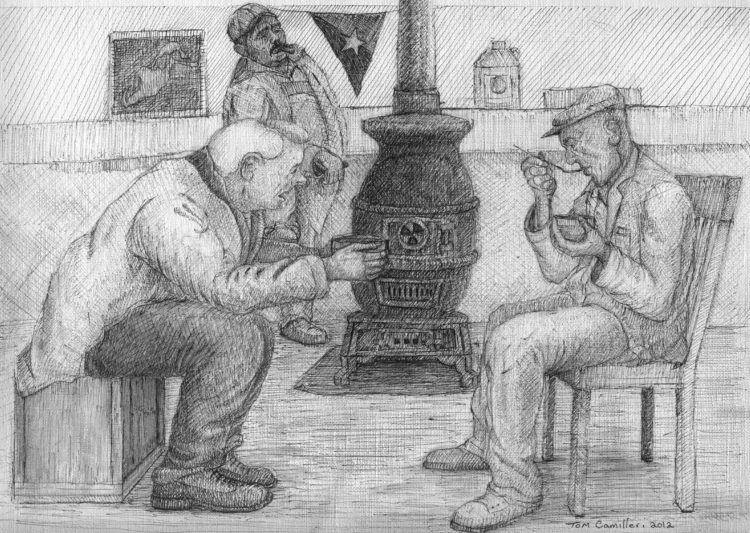 “Hold on, boy. There isn’t anyone around or on the river, so if you get into trouble on the way over or back, you’d be out of luck. We can do without a fire.” He was the voice of reason, but I was a bulletproof teenage boy without his experience or understanding of the potential danger. I went into the locker room and picked up the pair of oars left unlocked for emergencies. I flipped the light dingy over and dragged it to the shoreline, where I locked the oars in place and pushed off the beach. It was dead cold but calm as I cleared the breakwater and rowed my way out toward the channel of the deserted river. That light little skiff could skate, but she was tippy, and all the weight had to be dead center over the keel. The tide was low and incoming as the bow scuffed the gravel beach under the overgrown banking on the far side of the river. I slipped the oars, hauled the skiff up onto dry land, and began the hunt for firewood.

The rocky Somerset shore, unlike the urban side of the river where the club was located, was seldom explored by foot traffic and only occasionally by clam diggers who arrived by boat. As soon as I secured the skiff, I saw driftwood piled up against the high-tide wrack line and up in the bushes where the wind and waves had scattered it. Much of that wood was too big to put into the little boat, so I concentrated on the biggest and driest stove-sized pieces I could stuff in the boat. They would easily fuel a warm fire for my old friend who was sitting in a room that felt more like a meat locker.

I crammed the wood into every open space, leaving just enough room for me to board and row back across the river. Once I pushed off the shore, I noticed I had but a few inches of freeboard, so I prayed no boat tossing a big wake would make its way upriver or I’d be swamped. As I approached the club, I heard a voice calling out to me. It was Arthur, a retired dockworker who was waiting at the shore to help me beach the skiff and offload the wood. We piled the first load on a heavy piece of canvas and dragged it up the stairs, he at the head and me grasping the rear of our makeshift wood carrier. Our formerly frigid friend, warmed by his hot coffee and sandwich, looked on approvingly as Arthur began rolling up newspaper while I used the sharp camp axe from his locker to chip away shavings to make kindling. In short order, we had a roaring fire in the potbellied stove and I pushed Bento’s chair close enough that he complained about his beard being singed.

“He must be warming up because he’s back to complaining,” said Arthur. We sat around the glowing stove while a black kettle spit water, discussing our prospects for the upcoming Christmas holiday.

Not only was I broke, I was also in debt to the diner. However, by the following weekend, I had accumulated two dollars from odd jobs and running errands for the carpenters at Clarkson’s Boat house. I walked into the diner and was greeted by Cynthia with a hug and a big, wet kiss. She smelled of perfume and brandy as she and a few customers at the end of the counter were getting a head start on the holiday. “You’ve been laying low, haven’t you?”

I attempted to explain that I had to earn the money to pay her, which brought about a compassionate response. She beamed that lovely smile and told me that Bento came in a few days after that, paid the tab, and insisted she accept a dollar tip.

“Don’t you ever stay away from here because of money. I’ve got something for you from the boss. Some guy came in a few months back and traded him this rod, reel and box of sinkers and hooks for a meal and to erase his IOU. He wants you to have it.” It was a nearly new Ocean City reel with new linen line on a brand-new Montague rod. There was also a bag of sinkers, hooks, and a new spool of Ashaway Dacron line. It was Christmas come early, but Cynthia wouldn’t let me go without a hot chocolate, a delicious jelly donut, and another wet brandy smooch.

I sat in one of the booths, sipping my drink and savoring my donut. Since Mom had warned never to walk into a room with food, drink, or candy unless you had enough to share, it was a caution well taken as I ate my reward before heading to the club.

There were several members’ cars parked at the top of the street as I headed down the stairs to the club where smoke billowed from the chimney. I walked upstairs and poked my head around the corner, when Bento spotted me and yelled for me to come over. The men were sitting around the woodstove, sipping from bowls of hot chowder and eating crusty Italian meatball sandwiches. Bento put his arm around me, looked me in the eye, and said, “Boy there is no such thing as a bad Christmas…not when we have thoughtful friends and one another.” He sent me to the kitchen, where the caretaker dipped the ladle into the pot and served me a bowl of chowder before stuffing three big meatballs into a torpedo roll. “Stop by the kitchen on the way home and I’ll put some together for your mom.”

Life was good. We sat in the warmth of the kitchen, eating a simple meal, each deep in thought about the importance of the coming holiday. I was thankful for what I had and not what I wanted. Like my friend Bento, I have never had a bad Christmas. My family never begrudged me for refusing a high-paying job and choosing instead to scratch a living as a fisherman, guide, author and lecturer. The only disappointments I ever experienced on Christmas were from being unable to provide my family with what they deserved rather than only what we could afford.

God bless you and yours, and may the spirit of Christmas and charity forever live in your hearts.